"Your Highness" doomed by lame jokes 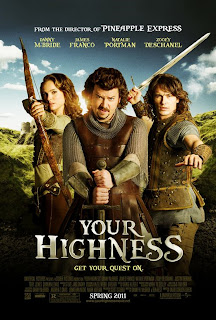 In a nutshell, "Your Highness" is "The Princess Bride" with penis jokes. Never amusing as you want it to be, this medieval stoner-comedy feels like the work of 15-year-old boys, old enough to see an R-rated goof like this and immature enough to find four-letter-words hilarious. And like so, it feels like a big-budgeted excuse to have director David Gordon Green ("Pineapple Express") and his college buds (co-writers Danny McBride and Ben Best) throw around a lot of sexual innuendos and naughty words that aren't used cleverly in the least. Speaking of Green, his "Pineapple Express" had to be viewed high to make it funnier than it really was, so maybe the same goes "Your Highness" (pun intended with this title).

Milking laughs where there are none, Danny McBride plays Prince Thadeous, the bumbling slacker brother of noble hero Fabious (James Franco). When Fabious's bride-to-be Belladonna (Zooey Deschanel with cleavage) is taken by an evil wizard (a goofily over-the-top Justin Theroux), Thadeous must prove himself in the rescue quest. Despite a few perversely outlandish touches that only a pot-brownie-induced filmmaker might brew up (courtsey of the horny, fey Great Wize Wizard), what could've been a bawdy (and potentially funny) lark is just a lowbrow mess of a lame, lazy script and missed opportunities. The fantasy effects are of the cheesy "Dungeons & Dragons" sort and there's bloody swordplay to be had, but it's the witlessly crude humor and flat punchlines that doom "Your Highness."

At least Natalie Portman shows up, playing it straight as tough, hot-chick warrior Isabel, and sports some class even if one wonders what the hell she's doing here. (Take note Mr.Skin.com users: you get to ogle Ms. Portman in a thong. We won't even mention actor Toby Jones' nude scene.) But if you really must see overqualified Oscar big shots like nominee Franco and winner Portman "just having fun" (a.k.a. doing it for the paycheck), wait four months, buy a case of beer with some friends, and rent it. Talk about a party foul.