iRomance: Lovely, gentle, joyous "Her" tears at the heart 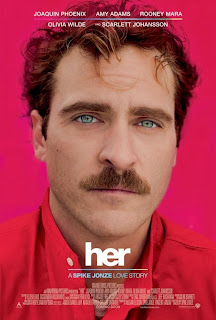 Putting out only his fourth feature film in 14 years, singular director Spike Jonze (2009's "Where the Wild Things Are") works from his own original screenplay this time and still plays to the rhythm of his own tune. Even without the post-modern, unconventionally brilliant mind of Charlie Kaufman (1999's "Being John Malkovich" and 2002's "Adaptation."), "Her" has such a daringly unusual and excitingly unmissable premise that is willing to explore loneliness and a romantic connection between humanity and artificial intelligence with Jonze's own off-kilter and thought-provoking sensibilities. Weirdly wonderful, open-hearted, and heartbreakingly beautiful, "Her" is a sublime cinematic joy with a gentle intimacy, melancholy and grounded universality about the human experience.

Theodore Twombly (Joaquin Phoenix) writes others' romantic letters for a living, but he's nearly numb to human contact. He has yet to finalize his divorce with writer wife Catherine (Rooney Mara), still clinging to their once-happy relationship. Theodore lives alone in a spacious apartment, only speaking with an avatar in the video games he plays and neighbor Amy (Amy Adams), whom he used to date and is now married to an opinionated windbag (Matt Letscher). Then he purchases an OS1, an individual operating system that knows its user and can rifle through e-mails, and downloads Samantha (voice of Scarlett Johansson) on his computer. Soon, they strike up a friendship, staying up talking, and Theodore goes on a blind date that doesn't go anywhere. But he has Samantha, who's intuitive and curious with so many thoughts, and she can evolve like any human, with the desire to "learn everything about everything." They both find themselves falling in love, even if one of them isn't physically there. Is it a real relationship, or even monogamous?

Languid and deeply profound, "Her" works beautifully through and through on multiple levels. Writer-director Jonze plays on the notion that we are all in love with our phones and computers, which take over all human connection, and takes it to a literal, deeper level. Being in love is to feel alive, even if it's short-lived, and it's a masterstroke that Theodore is never judged for finding love with an OS that is a voice without a body and not tethered to time and space. The screenplay intelligently handles this cockeyed relationship with as much delicacy as one with another human, whether it be the same sex or a different race. Aside from Theodore's ex-wife, nobody flinches at this hopeless romantic dating his OS, not even the crowds of people when Theodore and Samantha share a "Sunday adventure" at the beach. Amy actually has a friendship with an OS, and Theodore even goes on a double date with reception co-worker Paul (Chris Pratt) and his girlfriend (Laura Kai Chen), both of them chatting with Theodore's phone as if Samantha were a real person. Jonze pulls off the seemingly unviable and never takes a wrong turn as things could easily slip into the creepy and ridiculous, especially when Theodore and Samantha consummate their relationship. It's offbeat, sure, but nothing short of truthful. Unpredictably, too, Samantha never becomes a malevolent meddler or stalker, even if she can feel human emotions of sadness, jealousy and confusion.

Often an emotionally chilly performer who can be hard to penetrate ("The Master," anyone?) but always challenging himself, the chameleonic Phoenix is radiantly moving, sensitive and sympathetic here as a tender lost soul. As Theodore, he uncovers remarkably credible and heartbreaking emotions out of a relationship with his OS. It's utterly breathtaking to just watch him interact so joyfully and naturally with a voice. Samantha Morton originally did the vocals for Samantha, but Johansson is a perfect fit. As the disembodied Samantha, she creates a fully realized character—witty, sexy, generous, helpful, vulnerable—and a playful, comfortable, genuinely loving chemistry with her co-star just through her breathy, soothing voice. In a perfect world, Johansson would earn some sort of accolades. Starting to work with more artistically interesting filmmakers, like David O. Russell and Paul Thomas Anderson, and proving her versatility again and again (especially after being va-va-voomy and complex in "American Hustle"), Adams is naturally funny and down-to-earth as frumpy video game designer and documentary filmmaker Amy. The rest of the cast excels, no matter the size of their role: Mara communicates a relationship history in just a smattering of scenes with regret and bitterness and generously keeps Catherine from being just a stone-cold bitch; Olivia Wilde is her charismatic self, playing a smart, beautiful woman who, on a blind date with Theodore, really likes him but doesn't want him to waste her time; and Portia Doubleday brings a sense of vulnerability and heartbreak without saying a word as a surrogate date. Also, two of the most hilarious uses of voice go to Jonze, himself, as a cute, garbage-mouthed alien in a virtual video game, and Kristen Wiig, as chat room gal SexyKitten.

Another deft touch is the story's time and place. The setting is Los Angeles, but the time is ever so slightly futuristic. A subtle and convincing vision of the smoggy city, it's cleaner and even more advanced with cutting-edge technology and a trend of high-waisted men's fashion. It's pretty prescient and not far out of the realm of possibility of where we're headed in years to come. Jonze also makes stirring use of mixing dialogue-free flashback memories with the present scene's audio. Spare without being sterile, the film glows from the gracefully fluid and alluringly warm cinematography by Hoyte Van Hoytema (2011's "Tinker Tailor Soldier Spy") to Owen Pallett's music score matched with the poignant contribution of Arcade Fire and Karen O's aching "The Moon Song" to inform the film's themes. The sweetest, most innovative and most perceptive film about love in the digital age handled with the utmost maturity, "Her" feels and thinks outside the box with a heart and soul. It's as unique and perfect a film as you will see this year, and it's hard to imagine anyone not adoring this lovely, moving original.