Time's a-tickin', baby: Despite one of Walker's stronger turns, "Hours" not worth time 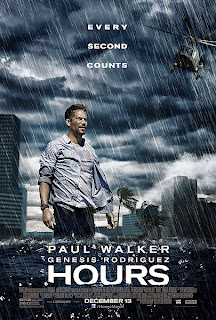 It's August 29th, 2005, during Hurricane Katrina. Your wife dies in the hospital while giving early birth to your baby daughter, who must remain on a ventilator for 48 hours. Oh and, by the way, Hurricane Katrina is bringing on the power outages and rising floodwaters, which stand in your way of keeping your baby alive. That's the nifty B-movie setup that drives the low-budget pressure-cooker thriller "Hours," the directorial debut of screenwriter Eric Heisserer (who wrote the 2010 "A Nightmare on Elm Street" remake, the 2011 prequel to "The Thing," and "Final Destination 5"). With a heavy heart, it is also one of the now-late Paul Walker's last films, and he is the only thing that keeps "Hours" from falling into complete incompetence.

Walker plays Nolan Hayes, a man arriving to St. Mary's Hospital in New Orleans with his wife, Abigail (Genesis Rodriguez), who has gone into labor five weeks early. After the baby girl survives her mother, Nolan can't seem to accept Abigail's death (and understandably so). With his premature daughter having to be hooked up to a ventilator inside of an incubator for two full days, he stays alongside as Hurricane Katrina hits and breaks the windows of the lobby waiting room. Then the hospital evacuates, the electricity goes out, and a nurse and doctor promise to come back for Nolan and his baby. To make matters worse, the ventilator's backup battery only charges for a few minutes before Nolan has to hook it up to a generator and hand-crank every few minutes. What else could happen?

More in theory than in practice, the ticking-clock plot is tense and a mostly unexploitative Hurricane Katrina backdrop gives the hook the convincing that it needs, but rather than being sustained for its full 97 minutes, "Hours" just grows more frustrating, contrived and strained. Front and center in every scene, Walker single-handedly takes on the challenge and luckily sells it with credible emotion. Nolan is set up as a desperate father who will do anything to save his daughter, but the actor is still not helped by cringe-inducing dialogue to his breathing baby daughter and flashbacks that don't lend much emotional weight as they should. It's no fault of the luminous Rodriguez, but given the writing, a tacked-on vision of a ghostly Abigail also proves to be eye-rolling. Anyone would flail with what's written for them on the page. While the premise isn't a relatable scenario where no one could be prepared, the plausibility of the character's decisions is stretched like a Stretch Armstrong when Nolan is forced to leave his daughter for less than two minutes, taking his time when he climbs several flights of stairs to go to the roof and signal a helicopter. If the heart-tuggery involving keeping an infant alive and a specific natural disaster weren't enough, Heisserer throws in a rescue German Shepard, shots of Adrenalnie (something the writer used in his Freddy Krueger reboot), and clichéd, brutish looters, the latter being a case of circumstances that up the stakes too much.

Cemented by Walker's empathetic turn as a newly single father, "Hours" could have been a leaner, more intense thriller but ends up not being really worth the effort. The film was coincidentally scheduled for limited release well before Walker's fatal car accident, and with a heavy heart, he was just beginning to push himself in a more emotional direction and stretch his acting muscles a bit. The 40-year-old could have been taking the same path as Matthew McConaughey, who was a movie star and has now become such a tour-de-force character actor, but now, we'll never know.