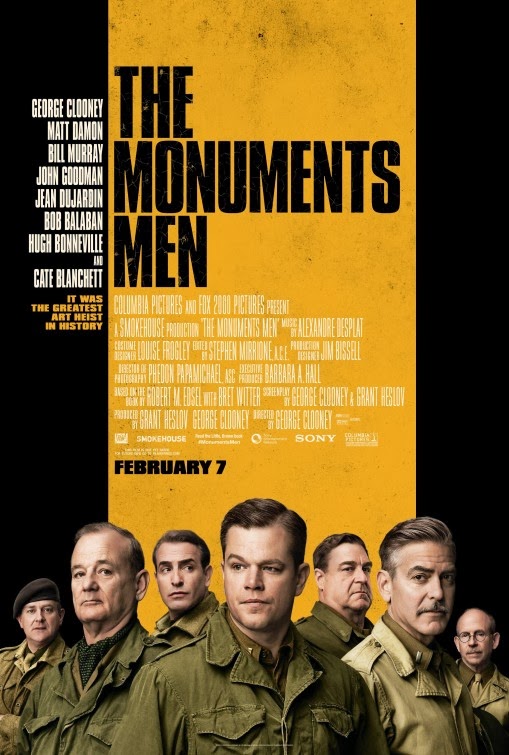 A historical account of the Monuments, Fine Arts, and Archives program, "The Monuments Men" cannot decide if it's a jaunty, nostalgic wartime "Ocean's Eleven"-y lark or if it has loftier aspirations to be a historically important period piece. There is an interesting true story here to tell with an all-star roster of talent on hand, and George Clooney directing and co-writing with previous collaborator Grant Heslov (2005's "Good Night, and Good Luck." and 2011's "The Ides of March") should have been a lock for something worthwhile. A monumental travesty, it is not, but still to much disappointment, a history-making treasure hunt that sounds like a tense race-against-the-clock nail-biter on paper comes off as a curiously stodgy non-event on screen.

At the height of World War II, the Nazis stole 1,000 years of important pieces of art for Hitler's not-yet-built Führer Museum. Once art historian Frank Stokes (Clooney) receives the go-ahead from FDR to find and protect all the priceless collections, he assembles a ragtag platoon, consisting of art restorer James Granger (Matt Damon), architect Richard Campbell (Bill Murray), sculptor Walter Garfield (John Goodman), French designer Jean-Claude Clermont (Jean Dujardin), theater director Preston Savitz (Bob Balaban), and alcoholic Donald Jeffries (Hugh Bonneville). The Allied team would then undergo army training and be deployed to Europe (four of them were broken up into pairs). The rest is history, but Stokes and his men all risk their lives, hoping to preserve the paintings and monuments and return them to their rightful owners before the cultural treasures are destroyed.

Ephemeral rather than succeeding on a lasting dramatic level, "The Monuments Men" is the slight, scattered Cliffs Notes treatment of a history lesson, being based on Robert M. Edsel's "The Monuments Men: Allied Heroes, Nazi Thieves and the Greatest Treasure Hunt in History." It's uninvolving, meandering, and more than a little dull, giving the viewer a good chunk of time to contemplate what could have gelled with a more decisive tone, more depth, and more emotional attachment. In spite of its moniker, the film isn't really about its courageous men as much as it's about the event in summary, which is fine, but that approach doesn't exactly make for the most exciting drama. Two men gave up their lives for priceless pieces of art, but we never actually get a sense of who any of the "soldiers" are or why they are all chosen. Clooney's lightly wacky touch also seems tone-deaf on occasion. A character bumbles his way onto a land mine, leaving the bumbling architects to get him off of it safely. Another man finds the Madonna and Child statue where he least expects it. These moments should lend some sort of suspense and weight, or make us feel their passion for art and its preservation, but do not. Shouldn't the salvaging of art with lives at stake be as compelling to the audience as it is for the characters?

The promising cast is surely the bright note, funning around in period costumes and coasting along on their innate personas, but the characters they play are so negligibly written as superficially colorful heroic types without being fleshed out beyond one defining trait apiece. Clooney's Stokes is rah-rah about art; Damon's character speaks poor French; Goodman plays another blusterer named Walter ("The Big Lebowski," anyone?); the charming Dujardin ("The Artist") smokes; Bonneville has a family, etc. Cate Blanchett is also underutilized in the thankless part of French museum curator-cum-resistance member Claire Simone, especially when she's forced into a tentative romance with Damon. As a result, the banter between some of them isn't very satisfying and, when a few men lose their lives, it's emotionally frigid. Granted, Murray and Balaban (whose bespectacled expressions are irresistible alone) are the easiest to watch and carry a few comedic moments, and there is one potential case for stirring emotion with a recording of the melancholy "Have Yourself a Merry Little Christmas" playing over the speakers at a war camp.

Photographed with vintage polish by Phedon Papamichael ("Nebraska") and scored with military marches by composer Alexandre Desplat, the film has fine technical credits across the board, no doubt. Ultimately, though, it comes down to the failure of the storytelling. Rushed in the beginning, then amusing in spots, and sluggish thereon, "The Monuments Men" just feels stripped of the dramatic urgency and proper momentum it needs in order to be cinematic. In fact, it all has the inertia of an 8 a.m. art-appreciation course with really comfy chairs. Good night.