Father Kills Best: Wacky "3 Days to Kill" tries to be 3 movies too many 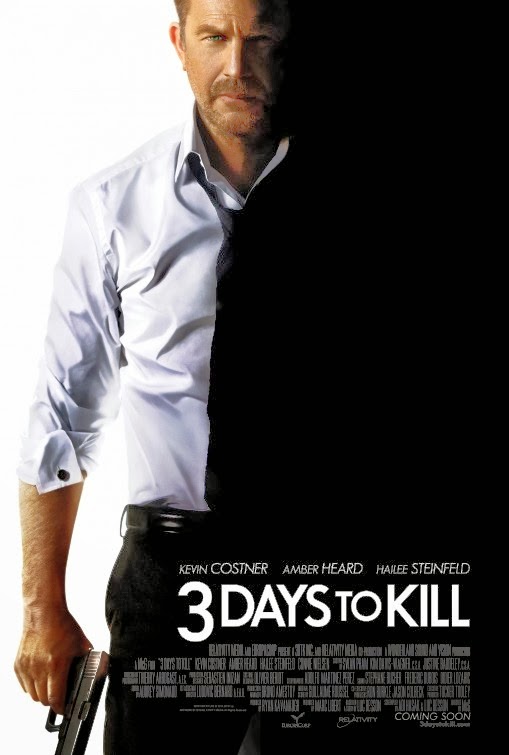 Unless they are intended that way, some movies can be like schadenfreude — you laugh at them, not with them. "3 Days to Kill" isn't the worst way to kill time, but it's such a "what the hell?" curiosity that it's hard to know how to take it. Misguided and zonky in equal measure, this could only be the brainchild of music-video director McG (who helmed both high-energy "Charlie's Angels" movies) and one Luc Besson, who co-wrote the screenplay with Adi Hasak (2010's "From Paris with Love"). That combination makes for a gleefully nonsensical, cuckoo-bananas hodgepodge that doesn't know what it wants to be, so it ends up being a Eurotrashy pummel-'em-with-bullets actioner, a black comedy, and a domestic drama with an incidental plot device concerning cancer, all rolled into one strange package. More can be less, but here, more is just plain wacky.

Jason Statham and Liam Neeson were apparently unavailable, so since Kevin Costner is having a moment again, he has been cast as the token badass. Costner plays Ethan Renner, a weary Pittsburgh-blooded CIA assassin who's killed his share of baddies and hasn't had a sick day in all of his thirty-two years in the field. His latest targets are two international terrorists known as The Albino (a bug-eyed, scarily gaunt Tómas Lemarquis) and The Wolf, but the former escapes and the latter has not yet been identified. Being diagnosed with a brain tumor that spreads to his lungs, Ethan is the one who's terminal now. While in Paris, he decides to reconcile with his estranged wife, Christine (Connie Nielsen), who gives him a second chance after hearing of his three-to-five month expiration date, and 16-year-old daughter, Zoey (Hailee Steinfeld), who's reluctant to even call Ethan "Dad." Naturally, the antiquated movie rule is that, just as a hitman thinks he's out, he's pulled back in for one last job. There's a catch this time, though, when disguised operative Vivi Delay (Amber Heard) offers him an experimental drug to extend his life. Somehow, Ethan will have to make up for lost time as an absentee father to Zoey and torture bad guys for information (and parenting advice). He can either die or kill.

From a standpoint of serious film criticism, "3 Days to Kill" is a wishy-washy mess with incongruous shifts in tone and almost-surreal daffiness. It either takes itself too seriously, as a woman has her head decapitated in an elevator, or too lightly, to the point that Ethan gives his daughter fisticuff tips after she gets sent to the principal's office for punching another girl and later tells her, "It's easier to lie than to tell the truth." The film has such a problematic identity crisis with so many half-measures that it all feels so tonally off or just atonal. For no reason at all, a Malian family of squatters have sought shelter in Ethan's flat, redecorating and getting ready for the patriarch's daughter to have her baby. It's a boy, so guess whom they name the baby after? Icona Pop's dance-pop song "I Love It" even gets its own deadening running joke, wherein Ethan will be ready to torture one of The Wolf and The Albino's toadies before Zoey calls. Can you guess her chosen ringtone? In one of the many times Zoey calls in (another in which she's actually sitting on a roller coaster track), she wants a spaghetti sauce recipe to make for dinner, and what do you know, Dad has a Sicilian accountant named Guido with him and duct-taped to a toilet. In other mind-boggling father-daughter time, Ethan rescues Zoey from date rapists in a rave restroom after swigging a bottle of vodka to relieve him of his drug's hallucinatory side effects, and then he lugs around a purple bicycle, so eventually he can teach Zoey how to ride it, complete with "Dad, I'm doing it!" happiness and bystander applause. Then there is a scuffle in a charming little supermarket that is so abrupt and over-the-top, throwing in a meat slicer for good measure, that it's predicted to be a dream sequence, until it's revealed differently.

Even at 59, Costner fits the role of Ethan to a T, proving his mettle that his star quality from the '90s has not been lost and that he can make a scarf look manly. Gruff and droll, he might be the only actor to get the most grip on this erratic, chowder-headed material. As Zoey, Steinfeld manages the teenage-girl rebellion and whininess without irking the viewer too much. Five bucks to anyone who can decipher what the hell Amber Heard is being directed to do here. Dressed in an assortment of black fetish leather and a different colored wig for every occasion as a vampy femme fatale, the talented actress seems to waltz in from an entirely different, more cartoonish movie that could be from some uncredited comic-book property. She cheekily plays Vivi Delay (that's her name, don't wear it out), who might as well be a kinky figment of Ethan's imagination, and her intermittent scenes might be the loopiest of all.

Taking chances in wanting to be more than a routine action movie, "3 Days to Kill" is something of a schizoid hoot that won't be accused of being boring. Director McG has visual style to burn, throws on an appealingly edgy techno score, and actually sets things off on a solid foot with a tense, involving, tautly cut pre-credit sequence in and around a hotel. Once everything is well underway, there's also a pretty thrilling car chase. It's too bad then that this has to be one of the most noticeably sloppy studio releases seen in a while, too. Apparently, editor Audrey Simonaud had no other takes to work with in the editing bay; if the actors' dialogue doesn't always match the movement of their mouths, other lines were clumsily re-dubbed with ADR. This is a distracting gaffe, and it happens on more than five occasions to be inexcusable. Also, the film was clearly meant to be R-rated but safely landed a PG-13. Who actually thought that any viewer with the power of sight wouldn't notice the censorship, via a laughably fake cloud of CG smoke, in a strip club? As if crippled by reshoots or principal photography taking place before anyone got the memo of what kind of movie they were actually making, "3 Days to Kill" is only watchable as a One Last Job thriller. It's too tone-deaf to be a comedy, and no matter how many flashbacks of little Zoey get thrown in our face doesn't make it any less forced or perfunctory as a family drama. It can be fun, but usually it's for the wrong reasons.