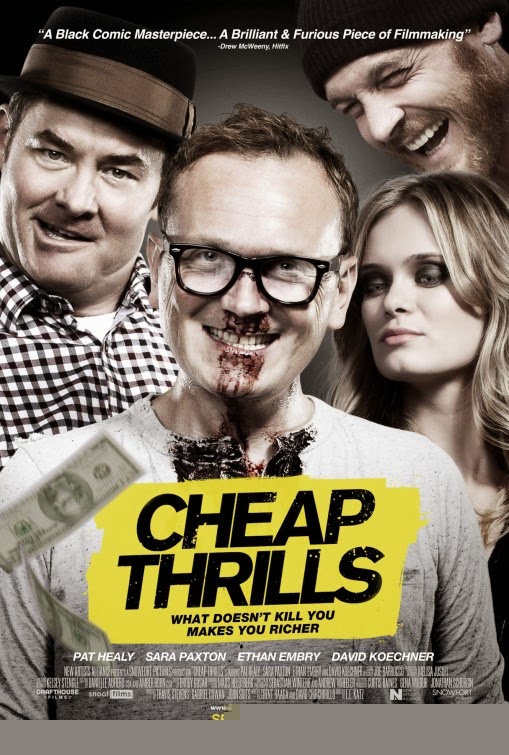 When the film played at the Alamo Drafthouse during its Fantastic Fest premiere last year, the low-budgeted "Cheap Thrills" actually inspired willing audience members to follow through on a couple of dares. One man tattooed the film's title on his buttock. Another dipped his genitalia in a bowl of Sriracha hot sauce to collect $100 cash. That's the power of cinema for you, folks! Both dangerously demented and darkly provocative, this chokehold of an asphalt-black comedy, exhibitionist horror-thriller, morality play, and satirical socioeconomical schism is a nasty piece of business. It's not for mass audiences who often ask the question, "What sicko thinks up this stuff?" but it does hold the top spot for the bat-shit craziest, most brutal and most boundlessly twisted film of the year. "Cheap Thrills" brings it, and how!

Craig Daniels (Pat Healy) is down on his luck. Giving up on his writing career and working at an auto shop, he has to support his wife (Amanda Fuller) and infant son, only to receive an eviction notice the same day his boss announces their downsizing and lets him go. Drowning his sorrows at a dive bar, Craig then runs into his estranged broham, Vince (Ethan Embry), a scruffy ex-con who now works as a tax collector. They haven't seen each other in five years and catch up on their missing years before the rich, loud, and coke-snorting Colin (David Koechner) buys them a $300 bottle of Tequila. He just wants to party and show his bored younger wife, Violet (Sara Paxton), a fun birthday, no matter how many hundred-dollar bills he frivolously throws down. Colin starts placing innocuously stupid bets, challenging Craig and Vince on who can finish a Tequila shot first for $50 or $200 to the one who can get slapped by a rough-looking barfly. Seguing to a strip club, a slap to a stripper's behind and a punch to a bouncer's face make the two hapless losers richer. Once they retire to the strange couple's lavish Los Angeles home, Colin really ups the ante—and the payoffs, thanks to his safe of $250,000 in cash, that could take away both guys' financial worries. If Craig doesn't want his family to live on the streets, he will do anything, even if that means abasing his being. Psyching each other out to destructive ends, Craig and Vince are game, but holding their breath will have to be far from their threshold of appallingly vile dares.

The ballsy, incendiary feature debut of director E.L. Katz, scripted by David Chirchirillo and Trent Haaga, "Cheap Thrills" is made with sheer daring and unruly abandon. It could be read as socially irresponsible, but it is a startlingly cynical and culturally relevant cautionary tale that takes a lean and really mean premise—like the "Alfred Hitchcock Presents" TV episode of "Man from the South" or Quentin Tarantino's segment in 1995's "Four Rooms"—and runs with it to perverse, unforgiving extremes in the how far would you go? mold of the thoughtfully nasty "Would You Rather." As the dares intensify and tempers rise inside Colin and Violet's humble abode, this four-hander becomes an obscenely grim and gonzo ride of sneaky, darkly uncomfortable giggles and amoral, ironic shocks. Were it not for our rooting interest in Craig, the film might have strictly been a, yes, cheap-thrills exercise in icky human degradation. Instead, it provokes some disturbing questions about human nature when one is faced with a moral quandary. How far would you go to become financially stable? Can a price be placed on everything? Would you choose every worst-case scenario over being poor? The "oh, come on!" factor does get increasingly ratcheted up to a radical "Fear Factor" vomitorium, almost crossing the line into gross-out schlock, and yet, you believe Craig and Vince have been clouded of all judgment and stripped of any moral compass to act like base Pavlovian dogs.

Seeing a chance to make things right after reassuring his worried wife on the phone, Craig is no longer clear-eyed and will never be the same after this long, crazy night. Character actor Healy gives Craig a pathetic, desperate sadness and slipperiness, venturing into the heart of darkness and making terrible decisions to turn his financial situation around. Though he's worked since, Embry is far removed from Preston Meyers in "Can't Hardly Wait," imbuing the live-wire Vince with a scary intensity, especially when wired on Colin's "party favors." No real background is given to sleazy ringmaster Colin, who can make two friends do anything when dangling more money than he knows what to do with in their faces, but Koechner plays up his boisterous comic persona with homicidal glee. Even with maybe less than a full page of dialogue, the sweet-faced Paxton (who shared a fun and loose chemistry with Healy in "The Innkeepers") gets to break free as the enigmatic, fascinatingly disturbed Violet. She only seems indifferent at first, texting on her phone in front of company, but gets a sick thrill out of quietly pulling the strings. Also, the cinematography by Andrew Wheeler and Sebastian Winterø is slickly dynamic and intimate, bringing a neon-infused, nightmarish quality to the early scenes' seedy bar and strip club.

Experiencing the film is like refusing to look away from a gasp-inducing accident. The viewer will be led blindly and be left wondering just what crazy, nail-biting direction the film will escalate to next. No doubt about it, "Cheap Thrills" is an understandably acquired taste and will be split down the middle by audiences, but it has no reason for compromise and doesn't have the time to wear out its welcome, burning slowly but surely at a compact 85 minutes. So effectively revolting and outrageously savage, this little morsel of misanthropic insanity punches you in the gut and makes sure you feel it in its lingering final moments. You might need a leather belt to bite down on, while others will choose a barf bag.