Check into the Dollhouse: Despite some vacancy, "Grand Budapest Hotel" a velvety delight 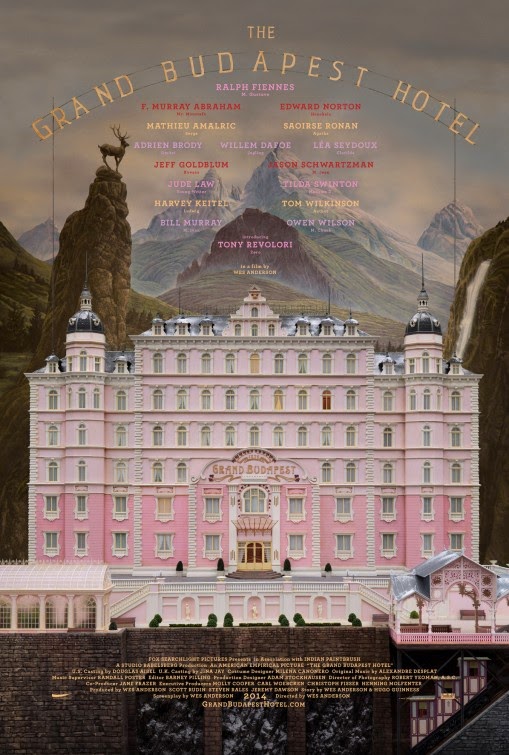 "Twee," "quirky," and "precious" have been used to disparagingly describe filmmaker Wes Anderson's specifically stylized live-action (or, in the case of "Fantastic Mr. Fox," stop-motion) dioramas. Given his one-of-a-kind aesthetic of turning artificial sets into pop-up storybook worlds, the filmmaker is unmistakably gifted. So meticulously detailed and faultlessly costumed and set-dressed, his films can verge on breathtaking, fussily designed dollhouses with no one home. Take his one-two punch of the annoyingly obtuse, emotionally empty "The Life Aquatic with Steve Zissou" and "The Darjeeling Limited," both of which were marvelous to look at, but like wax fruit, there wasn't much there in terms of heart or much life. By now, his films are for those already on-board with his signature style. Though lacking the nuances of his other gems, Anderson's eighth and latest, "The Grand Budapest Hotel," is an inspired, velvety truffle that exhilarates with a delightful vibrancy, an enchanting sense of wonder, and zany amusement.

Resembling the sprawling structure of Russian nesting dolls, "The Grand Budapest Hotel" begins with a young woman visiting the monument of a writer of the book, "The Grand Budapest Hotel." In 1985, that writer (Tom Wilkinson) addresses us directly about his book. Flashing back to 1968, his younger self (Jude Law) is told the story of the luxurious, once-celebrated Grand Budapest, a hotel topped on a mountain in the fictitious European country of Zubrowka, by its final owner, Mr. Moustafa (F. Murray Abraham). In war-torn 1932, the heyday of the hotel, Moustafa worked as a lobby boy named Zero (played by newcomer Tony Revolori) and sidekick to the hotel's concierge, Monsieur Gustave H. (Ralph Fiennes). He was a genteely groomed, heavily perfumed, and sexually ambiguous dandy who had a taste for rich, old, blonde women. The inner story gets underway after the death of one of Gustave's rich, old blondes, Madame Desgoffe-und-Taxis (Tilda Swinton in old-age make-up). In her will, she left him a priceless Renaissance painting, called "Boy With Apple," much to the chagrin of her heirs, greedily incensed son Dmitri (Adrien Brody) and his evil henchman Jopling (Willem Dafoe), leading to Gustave being framed for Madame D.'s death and arrested for murder. With the help of Zero and his young love, Irish pastry baker Agatha (Saoirse Ronan), Gustave would eventually escape prison. 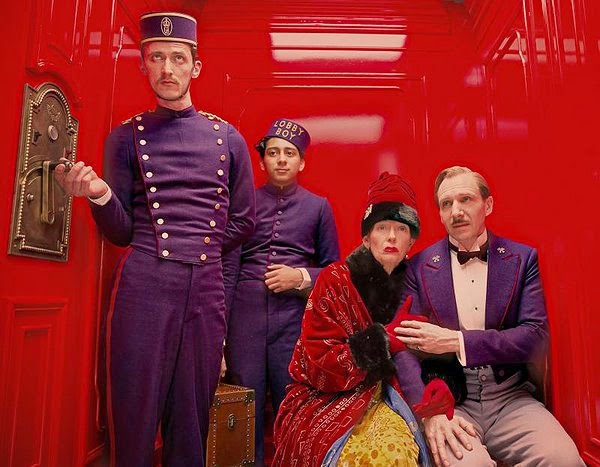 A screwball European-style murder-mystery farce, inspired by the writings of Austrian writer Stefan Zweig, "The Grand Budapest Motel" is drolly arch and whimsical in ways only a filmmaker like Wes Anderson can get away with. It's so light and playful and unpredictable, speeding along at a breathless pace, that even the abrupt murder of a pussycat and the severing of fingers are deftly treated as guffaw-inducing absurdities. Played as a caricature but with bursts of anger and plenty of savoir faire, Fiennes is an often brilliantly funny treat to watch as the well-to-do Gustave, and his "sacred bond" with newcomer Revolori, as Zero, adds a much-needed sweetness. A mustachioed Brody is hilariously harsh as Dmitri and a vampiric Dafoe menacing as Jopling. Otherwise, the characters are slighted as colorful constructs, even if the film is filled to the gills like a Muppets movie by notable faces (Edward Norton, Harvey Keitel, Bob Balaban, Mathieu Amalric, Léa Seydoux, and Anderson regulars Bill Murray, Owen Wilson, and Jason Schwartzman). Some of them are practically unbilled walk-ons, but it's a joy to see so many guests check in.

The Wes Anderson stamp is always evident. Every boxy, head-on frame is exquisitely composed with a symmetry and rhythm, right down to his fluid pans and trucking shots to the shifting aspect ratios in each plot nesting. Anderson has such a loving, just-so eye for fastidious detail and a majestic mise-en-scène, to which production designer Adam Stockhausen ("Moonrise Kingdom"), the art directors, and Anderson's longtime cinematographer Robert Yeoman all deserve a great deal of praise. Here, the creative decisions never take time getting used to; instead, they're an intoxicating delight. There is even an unexpected thrill to the mystery-thriller elements, particularly one murderous sequence involving Jopling stalking a lawyer (Jeff Goldblum) in and around an art museum, as well as a madcap chase on skis that blends stop-motion animation and miniatures with live-action slapstick.

Though there is a subtle hint of melancholy and "out of time" meaning to the whole story, the film doesn't quite resonate on a deeper level of human feeling like Anderson's special previous outing, "Moonrise Kingdom." Still, "The Grand Budapest Hotel" is great fun and stands as a satisfying experience, one akin to devouring a rich confection so quickly that you'll actually want that second piece. It won't convert the "twee"-, "quirky"-, "precious"- labeling camp, but give this to Anderson: his films are distinctly his, as if we're peering into his imaginative brain.