If You Build It, They Will Come: Great vision lost at sea in bloated "Noah" 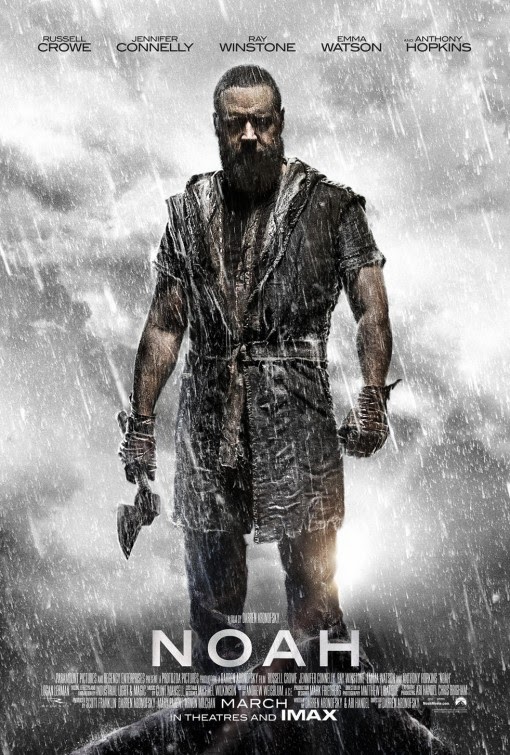 Careful not to offend or alienate Christian audiences, Paramount Pictures put out a disclaimer that bold auteur filmmaker Darren Aronofsky's "Noah" was merely "inspired" by the short biblical story of Noah's Ark in the Book of Genesis. As if that weren't enough, fundamentalist groups were already up in arms about the atheist director of "Pi," "Requiem for a Dream," "The Wrestler," and "Black Swan" taking artistic license to tackle his interpretation of the Old Testament's text, even before seeing the film itself. Like it even needed to be spelled out, "Noah" was never going to be a work of subtlety or a by-the-book literalization for the Sunday School kids. Converging art-house and mainstream studio sensibilities, the whole of the final product—a monumental, nearly two-and-a-half-hour epic with a blockbuster-sized budget from a brief story—comes nowhere near its glimmers of audacity and daring. But between the film's big ideas and bigger spectacle, its maker at least went for it.

A descendant of Adam and Eve's son Seth, Noah (Russell Crowe) has a dream of evolution and the drowning of all of humanity (even snakes). As the beginning of a mission sent (but not heard) from The Creator, Noah senses the annihilation of all mankind is approaching. First, he seeks guidance from his grandfather, Methuselah (Anthony Hopkins), from a mystical tea that gives him a vision — build an ark to house every innocent animal species, two by two, as a catastrophic flood will purify the wickedness of humanity. Noah, his wife Naameh (Jennifer Connelly), their three biological sons Shem (Douglas Booth), Ham (Logan Lerman) and Japtheth (Leo McHugh Caroll), and adopted daughter Ila (Emma Watson), whom they saved from destruction and a fever when she was young, are then assisted by "The Watchers" (fallen angels who were cast out of Heaven and turned into giant rock creatures by God) to construct the ark. Before the flood comes, the savage Tubal-cain (Ray Winstone), with his men in tow, makes it his mission to kill Noah and take over the ark. Heeding his mission that has been bestowed upon him by their Creator, will Noah save the world from drowning in sin, or has he misinterpreted everything?

A collaborative effort by Aronofsky and co-writer Ari Handel, "Noah" is ambitious enough to fill in the blanks of the basic allegorical tale and then goes even further with pro-environmentalism, magical snake skin, and echoes of Abraham and Isaac. The film is actually most interesting when it seems carved from Aronofsky's creative mind. Regardless of subverting purists and anyone's expectations, it is not until Noah's faith starts to border on disturbed psychosis that the film creates more drama and tension. The earmarks of dark psychological horror and obsessive delirium, not unlike most entries in the director's body of work, are welcomely strange and batty compared to everything else that largely feels clunky, dreary and plodding. Working on a much larger canvas than the filmmaker is used to (aside from "The Fountain"), "Noah" is immense in scale, but Aronofsky's creative decisions do range from visionary to baffling. Aided by Clint Mansell's booming score, the opening-and-then-recurring sequence of Creation, with the serpent slithering through the grass and the forbidden fruit, is striking and primitively designed with rapid cutting. There is also a bleak hallucination, in which Noah envisions live animals being ripped apart and eaten by an angry mob in a marketplace, that is positively nightmarish and unexpectedly unsparing. The sweeping sights of a vast, dusty post-apocalyptic wasteland, shot on-location in Iceland by Aronofsky's cinematographer Matthew Libatique, produce a sense of awe and the shots of silhouetted characters against the colorful night skies are beautifully realized. And when the inevitable flood comes, it is spectacular to behold. The biggest miscalculation is the addition of "The Watchers," lumbering, stone-covered angels that may exist in The Book of Enoch but look like a silly cross between Michael Bay's Transformers, Peter Jackson's Ents, and Ray Harryhausen's stop-motion creations. (They also talk but are unintelligibly voiced by Frank Langella, Nick Nolte and Mark Margolis.) Whenever these protectors (and, for one of the sons, playgrounds) are on screen, the film grinds to a halt. Also, the animals get the shaft. As variably convincing CG creations, two of every animal board the ark and are then sedated by man-made incense (one inventive detail that makes sense as a taming method).

Russell Crowe is given his due in the role of Noah, capable of conveying earthiness, full devotion to his duty, but also a little madness. He shows commitment and an eventual intensity once Noah's task becomes a burden and he, himself, becomes a rigid, self-righteous megalomaniac who insists on sealing man's fate. Instead of being heroically portrayed as a purely good, white-bearded man with a staff, Crowe gives the part the shading it needs. Jennifer Connelly, Crowe's "A Beautiful Mind" co-star, fleshes out the role of Naameh with soul and gravitas, especially in one of the film's more affecting scenes when she confronts her husband who misinterprets their Creator on what is just. As Shem and Japtheth, Douglas Booth and newcomer Leo McHugh Carroll playing Noah and Naameh's oldest and youngest sons do, indeed, play characters with those names, as that is all that can be said for them. Logan Lerman gets a little more to do as lonely middle son Ham once he feels betrayed by his father. Doing more than fulfilling her page-to-screen duties, though, Emma Watson gives the most wrenching performance as a young woman whose stomach scar would render her barren before a miracle happens. Anthony Hopkins provides the film's few flashes of humor as Noah's berry-eating grandfather, Methuselah. And, though Noah isn't always presented as a flawless hero, the real antagonistic role goes to a glowering Ray Winstone who attacks the part of Tubal-cain with relish.

"Noah" is just about as uneven as a movie can get. Stirring, overwhelming moments and some thoughtful takeaway about divine obedience vs. free will and earth-bound love become lost in a bloated running time, already hampered by torpid pacing that gives in to occasional sedation. When the film works, it really works, but when it doesn't, it's a heavy-handed slog. Such a risky undertaking is admirable, but the actual execution should have soared on the indelible levels of another Aronofsky masterpiece or something by Terrence Malick. This time, even without studio interference, the cinematic creator has given us a "Waterworld" of biblical proportions.