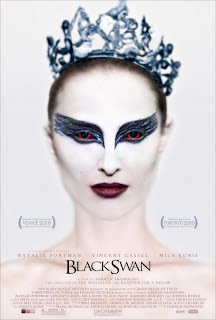 You won't find the Sugar Plum Fairy here, but Darren Aronofsky's backstage performing-arts nightmare "Black Swan" is one mesmerizing, breathlessly intense, and seriously nutso delirium. Mirroring "The Red Shoes" by way of "Suspiria" and "Repulsion," it's a literalization of "Swan Lake," a ballerina's journey of self-criticism and sexual awakening, a psychological horror film with David Cronenberg's bodily undertones, and altogether quite the wild head trip.

The film follows Nina (Natalie Portman), the most obsessively dedicated and talented dancer at a ballet company who lives under the thumb of her doting, invasive stage mother (Barbara Hershey) in a cramped Upper West Side apartment. Even Nina's room is dressed like a little princess's with pink teddy bears and a music box. She strives for perfection in her controlled pliés and regimens, and to be cast as the lead in a stripped-down production of Tchaikovsky's Swan Lake. While the whip-cracking French director Thomas (played with roguish arrogance and sexual ooze by Vincent Cassel) knows Nina will make a flawless White Swan, he thinks she lacks an inner fire for the Black Swan: she's all technique and no feeling. But once Nina snags the Swan Queen part through a little willful seduction with Thomas, Nina soon replaces Beth (a tragic, live-wire Winona Ryder), an aging prima ballerina who's retiring against her will. Overworked and paranoid that free-spirited new dancer Lily (Mila Kunis) is stealing the role from her, Nina gets worked up and loses sight of her sanity. And let the swan metamorphosis and downward spiral begin. 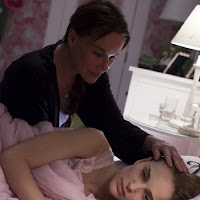 Aronofsky makes ballet hurt like the bloodsport that wrestling was in his last work, "The Wrestler," capturing the acute pressures and discipline of dance inside a psychological nightmare. He shoots the film with a frenetic handheld camera, courtesy of cinematographer Matthew Libatique, bringing a dark menace to dressing rooms, subway platforms, ballet stages, and a symbolism to mirrors everywhere. Intensifying the “what is real and what's not?” bridge even more, the dizzying camera follows and spins around Nina's bunned head. What Nina experiences, we experience, and this includes grotesqueries such as scaley skin rashes and broken fingernails. Portman is amazingly brave, vivid, and devastating as Nina, a physically and mentally demanding close-second to her role in "V for Vendetta," embodying the frigidness, fragility, grace, and virginal innocence of Nina (and the White Swan). She's a real tour de force. The actress, who trained in ballet as a child and practiced hard for a year, graces us as she did most of her own dancing on pointe. Kunis's Angelina Jolie-esque perf is fiery and sexy as Lily, and both she and Portman are fearless and sexually frank in their much-ballyhooed lesbian scene. Hershey is more subtle than you'd think as Nina's mother, caring and cheery but shrewish as her only means of living is through her daughter.

Coupled with Aronofsky's gliding direction are Clint Mansell's operatic fever-dream score, a backward, distorted variation on Tchaikovsky's music, and the stunning production design. The film's bending of reality and fantasy also bends high melodrama with high camp, especially when it comes to some of the digital effects in the transformation scenes, but it's done with such artful, gloriously intoxicating style and passion. Like a wildly effective horror flick, we do get some shock cuts, and Nina keeps seeing a doppelganger of herself in passing or in mirrors. As hypnotic as it is luridly absurd, this whacked-out fairy tale for adults is so alive you can feel Nina's nerve endings and calf muscles cracking. "Black Swan" isn't going to be everyone's cup of tea, especially if your last cup was "Burlesque," but it's a high-pitched whirlwind of beauty, brilliance, and sheer insanity that might leave you shaken, much like Aronofsky's unforgettable "Requiem for a Dream."