Come On Hear the Spooks: "Quiet Ones" more jumpy noise than scary fun 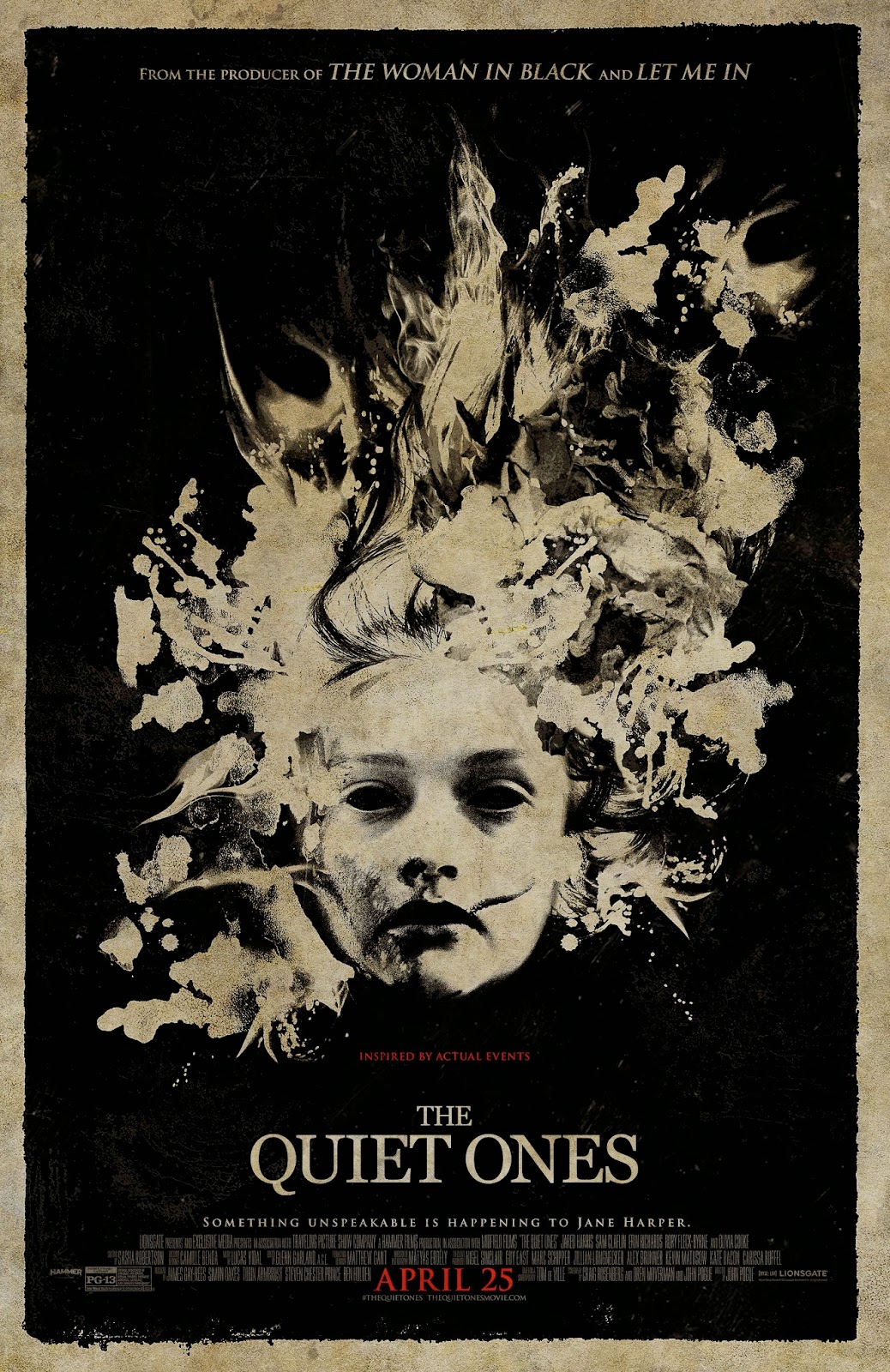 The latest retro-horror pastiche from England's resurgent Hammer Films banner, "The Quiet Ones" is actually a misnomer. Though he holds the blood—or perhaps it was censored to appease the powers that be—director John Pogue  (the scribe of "The Skulls" and "Ghost Ship" who has only helmed 2011's "Quarantine 2: Terminal") seems to know little about gingerly unspooling disquiet and genuine frights without cranking up the loud noise and rapidly shaking the hell out of his camera. It no longer becomes a study in slow-boiling restraint as much as hokey hokum that exchanges tension and chills for frustration. Why did this movie need to fool us into thinking it was "inspired by actual events"? Why did the first draft of such a simple possession story, "based on a screenplay by Tom de Ville," have to be doctored by three writers (Craig Rosenberg, Oren Moverman and director Pogue)? Whatever the reasons, "The Quiet Ones" turns out to be less than worthwhile and manages to commit the cardinal sins of any horror film: it's just not very scary or that much fun.

In 1974, at University of Oxford, paranormal researcher and professor Joseph Coupland (Jared Harris) holds an on-campus experiment with two of his grad students, Harry (Rory Fleck-Byrne) and Krissi (Erin Richards), on a special patient he's studying and hopes to cure. Her name is Jane Harper (Olivia Cooke), a mentally ill foster child who's been passed from family to family and could be possessed by a spirit named "Evie." Hired to shoot the entire experiment is naïve cameraman Brian McNeil (Sam Claflin). When the university funding is pulled by university authorities, Coupland and his team move Jane out to an old mansion on an isolated estate, as one does, and keeps her in a cell-like bedroom. As the experiment gets going, Coupland forces Jane to get "Evie" to manifest the ghost's negative energy into a doll and, faster than you can say "The Exorcist," the quiet ones start screaming.

From its second half and on, "The Quiet Ones" remains mostly set in and around one house in the countryside, and yet it gives into a pace full of stops and starts. For the experiment trials done on Jane, both narrative momentum and a level of dread are interrupted by a lot of wheel-spinning and an increasingly irritating onslaught of cheap jump scares. More than a handful of times, the music will get quiet, or a shot will get steady, and a sudden bang sounds to make both the characters and the audience flinch in a fright. Jane starts to burn during a séance and screams her head off before we cut to the next scene. Jane vomits up a "teleplasm" before we cut to the next scene. An occult marking scars Jane's skin and it's onto the next scene. Sometimes, a scene abruptly transitions to Brian clapping his hands as a film slate. The spooky stuff can still work like a charm—look at 2012's other Hammer-produced effort, "The Woman in Black," which never felt chopped at the knees by its PG-13 rating—but it's as if saying "gotcha" is about all "The Quiet Ones" has to offer.

Apart from the 1970s fashions, the blasting of Slade's glam rock hit "Cum On Feel the Noize," and the main Gothic location, Pogue doesn't re-create the look and feel of Hammer's past efforts so much as he brings the handheld found-footage technique to the '70s period. The footage is shot like scratchy film stock, but so be it. The cast is led by Jared Harris, as the smarmy, smoking-like-a-chimney Professor Coupland, with a face and demeanor perfect for this genre piece that might have been led by Peter Cushing or Christopher Lee back in the day. He somehow even makes the line, "Take your hands out of his trousers now, please," less campy than it sounds. As the skeptical Brian, Sam Claflin ("The Hunger Games: Catching Fire") is rather bland, but Olivia Cooke (TV's "Bates Motel") emits a sad confusion, knowing power, and scared hysterics as supernatural conduit Jane. Though she amounts to fodder, the fetching, fresh-faced Erin Richards lends the most spark as cheeky sexpot Krissi.

Given its pedigree, "The Quiet Ones" does possess a classy atmosphere and enough quality production design, not to mention a nifty sound design that aurally resembles a propeller, to keep it from being a total waste. A scene with a boiling bath is as creepy as it gets. Otherwise, it never feels like there is enough at stake and suddenly Brian needs to start caring about Jane. The film also underutilizes its introduced idea—that the supernatural is nothing more than telekinetic manifestations—and then never goes far enough in any direction, stringing us along to a secret that's been staring the characters in the face, as well as a confused, nothing-special climax. Despite a creepily amusing Lovecraftian ending that's open to "The Quiet Ones: Part II" because good never prevails in the face of evil, the majority of the film is too weak to elicit any serious shivers. One keeps hoping it will go left, but it's content to go right.