Hell on Earth: Nerve-jangling "Sacrament" holds you in its viselike grip 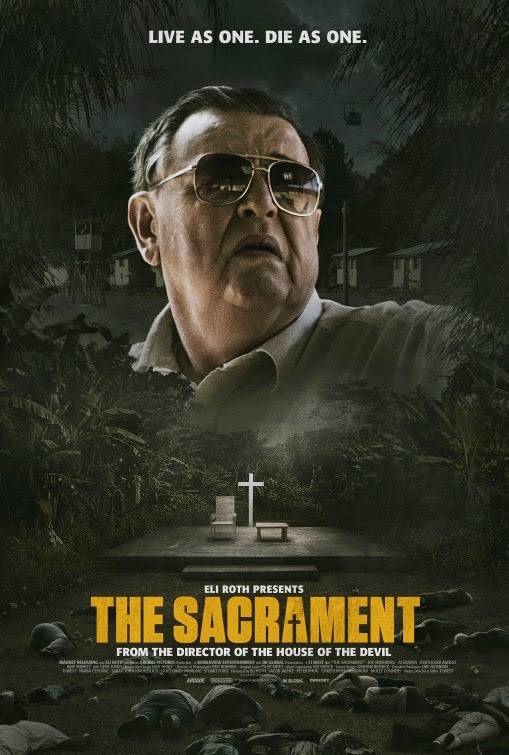 Filmmaker Ti West has already marked himself unbeatable in the horror genre, perhaps even an auteur in certain circles. On to his sixth feature, he has yet to make a misstep that is feature-length and in his control (note the distinction for his perfunctory short in "The ABCs of Death" and the studio-interfered "Cabin Fever 2: Spring Fever"). When West is on, he's on the level of a John Carpenter or Wes Craven, and what's more, he never repeats himself. Whereas "The House of the Devil" was a beautifully crafted homage to '80s horror, as if it could have been made in that era, and "The Innkeepers" a seamless blend of creepy spooks and slacker-comedy laughs, West dips his toes into the world of a cult. Inspired by religious cult leader Jim Jones and 1978's Jonestown Massacre, "The Sacrament" is deeply disquieting and nerve-janglingly sinister, a pseudo-documentary that delves into the scariest corners of religious fanaticism, reaches through you and disturbs you to the core.

New York City-based multimedia company VICE goes out into the field to cover controversial stories. Correspondent Sam Turner (AJ Bowen) and cameraman Jake (Joe Swanberg) turn a personal mission into a new journalistic piece when their friend, concerned freelance photographer Patrick (Kentucker Audley), receives a letter from his estranged sister, Caroline (Amy Seimetz). A former drug addict, Caroline left the city to join a sober-living commune in Mississippi and live off the land. When the trio arrives to the gates of their secluded location guarded by armed men, Caroline meets and welcomes them to "Eden Parish." It's a spiritual, tech-free utopia, full of members who were born outcasts society turned its back on and are now led by Charles Anderson Reed (Gene Jones), known as "Father," a powerful, pacifistic messiah who has given his followers shelter and hope. Caroline seems normal and happy to see her brother and shows Sam and Jake to their own cabin before they start interviewing the members who all see their new residence as "heaven here on Earth." Before the congregation holds a gathering of singing and dancing, Father has agreed through Caroline to be interviewed on-camera by Sam. Eden Parish might look like a hippie paradise, but Sam and Jake suspect it's really a prison, especially when a mute girl and her mother secretly hand the "outsiders" a note asking for help. "If you put your hand at the end of the dog bone," Father tells them, "don't be surprised if you get bit."

Written, directed and edited by Ti West, "The Sacrament" is another example of why horror films are best when independently financed. West is in full control and affords his film with care and craft (and controlled handheld camera work), rewarding patient viewers with his deliberate pacing that is never slow or boring. For the better part of 40 minutes, the film plays like a travelogue documentary, carried out with observation and a tense, "you-are-there" authenticity that prevents the seams from showing. We are pulled into the setting of the tranquil Eden Parish (shot in Savannah, Georgia) and understand why members of the congregation have moved to such a place to better themselves and build a closer relationship with God. They have all helped build the commune from the ground up, complete with a medical center and daycare center, and grow their own food. None of the Parish members behave like garden-variety horror-movie villains; they're friendly and nearly identifiable in how blindly faithful they are to Father. Then, akin to a pot of water coming to a scalding boil, the film's last third is a veritable sucker punch. Father explaining a final mission that involves drinking the Kool-Aid (literally) to his brainwashed followers is unsettling and hyperventilation-worthy, and a final brother-and-sister moment between Patrick and Caroline is disturbing and devastating in the static way it's conveyed.

With horror maven Eli Roth producing (or "presenting") and multi-hyphenates Joe Swanberg and Amy Seimetz in front of the camera, it's like an incestuous circle of friends doing favors for one another and having their hearts in it. AJ Bowen ("You're Next") is a likable audience surrogate as Sam, along with Swanberg as Jake, and Seimetz is quite unnerving as the sweet-faced, initially hospitable Caroline who has given herself to her so-called paradise and its warped ideas of togetherness. Owning the role of the disarming and influential Father, Gene Jones knocks it out of the park with a performance that's absolutely commanding and terrifyingly persuasive. Under Father's cheerful demeanor is the paranoid belief that anyone outside of Eden Parish will destroy what they've made for themselves and spread lies, but Jones downplays such a monster without going big and broad.

Each one of West's films has made an impression, leaving evidence of the filmmaker's fingerprints with his preference for slow-burning dread over cheap thrills. The film is certainly a scary horror film, but it also lends itself to thought-provoking ideas about how people can be conditioned to think in such a contorted way and be persuaded by every belief one man chants. An occasional hindrance here is the use of Tyler Bates' musical score, which is eerily pulsing nevertheless, somewhat detracting from the film's overall immediacy. A living nightmare mounted with simmering, suffocating tension and stomach-dropping intensity, "The Sacrament" would make a chilling double feature with Kevin Smith's "Red State." It is minimalist, all-too-real terror that pulls no punches in its visceral response.