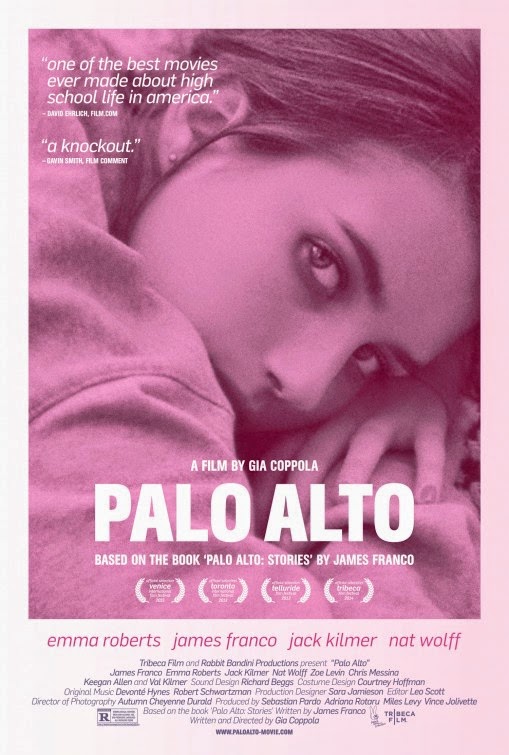 Teenage privilege, listlessness, and angst are all part of a derivative mainstay, but a film of any type needn't reinvent the wheel as long as everything is carried out with a fresh, personal voice and specificity. Truthful, involving, and contemplative, "Palo Alto" is not out to chart new ground when it can carve out its own place in independent teen cinema by the way it's astutely executed. Notably, it features in front of the camera a whole new generation of Hollywoodites, with the likes of Emma Roberts, niece of Julia and daughter of Eric; Jack Kilmer, son of Val (who has a small role here); and Natt Wolff, son of actress Polly Draper. (But no, the game does not extend to Claudia Levy, who is not the daughter of Eugene.) Not to mention, the film happens to be the directing debut of the next of kin in the Coppola filmmaking clan. 27-year-old Gia Coppola, Francis Ford's granddaughter and Sofia and Roman's niece, makes her slice of unguided teen life just distinct enough, and it's clear she gets the Northern California Teen milieu — the smoking, drinking and partying; the confusion; the aimlessness; the experimentation; the yearning to be liked; and the unexplainable but deeply motivated rage.

Adapted by Coppola from a collection of linked short stories, "Palo Alto: Stories," written by James Franco, "Palo Alto" is constructed as a snapshot collage, drifting through the lives of teenage characters, most of them lost and immature and others just wasted potential. High school virgin April (Emma Roberts) seems like "the most likely to succeed" out of her graduating class, and yet her life is far from perfect. Her mother (Jacqui Getty, the director's mom) and stepfather (Val Kilmer) are usually zoned out, but show love in their own ways. April has a crush on her soccer coach, Mr. B. (James Franco), whom she also babysits for, but she also keeps her options open with stoner classmate Teddy (Jack Kilmer). He pals around with scarily irresponsible hell-raiser Fred (Nat Wolff) and might be developing a bit faster than his buddy, but not before Teddy drives home after a party, hitting another car with the driver (Colleen Camp) inside and running. Teddy ends up getting caught and having to do community service at a children's library. Meanwhile, Emily (Zoe Levin), a nice, vulnerable girl who's known for being easy with the boys, begins hooking up with Fred, but he might be the last one she gives favors to after realizing she's better than that.

A tonal companion piece to 2011's authentically untouched "The Myth of the American Sleepover," Gus Van Sant's "Paranoid Park" and Sofia Coppola's own feature debut, "The Virgin Suicides," more than Larry Clark's "Kids," "Palo Alto" reaffirms that the Coppola gene promises the talent to finesse a film with an intuitive eye and ear for visual storytelling through mood and the ability to bring out a naturalism in his or her actors. The piece is not so much plotless or episodic as it's an observant, free-floating tapestry with thematic cohesion. There are small, raw moments moving at a fluid, take-it-all-in pace rather than a pile-up of severe, plot-significant happenstances building to a melodramatic climax. In one telling moment, April gets some history homework help from Mr. B, who tells her that history is about explaining the reasons for why things happened. She opposes, "I do things all the time for no reason," and he responds, "You don't know why you do things, but there's always a reason." Dreamily and evocatively photographed by first-time feature director of photography Autumn Durald with a fly-on-the-wall approach and attention to mise-en-scène, the film has such a gorgeously textured legitimacy that the line between film and documentary becomes immediately blurred.

Were it not for some of their now-recognizable faces and last names, Gia Coppola's perfectly chosen actors could all be taken as real teenagers and not be "playing" at all. With her film resume slowly building, Emma Roberts comes into her own, doing some of her most affecting and sympathetic work so far as April and capturing every identifiably tentative feeling when she's by herself or around Teddy and Mr. B. Whether he's playing himself or an outright natural, Jack Kilmer is impressively unforced in his feature debut. He makes Teddy easily the most affable male on screen, and even with his egregious mistakes, he's going to make it out of his teenage years alive. The same probably can't be said for Fred, played by a chillingly believable Nat Wolff, who's turning out to be a true find. Here, as a wildly reckless and aggressively cruel lost boy who deserves a swift kick in the ass, he gets to act hyper and weasely, yet angry and pathetically sad inside. Finally, in the younger age bracket, Zoe Levin is emotionally exposed and touching as the carnally popular Emily who should thank Fred for giving her the chance to love and respect herself before it's too late. Also, James Franco is effective yet again, never playing the charming but skeevy Mr. B. purely as a predator or even a bad person but as a single father who can't seem to connect with anyone his own age. A counterpoint to Franco's Mr. B, at least in terms of sexual orientation, Chris Messina makes an impression in his one scene as Fred's pot-smoking gay father.

In other hands, "Palo Alto" might have been trite, or vapid, or phony, or condescending—a different film entirely. Much like her Aunt Sofia, writer-director Gia Coppola is not judgmental toward any of her characters, nor does she punish or completely let them off the hook. Instead, she cares about these kids, tries understanding them, and finds no reason to diagnose them in any way, although they all could use some guidance from stronger role models. None of the characters merely exists on the "good" or "bad" side of human morality; they're lost in between. Sometimes, it feels like an extra scene could have been inserted to get us from here to there, but suggestion is a large part of Coppola's smart filmmaking tactics, in which she alludes to certain story points and doesn't always spell out character motivations. In the case of an uncomfortable encounter between April and Mr. B, the director wisely shoots the scene on a couch in an experimental way that rids it of any youthful exploitation and actually evokes a more powerful impact. For a first feature and for a film, period, this is strong stuff. It doesn't have a big, thinly veiled statement to make, but it's poignant, beautifully crafted, and keenly aware of what makes a teenager tick.