The Book of Sandler: Barrymore and Africa make "Blended" bearable 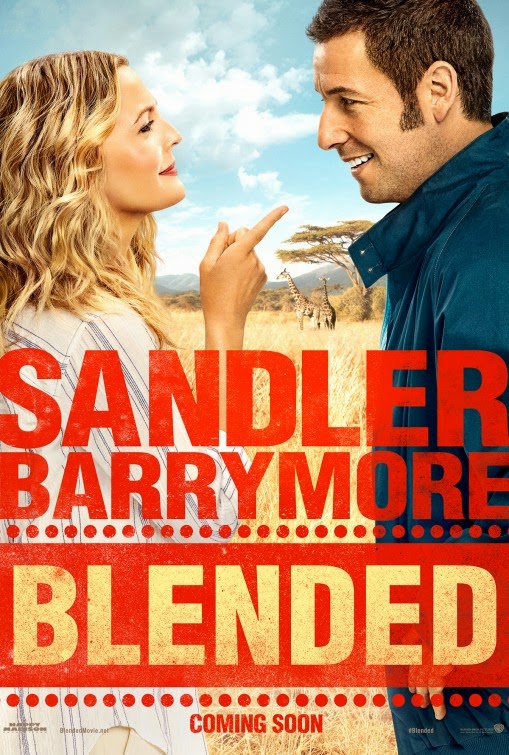 With any new Adam Sandler movie that isn't directed by Paul Thomas Anderson or James L. Brooks, there is a specific level of expectations. Is it going to be a noxious, unfunny experience like watching Sandler on the screen twice in "Jack and Jill"? Or, is it harmless junk food like "Just Go with It"? Do you want to get shot in the eye or hit on the wrist? Compared to the recent wave of Sandler starrers—which are much like the infantile, pandering mass-produced hits his stand-up comedian character, a loose version of Sandler himself, made in "Funny People"—"Blended" turns out to land splat in the middle of those two poles, but his latest does have one thing going for it, and that's the sweet coupling of Sandler and Drew Barrymore. 1998's "The Wedding Singer" still arguably stands as Sandler's best, and with his sunny co-star, it was even better. The two reunited in 2004's "50 First Dates," a nice surprise, and it was a toss-up if it could work again a third time or fall flat. With "Blended" following the law of diminishing returns, its two stars at least make it more palatable than it should be. It's not brain surgery, but it didn't have to feel so lobotomized, either.

It's not quite love at first sight when Jim (Sandler) and Lauren (Barrymore) have a terrible blind date at Hooters (product placement). He's a laid-back Dick's Sporting Goods employee (product placement again) and widower who lost his wife to cancer and raises three daughters all by himself, while dressing them all in track suits and getting their hair cut at his childhood barber. There's his eldest, tomboyish 15-year-old basketball star Hilary (Bella Thorne), whom Dad fist-bumps and calls "Larry" when she just wants to be seen as a girl; the middle daughter, Espn (Emma Furhman), who was named after Dad's favorite network, talks to the spirit of her mother; and the youngest, Lou (Alyvia Alyn Lind), runs around and speaks in cutely demonic voices. Lauren (Barrymore) is a type-A closet organizer (who wouldn't want that job?) and divorced mother of two hyperactive boys. She has to contend with her older son, Brendan (Braxton Beckham), and his centerfold fantasies, and attend the Little League baseball games of the youngest, Tyler (Kyle Red Silverstein), since her ex-husband (Joel McHale) never shows. How else can these two single parents and their families blend into one nuclear family? Well, through a series of coincidences, when Lauren's friend and work partner, Jen (Wendi McLendon-Covey), gives up a paid spring break vacation to Africa with her rich doctor squeeze, who also happens to be Jim's boss (don't ask), Lauren and Jim separately get the idea to take advantage and go to the same resort, which also happens to be holding a "blended family" event. Wackiness, love, and hugs ensue.

Directed by Frank Coraci (who bottled up magic sixteen years with "The Wedding Singer" and hasn't come close to it since), working from a hacky script by Ivan Menchell and Clare Sera, "Blended" is frothy and friendly enough, even when the laughs aren't always there. It seems like a paid vacation through Travelocity to Africa came first before the contrived set-up, which is even more asinine than "Just Go with It," and then sets the stage for many more puerile misunderstandings involving a honeymoon bedroom and a couples massage class. Whereas many of Sandler's comedies want to have their cake and eat it too with crass gross-outs and shoehorned schmaltz, this one is sentimental throughout. None of it is really subtle, but moments of it are sweet nonetheless, as a scene where Lauren tucks in Jim's youngest daughter and sings her "Over the Rainbow" can attest. The plot thread with Jim's deceased wife is actually respectfully handled with some semblance of pathos and never turned into a joke. However, a blending of movies for both families and the Happy Madison demographic seeking Sandler's tomfoolery, plus cameos from certain "The Wedding Singer" and "50 First Dates" side characters, results in something tonally uncertain. The movie is unexpectedly low on bodily fluids, but predictable physical gags have Lauren parachuting during a safari and Jim and Lauren's son bonding over ostrich rides. A punchline to a setup involving fake crocodiles is slack. Nonsensically, an African resort employee looks directly to the camera and says, "You won't find that in New Jersey," at the sight of rhinos humping. Huh? Lauren carrying her son to bed and accidentally hitting his head against the wall is amusing once, but it's used four more times. There are too many lame jokes that perpetuate Sandler's affinity for mocking potshots, in which (1) one of Lauren's sons is called "Frodo" for having a dark, curly head of hair; (2) both of Jim's conspicuously feminine daughters are repeatedly confused for being boys because of their boyish hair cuts; and (3) Lauren and her "Closet Queens" business partner are mistaken for a lesbian couple. There's also the recurring joke about Jim being called "a chubby loser" and "a buffoon," so Sandler does get equal opportunity.

It's made abundantly clear to the viewer that Adam Sandler and Drew Barrymore are comfortable working together, as they end up making the proceedings generally pleasant with their natural chemistry. But would it have killed them to reunite with a funnier, smarter, less flabby, and less lazy script? In playing Jim, Sandler takes a rest from being a fly in the ointment of his own movies by not putting on a dopey, abrasive accent or overplaying his stale man-child shtick again. As Lauren, Barrymore is unfailingly charming in her own right and seems to be able to always bring the best out of her co-star, but it would have been nice to see her working with material that wasn't beneath her normal intelligence. Wendi McLendon-Covey steals her scenes with hilarious delivery as the sassy Jen and must have brought her improv capabilities to the material, as in her list of direct putdowns to a heckling jerk in the stands at Lauren's son's baseball game. Every time infectiously likable newcomer Jessica Lowe pops up on screen and shimmies as the lusty, squeaky-voiced Ginger, the younger new wife to a hotel guest (played by Kevin Nealon), she sends one into a giggle fit. Also, Terry Crews can be a funny, energetic comedian, but here, a little bit of his shtick as the hotel's over-the-top, pectacular frontman for an omnipresent entertainment troupe goes a looong way. The kid actors have pep but mug too much for the camera, particularly Braxton Beckham as Brendan, although Emma Fuhrmann as Espn seems to come from a different, more poignant movie.

If one takes notice of the cinematic offenses Sandler actually had a hand in writing, most of those movies are his worst, but since he always gets a producing credit, he's not off the hook. All in all, "Blended" has a heart and ekes out some rib-tickling moments buried under a lot of juvenile, judgmental stuff. More insulting is that the story, which is already lacking in conflict, had to be inexcusably stretched to three minutes shy of the two-hour mark—seriously, what is wrong with a light comedy getting out at 90 minutes?—as if the filmmakers wanted to keep us guessing how it would end. Eager to be liked, "Blended" is bearable and never as inept, mean-spirited, slapped-together, or abusive as one might expect ("Grown Ups 2" easily earns that badge of honor, no contest). As with most Sandler comedies, it seems like the cast and crew had fun making a movie and getting a paid vacation to South Africa, but if there's a next time, it should be better than "not terrible."