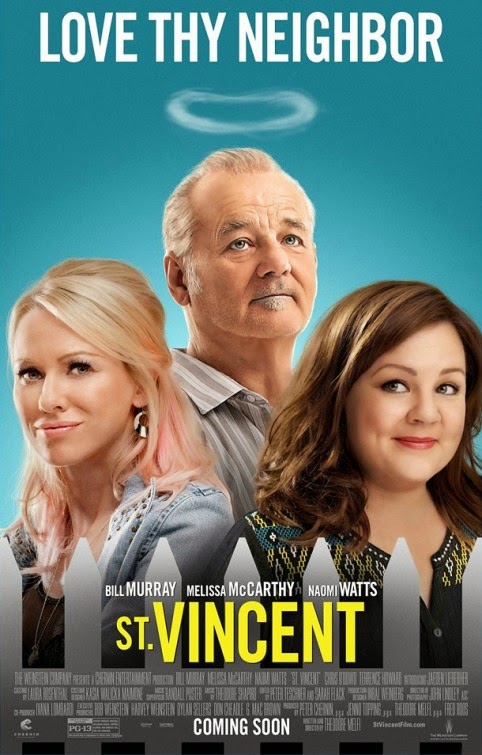 Debuting feature writer-director Theodore Melfi is lucky to have national treasures Bill Murray and Melissa McCarthy, and a natural kid actor, while actually utilizing their talents. Very much "About a Boy" and a milder "Bad Santa," "St. Vincent" is a piece of feel-good sentimentality that might be hokey but resists being intolerably hokey. It's mainly because of the performers, Melfi's nice way with dialogue, and underserved New York shooting locations that this formulaic comfort food manages to be more than palatable and too difficult to resist. We have seen the crusty old neighbor, the precocious kid, and the struggling mom characters before, but these actors give them fresh distinction and make the material better. Just because "St. Vincent" isn't telling the most original story in the world does not prevent it from entertaining. You know where most, if not all, of this is going, but how it gets there is funny and sweet when it could have been just cornball and syrupy.

Bill Murray plays Vincent McKenna, a boozy, chain-smoking, misanthropic war veteran and professional grump who lives with his white Persian cat in a Brooklyn neighborhood. One morning, newly divorced single mother Maggie (Melissa McCarthy) and 12-year-old son Oliver (Jaeden Lieberher) move in next door. Naturally, they don't get off to the best start, as Maggie's movers accidentally take off a tree branch with the moving truck and do some more damage to Vincent's already-beat-up convertible. Working as a CAT Scan tech, Maggie has a stressful work load, on top of her ex wanting joint-custody of Oliver, so with nowhere to turn, she then convinces Vincent to watch her son after private school for a $12/hour fee, of course. Though it's an unorthodox relationship for both Vincent and Oliver, it will probably be good for both of them.

For a film that is pure formula, "St. Vincent" gets the most heart and edge out of Vincent and Oliver's burgeoning bond. When we first meet Vincent, he's the kind of guy who's always in the same local bar and has to be cut off by the bartender. He pays for sleepovers with Daka (Naomi Watts), his favorite Russian "lady of the night" who also happens to be pregnant. Vincent has a gambling problem, too, and is up to his eyeballs in debt owed to a bookie (Terrence Howard). As Vincent takes on Oliver as his charge, his inappropriate idea of babysitting involves serving up "sushi" (read: cans of sardines and crackers) for dinner, teaching him how to fight, and taking him to the race track and a bar. He might be a curmudgeon, but there is a sad loneliness and a marshmallowy kindness beyond Vincent's hardened exterior, especially once he takes Oliver to visit his Alzheimer's-afflicted wife Sandy (a poignant Donna Mitchell). Before learning from Vincent how to break someone's nose, Oliver is still a smart, resourceful young boy—he knows how to use GPS when hopping on a bus to get to school.

The characters are all written with sympathy and affection, but it's the performers who bring something extra special. Prickly, funny, generous, lived-in and heartbreaking in equal measure, the famously elusive Murray is perfectly cast as Vincent, a role he could perform in his sleep, but he never seems to be sleepwalking through it. Set in his ways, Vincent never magically transforms into a totally cleaned-up sweetheart even once Oliver names him a one of the "Saints Among Us" for a school assignment, and Murray still dares us not to like him. 11-year-old newcomer Jaeden Lieberher is engaging and instantly likable as Oliver. This runt-sized discovery never forces on the cuteness; he's just that natural. Proving she's not a one-trick pony, Melissa McCarthy shines in a change-of-pace straight role where she's not playing a brash wild-card, punching someone or volleying ad-libbed insults. Her terrific work as Maggie, a desperate single mom with a loaded plate, always rings touchingly true. The only semi-hinky acting contribution is Naomi Watts. As pregnant Russian stripper/hooker-with-a-heart-of-gold, Watts is surprisingly irresistible, noticeably having fun playing up the accent and baby bump in shorty shorts, but not always believable. That she's pregnant and still working the pole might be too broadly cartoonish for its own good. In smaller roles, Chris O'Dowd is also appealingly irreverent as Oliver's compassionate Catholic teacher Brother Geraghty, and Kimberly Quinn is kindheartedness incarnate as Sunnyside Facility nurse Ana.

It might be nitpicking, but "St. Vincent" falls into a few contrivances. It's a little fuzzy why Maggie enrolls Oliver in private school if she says it's so expensive, and he even tells Brother Geraghty, "I think I might be Jewish." Conflicts have pat resolutions, like Oliver and the school bully (Dario Barosso) becoming close friends. And, like in "About a Boy," the film culminates in a presentation held in the school auditorium. Here, credulity is strained a bit as every nice character is in attendance to hear what Oliver wrote, but the manipulation of it all might even work on and put a lump in the throat of the overly cynical or stone-hearted. What one will find nice and heartwarming, another will find forced and cloying, but "St. Vincent" is the definition of a perfectly pleasant crowd-pleaser done well.