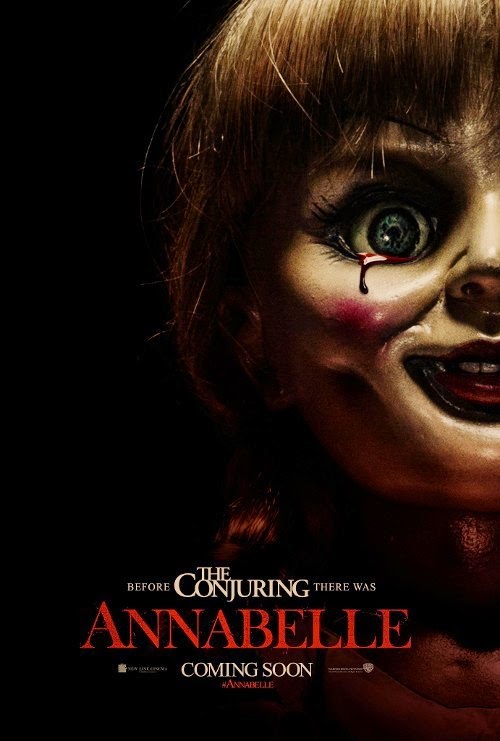 2013's "The Conjuring" was a damn good horror film, fearsome and classily orchestrated, authentically decked out in 1970s production design and autumnal atmosphere, and further supported by terrific actors. Anyone that made it to the end of that film's chilling prologue will remember Annabelle, the freaky porcelain doll with a face only Chucky could love. Without wasting any time, it was a no-brainer that this possessed porcelain nightmare deserved her own rightful origin story. And, here it is with "Annabelle," an equally effective and disappointing companion piece to James Wan's "The Conjuring" that shares pieces of that superior spine-tingler's sense of dread but delivers the kind of throwaway scares that work in the moment and then don't really stick beyond the theater. Financially, it will put butts in seats and scare the popcorn out of audiences' bags, but when "Annabelle" lets out, one is still ready for a few more drops and loops than this ride is willing to go.

In 1967, a year before Annabelle found her way into the hands of two nursing roommates and then became one of the haunted artifacts encased in glass in the special occult room of paranormal investigators Ed and Lorraine Warren's home, the doll was a gift to pregnant mother Mia (Annabelle Wallis). Living in a Santa Monica bungalow with medical student husband John (Ward Horton), who's about to start his residency, Mia happily awaits their baby girl's arrival by decorating the nursery and adding the vintage doll to her collection. That same night, Mia is awoken by a scream next door at the Higgins' house. As John investigates, Mia is attacked by the neighbors' runaway daughter, Annabelle, and her boyfriend who are Satanic cultists. While our happy couple survives, the police take out the boyfriend, while Annabelle takes her own life with the doll in her arms. After such trauma, Mia stays home on bed rest and then insists John throw away the doll. He does, but an unexplained fire causes the couple to move to a Pasadena apartment closer to John's hospital and the doll turns back up in a moving box. Unbeknownst to Mia and John, Annabelle has attached her soul into the doll as a conduit and something wicked this way comes once Mia gives birth to Leah. Perhaps friendly tenant Evelyn (Alfre Woodard) and Father Perez (Tony Amendola) can fill in the blanks for the couple.

With instances of being in the same class as "The Conjuring" but ultimately not holding a candle to it, "Annabelle" is more of a near-miss on the level of James Wan's fun, albeit increasingly dumb, 2007 ventriloquist's-dummy spooker "Dead Silence." Wan's fingerprints are still all over it, even though he steps this one out and lets his director of photography on "The Conjuring" and the "Insidious" movies step up to the plate. What director John R. Leonetti (1997's "Mortal Kombat: Annihilation") and screenwriter Gary Dauberman get right is understanding the horror genre, favoring build-up over flash cuts (though there is one) and old-fashioned suggestion over explicit violence, and the disturbing idea of dolls being childlike toys that could be hosts for evil. For Annabelle's big feature close-up, it's a relief the filmmakers don't take the "Child's Play" route (though notice a sign for "Barclay Hotel"), having the doll run around and go on a murderous rampage. Otherwise, after the setup, this is actually an origin story for another demon, a sooty, ram-like demon that's even quite similar in its design and framing to the "Lipstick-Faced Demon" in "Insidious" and yet still scary on its own.

Without serving as his own cinematographer, Leonetti sets a slow, measured pace, not far removed from how Wan slowly warms up his machine of dread and then properly times when to pounce on his audience. He never misses an opportunity to shoot Annabelle sitting on her shelf, or rocking in a chair, and staring with her dead, occasionally bloodshot eyes. Unfortunately, on a few occasions, Leonetti is unable to resist employing a few screechy musical stings from a ten-person orchestra or holding a shot longer than usual with a payoff that always gives us the opposite of what we're expecting. Making up for those standard tactics are some sufficiently creepy frights, including a bloody nick from a sewing machine and a wide shot that leaves room for peripheral activity to go on as Mia and Leah both take naps. Most unnerving of all, there is a sequence where Mia has a run-in with a sinister baby carriage in her apartment building's basement and then gets to safety in a pesky elevator that won't go to any other floor. This set-piece playfully puts the viewer on edge the most with an emphasis on a demonic sight at the bottom of a shadowy stairwell.

If the horror genre ever needed a wholesomely likable couple to bring down a few notches with horrible supernatural goings-on, Mia and John would surely be nominated. Annabelle Wallis and Ward Horton might be most memorable for the coincidence of their first names, the former for obvious reasons and the latter for being as clean-cut and conventional as Ward Cleaver, and the characters' names are right after Mia Farrow and John Cassavetes in "Rosemary's Baby." Outside of that, Wallis is warmly inviting with a strength and intelligence behind the eyes as Mia, while the handsome Horton fares just fine before getting stuck in the Oblivious, Disbelieving Husband role. A few more personality traits and life interests in Mia and John might have made them more interesting—he's studying to be a doctor and she sews a lot—but they serve their purpose. As kindly tenant and bookstore owner Evelyn, Alfre Woodard is far more than a convenient plot device/"magical negro" figure—or at least creates the illusion that she is—with her class, maternal warmth and belief in the material. As a mother who used to feel guilty for her late daughter's death in a car accident, Evelyn and her past are nicely woven into Mia's own arc of self-sacrifice, too.

Audiences who are quick to ridicule character behavior in horror movies should keep in mind of "Annabelle" being set during innocent times, where one wouldn't fault John for leaving the doors to his suburban home unlocked, so suspension of disbelief is given some leeway. Same goes for how a cavalier Mia keeps setting Annabelle back on the shelf with her other dolls, though why anyone would ever want to add such a hideous doll to her collection in the baby's room is beyond a normal thinking person. More lingering questions regard cul-de-sac setups with a noisy upstairs apartment and two crayon-coloring kids in the hallway. To the filmmakers' credit, though, the film never stops being about Mia and her struggle to protect her baby, often tipping into "Rosemary's Baby" territory. There is also an unsettling reference to the Charles Manson murders, established through the news on an old television set, that sets up the tensely staged home-invasion sequence. In the end, "Annabelle" cannot be denied the handful of jolts it plants, but one still gets the nagging suspicion that even the rosy-cheeked, pigtailed star will see more than a few missed opportunities in her own vehicle.