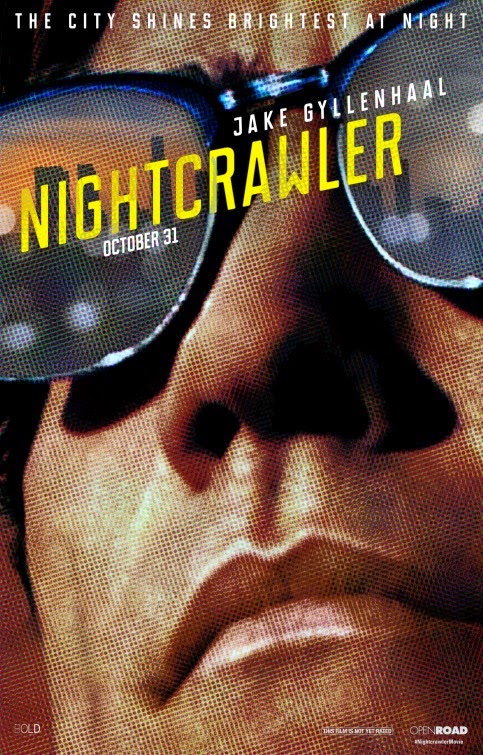 It is primitive human nature to be fascinated by something we shouldn't be seeing. Have you ever rubbernecked while driving past an auto accident? Ever watch the news and wanted to know more about a specific story? Or, have you wondered how grisly footage on the news is obtained? Everyone has been curious enough, despite the morality of respecting others' misfortunes, and if you say you haven't, you are probably lying. That compulsion is pushed to sick heights in "Nightcrawler," screenwriter Dan Gilroy's directorial debut, and comes to life in the form of Jake Gyllenhaal's strange, depraved, scarily committed performance. The film profits as a fascinating, disturbing character piece of an interestingly repellent creep who, from his twisted point-of-view, sees himself as a "hero" and makes no apologies. The lack of ethics in the dog-eat-dog business of local news is less startling than how good this "hero" is at his job.

This gets said a lot about actors, but Jake Gyllenhaal is definitely one of the most consistently dedicated and offbeat actors working today, willing to push himself into dark, challenging roles and make sure that we don't forget about him. Looking gaunt, wiry and unblinkingly wired with greasy hair that often slicks back into a ponytail, a thirty-pounds-lighter Gyllenhaal is tremendously chilling and fascinating as Louis Bloom, an oddball, pathetic petty thief of manhole covers and wire fences who decides to keep his options open, career-wise, in Los Angeles. When he pulls over to the side of the expressway for a couple of police officers rescuing a woman out of a burning vehicle, Lou watches a couple of "nightcrawlers" pull up to the accident, camera-ready and shooting it for all it's worth. "If it bleeds, it leads," one of the ambulance chasers (Bill Paxton) drops to Lou as his mantra.

Proclaiming to be a freelance crime-scene videographer, Lou quickly invests in a dinky digital camera and a police scanner. When he gets his first piece of footage by burrowing his way right into the bloody aftermath of a fatal carjacking, he takes it to local morning news station KWLA News and sparks the interest of ratings-starved producer Nina Romina (Rene Russo). After Lou collects his check, Nina tells him what they're looking for — graphic crimes with white, well-off victims. The thing about Lou is that he learns fast, speaking to everyone like an encyclopedia robot, and picks up on the cutthroat business, taking on homeless twentysomething Rick (Riz Ahmed) as an intern to prowl around L.A. during the vampire shift and soon piling up the checks as he seeks out each crime story. Another thing about Lou is that he will do anything to get the footage—and be the first to get it—and make the most sensationalistic story.

Written and directed by Dan Gilroy, "Nightcrawler" fits Louis Bloom into this incisive, appallingly dead-on indictment of the bottom-feeding local news. There are creeps like Lou who probably do exist. He plays mind games with anyone to get what he wants and breaks the law, whether that's going beyond the yellow tape and manipulating a crime scene to get a great shot or withholding information from a stone-faced detective (Michael Hyatt), and just aspiring to live his own distorted version of the American Dream. Jake Gyllenhaal is simply spectacular, conveying so much to a soulless, unethical character who is hard to pin down. Lou is delusional, opportunistic and sociopathic, intensely self-sufficient and slick in his own way but not socially competent, and even as he makes your skin crawl, your nervous giggle is in his power. After being wasted playing another TV producer in that forgettable 2002 Robert De Niro-Eddie Murphy vehicle "Showtime," taking a six-year hiatus from acting, and then playing Thor's mother in two "Thor" movies, Rene Russo (wife to Gilroy) is back and on fire in her juiciest role to date as Nina. She is terrific, essaying an intelligent woman so desperate for ratings (she describes the spirit of their newscast as "a screaming woman running down the street with her throat cut") and then loses most of her power once Lou comes into the picture. The handling of her character could have easily gone out of the realm of believability when Lou tries coercing her to do something his way, but it does not; her final line about Lou being an "inspiration" works because of its heightened satirical bent, not too different from "Taxi Driver." Though he's mostly along for the ride with us, British rap artist Riz Ahmed is likable and the film's only moral conscience as Rick.

The film is just sleazy enough without becoming exploitative somehow, even as it chronicles a supremely sleazy, exploitative line of work that we've never seen so centrally depicted on screen before. Although it's certainly a horror film in the non-traditional sense, "Nightcrawler" also makes for a dynamic thriller. From Lou entering a mansion in Grenada Hills after a supposed home invasion before the police even arrive, to a stakeout outside a Mexican restaurant that dovetails into an exhilarating car chase, these tense set-pieces hold the viewer and keep them completely edgy. Sturdily paced with brother John Gilroy's editing and crisply lensed by director of photographer Robert Elswit (Gyllenhaal's godfather who won as Oscar for his gorgeous work on 2007's "There Will Be Blood"), the film offers an alluringly sleek, mood-drenched noir version of Los Angeles, a place that makes crime statistics seem wholly possible. Another crime is always just moments away from happening and Lou has the scoop. Like a horrible, fatal accident you cannot turn away from, the film has such a power over the viewer, but it is a lot more than that. It is forceful filmmaking that shines a light on a nocturnal underworld of oily videographers who go to great lengths to complete their risky, morally sticky line of work. Disconcerting, unnerving, and darkly humorous, "Nightcrawler" unsettles and wriggles under your skin, and it's your best bet for a ghoulish last day of October at the movies.