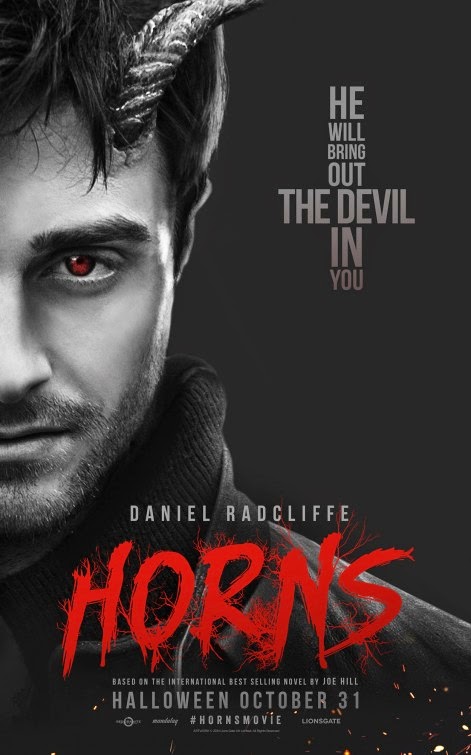 Based on the 2010 book by Joe Hill (Stephen King's son), "Horns" could have easily been turned into a piece of muddled schlock not to be believed for a second. And yet, with the confident direction of Alexandre Aja (who can be grim and horrific, as shown in 2005's "High Tension" and 2006's remake of "The Hills Have Eyes," and then have tons of bloody fun with 2010's "Piranha 3D") and Keith Bunin's often witty, surprisingly thoughtful script, it turns out to be a wildly inventive genre stew. A tonally unusual free-for-all spanning horror, fantasy, black comedy, murder mystery, and relationship drama, "Horns" doesn't always jibe, but there's an excitingly weird kick to watching all of these disparate elements being stuffed together into one devilish pot.

26-year-old Ignatius "Ig" Perrish (Daniel Radcliffe) has been deep in love with girlfriend Merrin Williams (Juno Temple) since they were kids. That is before she was killed and the citizens of their Seattle logging hometown named him the killer, particularly Merrin's grieving father Dale (David Morse). His junkie older brother, Terry (Joe Anderson), and loyal friend Lee (Max Minghella) have his back, while his parents (James Remar, Kathleen Quinlan) voice their doubts. After he drowns his sorrows and sleeps with bartender Glenna (Kelli Garner), who's held a touch for him since childhood, Ig wakes up the next morning to sprouting horns out of his temples. Next thing he knows, everyone around him starts confessing the cutting truth and asking for his permission — Glenna asks if she can stuff her face with an entire box of donuts, a doctor's office receptionist asks if she can flip out at an annoying child in the waiting room, etc. Aside from one person, everyone can see his horns, and then a horde of serpents starts slithering in Ig's direction as if he is the Devil himself. Is the horned town pariah a sinner or a saint?

In a peculiar beast like "Horns," a half-tragic, half-surreal story about love, loss and forgiveness competes with a rather comic tone. At the heart of this fable, Ig and Merrin share a longtime friendship and a mutual love. What we begin to realize is that Merrin, before she is killed, was beginning to have second thoughts, and it's in her maturity that this on-screen relationship is nothing like another "Twilight" love triangle (yes, there is another party pining after Merrin all this time). The whodunit surrounding Merrin's death almost comes as a sidebar since it's not really a shock who has killed her, but at least it's satisfying in how it never feels like the murderer was just selected out of a hat. Even with all of the satanic symbolism and relationship dynamics, there is a lot of fun in Ig having control of others, like when he makes a crowd of media journalists punch each other in order to get their exclusive on him. Other truth-telling secrets are even rueful and taken seriously: Ig's mom wishes her son would just go away, so she and his father could live in peace.

Determined to not be defined by Harry Potter (and the sight of the horned actor drinking, smoking, having sex, and then wielding a pitchfork and a snake hanging around his neck like a scarf should make sure of that), Daniel Radcliffe (2014's "What If") tackles the role of Ig with relish and pulls it off. The character isn't outright appealing, so it's not an easy feat when we still root for him to survive his loss and defeat Merrin's killer. The sweetly offbeat Juno Temple runs deep in her flashback scenes, making sure that Merrin's very grim death hangs over the proceedings. The extent of the ensemble is impressive, with David Morse making a lasting mark as Merrin's devastated father, but Heather Graham is strangely campy as a waitress/aspiring actress who witnesses Ig and Merrin's final couple spat go down and then viciously gets her just desserts.

Through many of the convoluted plot machinations, the film gets darker and darker, until arriving at an over-the-top, everything-but-the-kitchen-sink finale at the scene of Merrin's murder. In a deliciously grotesque touch, the real killer meets his maker with one of Ig's hissing protectors. The special effects of Ig's serpent friends aren't bad, and luckily, many look like the real thing. A forced drug overdose is made vividly frightening and hallucinogenic, with cigarettes turning into maggots and a carpeted floor transforming into a grave in the ground. The production looks great, namely in the "Stand by Me"-esque flashbacks of Ig completing a dare by his friends in their Pacific Northwest logging town; the use of David Bowie's "Heroes" and The Pixies' "Where's My Mind?" are evocative; and Frederick Elmes' (2009's "Brothers") lush cinematography lends a helpful hand to the majestic, moss-covered Edenic forest where Ig and Merrin find a secret treehouse. Though "Horns" isn't perfect or always polished in its storytelling, there is a wickedly entertaining Grimm Brothers-like beauty and underlying heart to all of the horror.