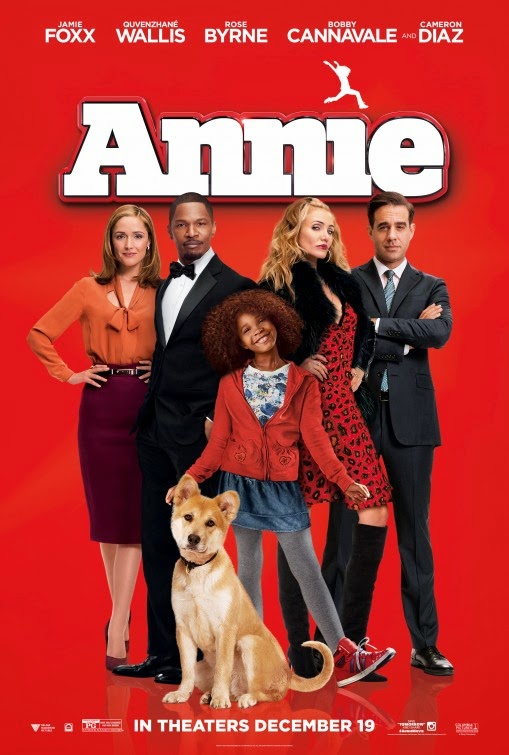 Anyone can bet his or her bottom dollar that everyone already knows "Annie." Whether it be Harold Gray's Great Depression-era comic strip "Little Orphan Annie," Broadway's original 1977 production with Andrea McArdle and later Sarah Jessica Parker, its revivals, the 1982 film adaptation, 1999's Rob Marshall-directed TV movie, or just the sight of a curly, red-headed orphan, you can probably recite every lyric from "Tomorrow" and "It's a Hard Knock Life." There's nothing wrong with updating the enduring rags-to-riches story in musical theatre for a new generation, and the 2014 "Annie" surely does that, changing the race of a few key characters, modernizing recognizable songs and adding a few originals, and incorporating Facebook and Twitter. Looks can be deceiving, like the advertising campaign making this 21st-century face-lift look like a plasticized, faux-hip embarrassment, but the Will Smith/Jada Pinkett Smith/Jay Z-produced "Annie" is, shockingly, a peppy, cheerfully entertaining diversion.

Against all expectations and preconceived notions, the first scene is pretty clever, opening with a school classroom where the "Annie A." we all know—curly, red hair and all—is in front of the class for a presentation on President Franklin D. Roosevelt, but then our attention is turned to "Annie B." 10-year-old Annie Bennett (Quvenzhané Wallis) is a spunky foster child living with four other girls in a Harlem brownstone, under the boarding "care" of Colleen Hannigan (Cameron Diaz), a belligerent, always-sloshed has-been music star booted out of C+C Music Factory. She still has half of the locket from her biological parents, but the only evidence Annie has of them is a letter written on a check from a restaurant, which she visits every Friday. One afternoon, as Annie goes running after a couple of bullies chasing a dog, she's nearly hit by an oncoming van but saved by germaphobic cell-phone magnet Will Stacks (Jamie Foxx). Running for the mayoral race, Stacks is encouraged by political adviser Guy (Bobby Cannavale) and personal assistant Grace (Rose Byrne) to invite Annie to his home when his heroic rescue goes viral. To help his approval rating, he gets plenty of photo opportunities with Annie, who ends up moving into his luxurious penthouse. Is there an organic bond between Stacks and Annie, or will it be just another calculated political move?

Directed by Will Gluck (he of 2010's delightfully sharp-witted high-school comedy "Easy A" and 2011's surprisingly snappy romantic comedy "Friends with Benefits") from a screenplay he co-wrote with Aline Brosh McKenna (2011's "I Don't Know How She Does It"), "Annie" might be a clumsy musical, à la 2008's "Mamma Mia!," but that might be one of the reasons it's so disarming. The songs have certainly been glossed-up and contemporized with a hip-hop beat by composer Greg Kurstin, albeit without sounding like overly tacky or pandering covers by Kidz Bop, but they aren't any less catchy. If one hopes to hear "You're Never Fully Dressed Without a Smile," no one performs it, but there is a poppy arrangement by Sia over the soundtrack. The staging and choreography are even cheesy, but they're also unabashedly brassy and appealingly basic. Chore anthem "It's the Hard Knock Life" is the first real splashy, toe-tapping musical number, performed by Annie and the four other girls with "Stomp"-style choreography involving brooms, mops, and plate juggling. "I Think I'm Gonna Like It Here," performed by Wallis' Annie, Byrne's Grace, and Russian family services worker Mrs. Kovacevic (Stephanie Kurtzuba) during Annie's tour of Stacks' smart penthouse, is a bouncy, irresistible standout with a show-stopping energy.

If Quvenzhané Wallis astounded in her first lead role in 2012's "Beasts of the Southern Wild" at just age six without any acting training and then earned herself an Oscar nomination, the peanut-sized 11-year-old star is precociously cute and gives every song and dance her competent all. Had her breakout role not already come early, Wallis would just be seen as a generic moppet based on her work as Annie, who wins our hearts when she's not directed to pour on the cutesiness less than naturally. As Will Stacks, a version of Daddy Warbucks, Jamie Foxx is the most accomplished voice talent, leading intimate original song "The City's Yours" during a helicopter ride over Manhattan with Annie. While he gets saddled with a mashed-potato spit take, he does sell some of the better comedic moments. His arc from driven, lonely politician to a warm-and-fuzzy family man actually feels genuine, too.

Taking on the role of Miss Hannigan, Cameron Diaz isn't so much miscast—the "Bad Teacher" star is capable of playing mean—as she is just super broad and strident. Carol Burnett certainly did it better, and despite the occasionally funny delivery of a line, Diaz's performance too frequently feels like a hammy put-on of a cartoon who lives to whip open the girls' bedroom door and bark at them with insults and demands. Even if Diaz doesn't always pull it off, as if director Gluck kept pushing for a mugging, preening acting style rather than reeling her in, it is fun to watch Diaz gamely lap up her playfully choreographed rendition of "Little Girls." Once the actress is allotted time to calm down, Miss Hannigan also gets reconfigured with a decent, vulnerable side. Finally, of note, Rose Byrne is becoming such a world treasure, an adorable delight here as Mr. Stacks' workaholic assistant Grace; and even when sharing only a couple of scenes with her notable co-stars, Stephanie Kurtzuba (2013's "The Wolf of Wall Street") is a priceless scene-stealer as excitable Russian family services worker Mrs. Kovacevic. Otherwise, the other four foster kids make little impression, and Bobby Cannavale tries as hard as Diaz, especially during their inferior duet of "Easy Street."

There's something enjoyable about watching actors who aren't ordinarily one's first choice to warble a recognizable song. Of course, "Annie" wouldn't be "Annie" without a heart, and there is a sweetness between Annie and the adults, particularly Grace, who, natch, becomes a mother figure. There are also drops of self-referential winking about product placement and Miss Hannigan handling a casting call to play Annie's parents. One of the film's most absurdly funny jokes has nothing to do with the story proper: Stacks invites Annie and her friends to a movie premiere of a hilariously bad fake fantasy-romance, "MoonQuake Lake," starring Ashton Kutcher, Mila Kunis and Rihanna. On the downside, the golden-retriever-chow mix playing the beloved Sandy—she is named after the hurricane (!)—gets curt treatment, disappearing all too often, and an easily excisable subplot about a would-be romance between Miss Hannigan and bodega clerk Lou (David Zayas) didn't really need to be here to soften the harridan. Nevertheless, with its almost-synthetic but eager-to-please charm, "Annie" is sunny, jubilant cotton candy with more than enough painless entertainment value to go around. It might get a hard knock for not always working, but it doesn't deserve hate mail when you won't leave the theater without a smile.