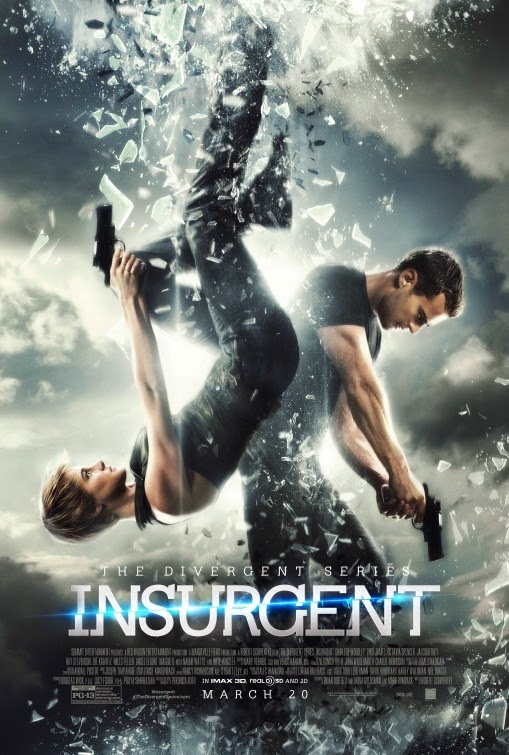 2014's solidly engaging dystopian sci-fi adventure "Divergent," the first screen adaptation in Veronica Roth's literary series, was another bid to get in on the pre-sold, sequel-ready YA franchise bandwagon. It prepped for more to come but, in its own right, also explored a few cool ideas about conformity and individualism, and had a stalwart center in Shailene Woodley whose free-thinking heroine didn't need a man but received one anyway. Quickly produced second entry "Insurgent" is definitely the middle installment, meaning it doesn't tell a complete story, pads most of its first two acts with been-there-done-that filler, and seems to be more concerned with its long-term goals, like what will happen in the next film. It's almost puzzling that everything adventurous—and, yes, divergent—about this film is saved for the endgame, including the final shot that literally ends with a bang and teases one to want to see more.

Peace was seemingly attained with the social order of post-war Chicago's five factions. Set three days after "Divergent," the film catches up with Beatrice "Tris" Prior (Shailene Woodley) and former trainer-cum-boyfriend Four (Theo James), along with smart-ass former Dauntless trainee Peter (Miles Teller) and Tris' sibling Caleb (Ansel Elgort), as they are off the grid and hiding out in the Amity faction. Tris and Four have been named fugitives for crimes they did not commit, and though Tris had to kill one of her own when her life was at stake and her parents' lives were both taken, guilt is still riding heavy on her conscience when she sleeps. It's not too long before the four of them are pursued by Dauntless leader Eric (Jai Courtney), resembling the T-1000 and working under the orders of Jeanine (Kate Winslet), who wants the two Divergents brought to justice. Back at Erudite, the flinty Jeanine is testing Divergents in fatal simulations and hopes to destroy the rest of the Divergents with a mysterious box, which has been left by the founders and can only be opened by Divergents themselves. Furious at the status quo, Tris will never stop until Jeanine is dead.

As is usually expected with a franchise down the line, a different director and writing team march in for part two. Taking over for the predecessor's helmer Neil Burger and two screenwriters, director Robert Schwentke (2013's "R.I.P.D.") and screenwriters Brian Duffield, Akiva Goldsman (2014's "Winter's Tale") and Mark Bomback (2014's "Dawn of the Planet of the Apes") must be doing do yeoman's work because, based on what's on the screen, author Veronica Roth's novel is mostly a rehash of the first. With most of the world-building introductions out of the way, "Insurgent" hits the ground running, rising in stakes and danger, but still suffers a bit from "trilogy-itis." Technically speaking, Tris is back in the same place she was, on the run and out to kill Jeanine, as is Jeanine in her "peace-keeping" schemes. As far as the plot goes, it sprints in place for a while, mapping itself from Point A to Point B: there's downtime in the peaceful sanctuary of Amity, a chase from Amity through the woods to a cargo train, a scuffle on the train with a "factionless" gang, and then more downtime in the Factionless safe zone and the Candor headquarters. It's not until the last half that the narrative actually gains traction when Tris sacrifices herself and any new secrets come to light.

The ever-terrific Shailene Woodley held the first film together with her likable, self-possessed quality as Tris, and she does it again here, while sporting a new pixie cut (which she rather impressively cuts herself early on as if she was a beautician when living in Abnegation). Being the star, she's never truly in any real grave danger, even as bullets whiz directly at her but seem to miss, but the actress sells the heroine's gun-toting toughness and athleticism even more so here. There is also a poignancy to Tris' internal regret, particularly during a trial in front of the entire Candor faction when injected with a truth serum that forces her to confess the deaths that haunt her. Once more, Theo James cements himself as more than just a hunky, brooding love interest needed to rescue his partner; only a bit more history is learned about him when his thought-dead mother enters the picture, but the heat he conjured up with Woodley is still very much there. It's kind of amusing to see Woodley joined even more at the hip by her two previous romantic partners, Miles Teller from "The Spectacular Now" and Ansel Elgort from "The Fault in Our Stars," playing Tris' turncoat competitor Peter and her physically weak brother Caleb, respectively. Teller, particularly, expectedly walks away with the film's best quips. As main antagonist Jeanine Matthews, Kate Winslet is in icy, lifeless form again, but her role is even more restrictive here, forcing the actress to stand in front of hologram screens and play on her iPad to control simulation tests. Finally, Naomi Watts and Octavia Spencer bring a little emotional heft if nothing else to their supporting roles of Amity leader Johanna and Factionless leader Evelyn, which amount to throwaway parts that don't ask much from these actresses.

As a passable entertainment that's capably directed but mechanical, "Insurgent" mostly does the trick, being involving and pacey enough to sustain itself, but it's still a take-it-or-leave-it affair. With the film itself being propulsive in pace but not so much in story, it's made even more clear this time around that Shailene Woodley is better than the film surrounding her and makes the proceedings that much more watchable. Some of the visual effects this time deliberately look like a stylized, dream-like video game when Tris goes through virtual-reality levels of Jeanine's sims (for example, Tris has to save her mother, cameoed by Ashley Judd, in a burning house that floats high above the ruins of Chicago like in Disney's "Up," minus the balloons). They're overly busy and calculated in their choreography, but the aforementioned set-piece is still quite arresting to watch. By and large, the "Divergent" series still leaves room for improvement. If that improvement comes, we shall find out when "Allegiant" is inevitably split into two. Such is the status quo of YA-targeted franchises.