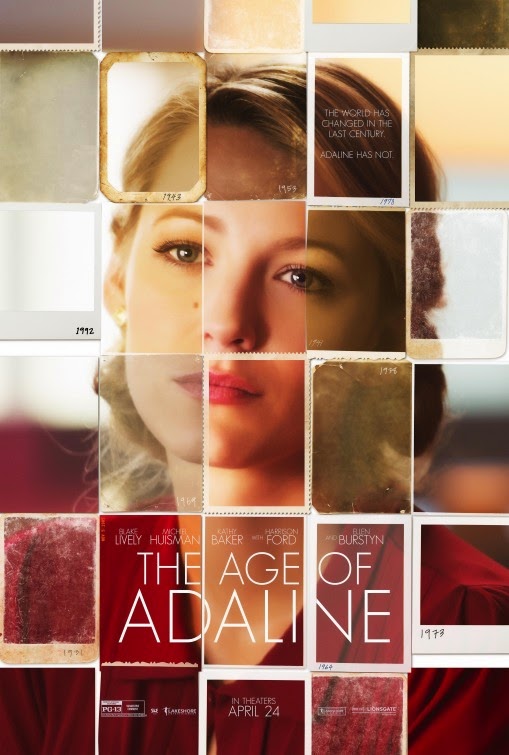 Living forever can get lonely. How do you live without becoming a pariah? How do you fall in love with someone if you remain young and your partner grows old? An ageless, period-trotting love story made from a fantastical premise, "The Age of Adaline" had the potential to be something special and even more ruminative with its themes of mortality and loneliness. Even when the film's love story that matters is curiously given short shrift, director Lee Toland Krieger (he of two uncelebrated indie gems, 2009's "The Vicious Kind" and 2012's "Celeste and Jesse Forever") and screenwriters J. Mills Goodloe (2014's "The Best of Me") & Salvador Paskowitz do a well-enough job of spinning a frequently enchanting and ultimately bittersweet journey that resists the gooiest and most melodramatic turns in any Nicholas Sparks romance. Though the titular Adaline might not share an ending like anyone who is human, the film invites enough merit to be something of a companion piece to 2009's sweeping, achingly profound "The Curious Case of Benjamin Button."

Born the first baby of the New Year in San Francisco in 1908, Adaline Bowman (Blake Lively) is now 107 years old but looks 29—and might always look 29. From a helpful narrator (Hugh Ross), we are informed that Adaline, in 1937, was involved in a car accident that, due to hypothermia that stopped her heart and a lightning strike that defibrillated her back to life, gave her the gift of eternal youth. As the years passed, people started to notice she did not look her age, so Adaline was forced to go on the run and change her identity every decade to avoid attention or being turned into a freak study. The only person in on her secret is her now-elderly daughter, Flemming (Ellen Burstyn). Throughout the years, she only formed attachments to her first husband and a pre-med student named William (Anthony Ingruber). In 2015, living under her alias "Jennifer Larson" back in San Francisco, Adaline works as an archivist. On her birthday at a New Year's party before she's about to move to Oregon, she meets the attractive, disarming Ellis (Michiel Huisman), who's quite persistent. Wary of opening herself up to another relationship since she can't grow old with him, Adaline listens to her daughter and takes a chance.

"The Age of Adaline" is the kind of unabashedly romantic fantasy that only works by suspending your disbelief and just not asking questions. Magic works better that way. If one can get past the scientific hokum that sets Adaline's de-aging in motion, a chance meeting between former flames is even easier to buy. The film works most gracefully and convincingly when chronicling Adaline's strange life that evades the ravages of time. She reinvents herself every ten years and makes for a cultured, old-soul woman who doesn't look a day over 30. It also helps that her best friend is a blind piano player (Lynda Boyd) and she refuses to be photographed. At the center are two love stories, and the more complicated one is never given the amount of time it deserves. It's not that Adaline and Ellis don't work well together as a couple who might endure, but the star-crossed romance between Adaline and William (Harrison Ford), Ellis' father, should have been explored further if they were indeed soul mates. In retrospect, more specific memories of Adaline from William's point-of-view might have enriched the film's love story and given it the final emotional punch it needed.

Blake Lively has been a lightweight actress in the past but has shown her strengths in TV's "Gossip Girl," both "The Sisterhood of the Traveling Pants" films, and "The Town." Adaline Bowman counts as her meatiest role, not to mention her first headliner, and she's up to the challenge. For one, she's beautiful with a timeless movie-star quality, but Lively also brings levity and an emotional depth to the part. At a New Year's party, she tells a young fellow that he looks like "a young Bing Crosby…type." When her beloved King Charles spaniel Reese is on his way out, it's poignant and heartbreaking to see Adaline having to outlive everyone, including all of her pets. As the wise Flemming, the incomparable Ellen Burstyn makes the wonky sight of playing Adaline's senior-citizen daughter surprisingly plausible and touching. The scruffy Michiel Huisman (TV's "Game of Thrones") is a charming catch as the handsome and cultured but blandly too-good-to-be-true Ellis, and he shares a lovely chemistry with Lively, but Harrison Ford hasn't given this vulnerable and finely tuned of a performance in ages. When older William first sets eyes on Adaline, calling herself "Jenny" but pretending to Adaline's daughter, the viewer feels the punch in the gut that he feels on the weekend he's about to celebrate a 40th wedding anniversary milestone with his wife, Kathy (Kathy Baker), and their two children. William can't get over the coincidence that his own son is dating the supposed daughter of his One That Got Away, and all of his emotions are palpable. Anthony Ingruber deserves credit for seamlessly emulating the younger William in flashbacks with a non-hammy Harrison Ford voice, and Kathy Baker and Amanda Crew also round out Ellis and William's warmly likable family members.

Handsomely shot in a modernized retro glaze by David Lanzenberg, the film cannily makes Vancouver locations standing in for San Francisco. Angus Strathie's costume design classically coifs Blake Lively, paying attention to her Adaline's agelessness but still not making her look out of touch with today's trends. For the full 110 minutes, the film is always along with Adaline, giving the viewer a reason to care about her seemingly inescapable immortality. While not as memorable as its premise, "The Age of Adaline" still works its spell as an affecting fable for grown-ups that's been made with pearl-like beauty and wisdom. Sure, it gets a bit hokey in the final act, with a key character reaction coming off much too low-key and reasonable, but it never feels creepy or overly sudsy, and had the film ended before its extraneous, too-tidy epilogue, it might have been even more resonant. If nothing else, Blake Lively is the raison d'être.