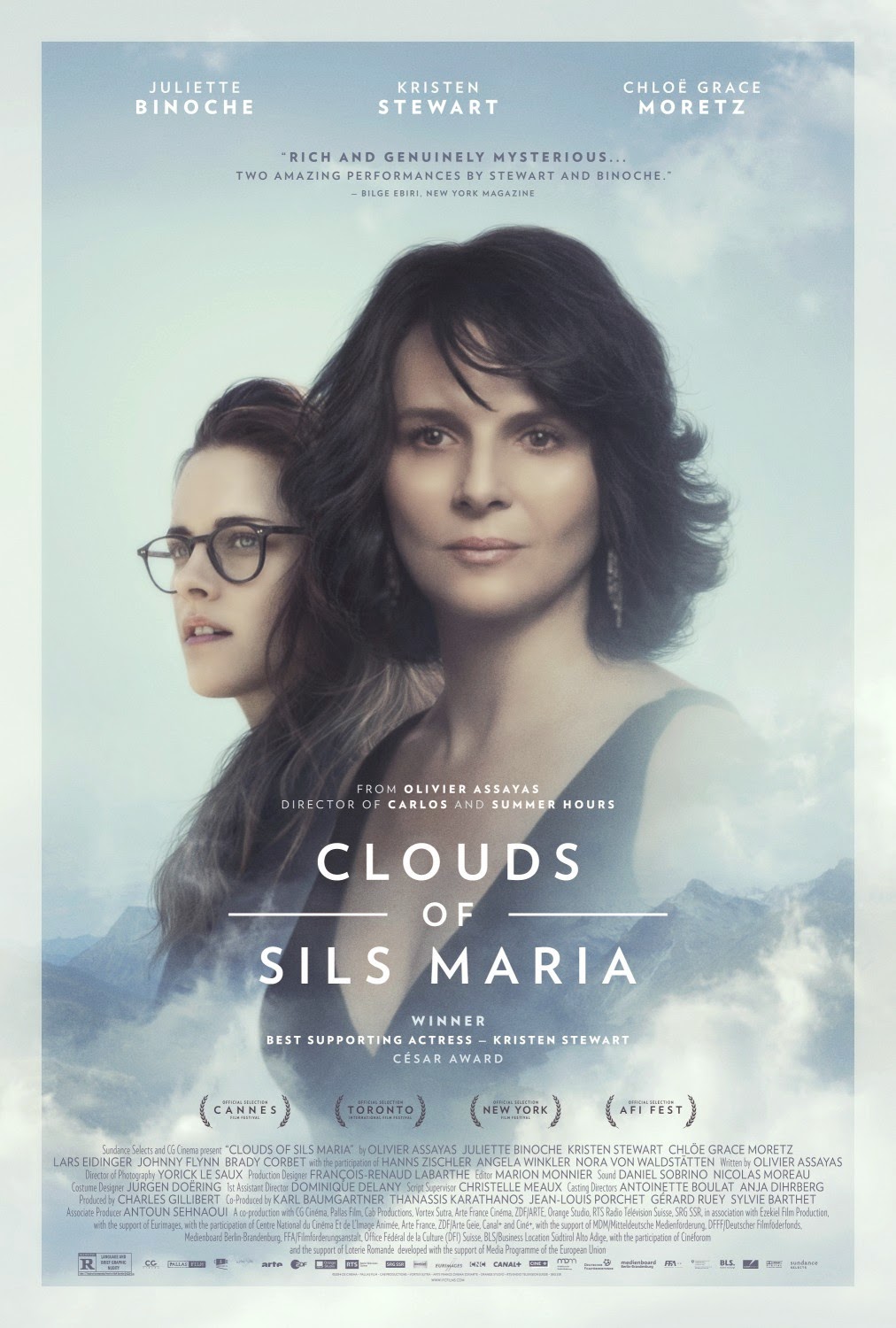 French writer-director Olivier Assayas' "Clouds of Sils Maria" is another film about art corroding into reality, but what it lacks in conventional dramatic push it makes up for it with its ambitious, often poetic looking glass of metaphorical meaning. Assayas may spell out his themes so much that subtext engulfs the characters and the story, however, he manages to do it in a fascinating and reflective way that isn't heavy-handed or pompous. It might not have the same bravura technical skill or emotional punch of Alejandro González Iñárritu's "Birdman or (The Unexpected Virtue of Ignorance)," still fresh in the memory from last year, but its achievements are more subtle and on a smaller canvas. Not only for its three outstanding female performances, the densely layered "Clouds of Sils Maria" deserves praise for its character-based meditation on acting, the end of an era, and the commerce vs. art argument in cinema.

En route on a train through the Swiss Alps, aging film actress Maria Enders (Juliette Binoche) and personal assistant Valentine (Kristen Stewart) are both priming for a ceremony to honor and accept an award for Maria's mentor, playwright and director Wilhelm Menchior. Double-fisting an ever-ringing cell phone and blackberry to answer personal calls for Maria's divorce and booking press appointments and photo shoots, Valentine soon breaks the news to her that Wilhelm had suddenly died of a heart attack. Maria owes the success of her career to Wilhelm and now wrestles with her emotions from his death. Setting foot in Switzerland, Maria is approached by a hip new director, Klaus Diesterweg (Lars Eidinger), to rework Wilhelm's "The Maloja Snake" for the stage and take on the role of Helena, the 40-year-old character pushed to suicide by the 20-year-old Sigrid, the role that put a then-18-year-old on the map. This news comes with baggage, as the actress who played Helena opposite Maria actually did die and the actress playing Sigrid will be filled by notorious up-and-comer Jo-Ann Ellis (Chloë Grace Moretz), a wild child who's all over TMZ for her violently drunken exploits and sarcastic TV interviews. Once she reluctantly agrees, Maria and Valentine retire to Wilhelm's cottage in Sils Maria, left to them by his grieving widow Rosa (Angela Winkler), and relationships are tested.

At any point, "Clouds of Sils Maria" could dive head-first into a post-"All About Eve" melodrama with overheated backstabbing and manipulation, but like that 1950 Bette Davis-Anne Baxter classic, it's perceptive and even wickedly funny. Like the aging Maria, writer-director Olivier Assayas never veils his obvious preference for artful cinema over popcorn movies and disdain for celebrity gossip, which Valentine voraciously reads. There is plenty of shop talk between actors and directors, actors and assistants, but there are also conversations, er, debates about how different generations interpret a film and what subjectively constitutes art. After she and Maria take in Jo-Ann's latest sci-fi movie in 3-D, no less, Valentine makes the point, "There's no less truth there in a supposedly serious film." As we see a clip from the movie, the scene set on a spaceship is too ridiculously silly to be taken seriously that it's no wonder Maria laughs at Valentine's validation of the movie. Maybe Valentine sees an honesty in Jo-Ann's performance surrounded in cheesy production design and costumes that Maria doesn't, or is her view just simplistic? Maybe Maria's highbrow taste in art over entertainment has stemmed from her jadedness of being in the business herself. Maria has outgrown hanging from wires in front of green screens and maybe the film industry, too.

In a profession that finds fewer and fewer meaty parts for actresses or casts them in worthless day-player roles as Concerned Wife or The Girl, it's quite encouraging to see a film with a 51-year-old actress being at the height of her powers, a 25-year-old actress being a revelation, and an 18-year-old actress just getting better and better. In nearly every scene, the irreplaceable Juliette Binoche is as expressive and luminous as ever, probably relating to Maria's vulnerable, insecure stance in her career in an industry that values youth more than talent. Holding her own every step of the way, even with all of her two-hander scenes with Binoche where they're just drinking, smoking and talking, is Kristen Stewart—yes, that one. Earning the title of being the first American actress to win the César Award—France's equivalent of an Oscar—for her performance, Stewart keeps proving her naysayers wrong, with 2009's "Adventureland," 2010's "The Runaways," 2014's "Camp X-Ray" and "Still Alice" and now this, that she really is worth her salt as one of the more impressive actresses of her generation. Bella Swan, who? With her facial expressions that diverge from her trademark lip-biting, Stewart's sharp, emotionally open performance speaks volumes about her put-upon Valentine, particularly when she continues running lines with Maria and it becomes tough to tell where the Sigrid-Helena relationship ends and the Valentine-Maria relationship begins. Last but not least, Chloë Grace Moretz is amusingly spot-on, sneakily leaving a mark as a Lindsay Lohan type who subverts Maria's expectations again and again after she's expecting a train wreck. From fawning over Maria with flattery in their meeting in a hotel lounge to the biting comeback she gives to Maria over how to play Sigrid, Moretz draws so many shadings out of Jo-Ann.

Named after the thick, foggy cloud bank that winds through the Alps, with stunning on-location lensing by cinematographer Yorick Le Saux, "Clouds of Sils Maria" might become a tad redundant but takes its good old time, impatient viewers be damned. Divided into three chapters, the film's elliptical structure begins from a distance to the viewer, scenes fading to black, and then slowly getting closer as characters start mirroring "characters" in the play and plot points blur between both the film and the play. Before filmmaker Olivier Assayas starts plainly stressing his themes with the use of his characters' mouths, he plays his cards close to the vest like an intimate drama that relies on character and dialogue rather than plot and finite resolutions. If being chilly and detached were a crime in cinema, "Clouds of Sils Maria" would fail on every level, but with that approach, the insights are greater and the payoff more unsuspectingly moving.