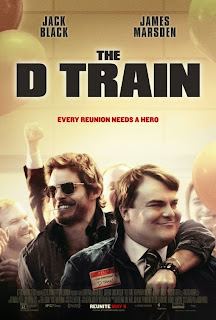 For those who don't like to see something different, expectations are going to kill "The D Train," and that's unfortunate. What looks like a cheerfully ribald, high-concept R-rated comedy at first glance has more in common with 2000's "Chuck & Buck"—an equally creepy and empathetic Sundance hit in which a 27-year-old man with incompetent social graces creepily goes too far to rekindle his friendship with his best pal from childhood—meaning it's darker than expected, harder to categorize, and doesn't have the failure of nerve most mainstream dark comedies do. Screenwriting team Andrew Mogel and Jarrad Paul (2008's "Yes Man") make their entrance as first-time directors with this nervy, unusually aching gem that sneaks up on you and keeps surprising with its narrative risks.

Dan Landsman (Jack Black) is the self-proclaimed "chairman" of the alumni committee for Grant Barklidge High's 20-year reunion. A member of the Class of 1994, Dan was not popular back in the day and nothing has really changed, as his committee members (including Mike White, Kyle Bornheimer, Henry Zebrowski and Donna Duplantier) go out afterwards for drinks without extending the invitation. He never left his Pittsburgh hometown, but he has Stacey (Kathryn Hahn), his high school sweetheart and wife of 14 years, their teenage son Zach (Russell Posner), and a new baby. Late one night while channel-surfing, Dan becomes starstruck with a TV spot for Banana Boat suntan lotion, as it stars the class rock star, Oliver Lawless (James Marsden), whom he presumes is now a big-time actor living in L.A. and puts him on a pedestal. The two weren't really friends, but Dan hopes to gain respect from his displeased committee and up the R.S.V.P.s by planning to go to the west coast and convince the so-called celebrity to come to the reunion. Making up an excuse to close a deal for his consulting firm on a business trip and lying to both his family and boss (Jeffrey Tambor), Dan ends up reuniting with Oliver in L.A. After a debaucherous night of heavy partying, where alcohol is consumed and cocaine is inhaled, and constant cab rides to bars, something happens back at Oliver's apartment. Once it comes time for Dan to go back to the east coast, he is left confused by the friendship he never had with Oliver.

Lying is the foundation of the squirmy brand of comedy for "The D Train," but there's a delicate sense of understanding and feeling to the characters. Dan Landsman can be a frustrating, even abrasive, character to follow, not unlike Matthew Broderick's Jim McAllister in "Election" or Ben Stiller's Greg Focker in "Meet the Parents." Overcompensating by calling himself a series of allegedly hip nicknames, shaving his face down to a "soul patch," concocting so many lies, and then coming across as petty and jealous, he is like watching a train wreck in slow motion. In a way, Dan is like all of us, wishing we had peaked in high school, and if we did, we're just like Oliver Lawless, giving everyone the impression that we still hold that crown in our adult lives when that's not exactly the case. Without spoiling the key plot turn that happens about thirty minutes into the film, what triggers an unrequited love of sorts between Dan and Oliver is refreshingly not handled as a gay-panic joke. Writer-directors Andrew Mogel and Jarrad Paul take it to a human level, finding the pain, confusion and longing in such a situation.

Since 2007's "Margot at the Wedding" and 2012's "Bernie," Jack Black has taken an admirable road in his career, being drawn to edgier, darker and more emotionally rich projects rather than the slapstick fare he made his name on and has hopefully washed his hands of by now. In one of his trickiest and most moving performances, Black is able to navigate through the inner struggle of a protagonist who's pathetic in his desperation but not a bad guy. Once he comes clean about his mistakes, one can't help but feel for him. There is such a magnetic way about James Marsden that everyone would want to be like his Oliver Lawless, or at least graduate the same year as him. A heartthrob with that jawline and million-dollar grin who, beyond the five o'clock shadow, hasn't aged much since 1998's "Disturbing Behavior," Marsden is terrific, fleshing out the reckless Oliver more than one expects to find. In a scene at a club where Oliver pretends to know actor Dermot Mulroney just to impress Dan, it's clear Oliver mirrors Dan, both of them masking their insecurities with a sense of cool. On the comedy front, Marsden sells a hilarious teachable moment about "hosing down lawn chairs" with Dan's son, who can't get any attention from his father for advice once Oliver comes to town. Also worth mentioning: Kathryn Hahn gets more to play than just the nagging stay-at-home wife, and she's wonderful at it; and Jeffrey Tambor is a subdued hoot as Dan's behind-on-the-times boss Bill Shurmur, who takes an Internet class on how to become more acquainted with using Google.

Challenging the so-called term "bromance" even beyond the 2009 indie "Humpday," "The D Train" is frequently uncomfortable, boldly progressive, and more than a little sad, albeit in ways that make the film smarter and more worthwhile. It's also a testament to the filmmakers for finding a note-perfect '80s-tinged score—along with song choices, like The Vapors' "Turning Japanese" and Foreigner's "I Want to Know What Love Is"—that lends to the nostalgia of high school reunions. The final scene almost gets too gooey and tidy, but it's handled rather nicely with compassion for both of its characters without feeling unearned or preachy. Unlike the character of Dan, who tries so hard to be liked, the film doesn't try hard to be liked. In fact, the web of lies Dan weaves on his own might force some viewers to check out early, not to mention from the fact that the film has more on its mind than being a broad, straightforward comedy. Take a chance on attending "The D Train."