The Bro Show: Unironically vapid "Entourage" for fans only 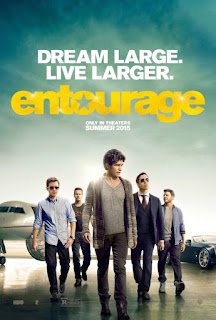 If you were only a casual viewer who caught a handful of episodes or have never caught on to the appeal of HBO's eight-season-long series "Entourage" (2004-2011), the film expansion probably won't garner much fanfare. Like the network's counter-programming for "Sex and the City," the show was loosely based on executive producer Mark Wahlberg's real-life experiences as an up-and-comer. Creator Doug Ellin (1998's "Kissing a Fool") writes and directs this big-screen continuation but has turned it into an unironically vapid, self-indulgent, wheel-spinning shell of its former self with nothing more to tell and with nowhere left to go with these characters, at least not here. With more douchiness and misogyny than you can shake a stick at, "Entourage" is a vicarious celebration of the easy-breezy male-fantasy lifestyle, even though the show seemed to be smarter than that, part-satirical, part-authentic while allowing us to eventually care about fictional actor Vince Chase and his entourage of bros. These guys had a good run, but their greatest hits have failed exponentially in transitioning to the silver screen.

Previously on "Entourage"… Annulling his rushed marriage after just nine days, Vince Chase (Adrian Grenier) is living the high life in Ibiza, Brazil, on his yacht full of hot women with his entourage. He gets a call from Ari Gold (Jeremy Piven), his bad-tempered former agent who's now a studio head and offers to give Vince a starring role and the chance to direct. Eight months later, Ari is bankrolling the project—"Hyde," a $100 million futuristic tentpole version of "Jekyll and Hyde"—through Texan billionaire investor Larsen McCredle (Billy Bob Thornton). Vince requests an additional $10 million for his already-over-budget passion project, so Ari has to fly McCredle's rotten son Travis (Haley Joel Osment) to L.A. to make sure his father is spending his money on something worthwhile. When Travis sees the rough cut of Vince's film, he takes plenty of notes, particularly the desire to cut Vince's 40-year-old half-brother, struggling actor Johnny "Drama" (Kevin Dillon), who was banking on his four scenes in "Hyde" to give him the recognition he thinks he deserves. Meanwhile, Eric "E" (Kevin Connolly) sleeps around while tending to on-again-now-off-again girlfriend Sloan (Emmanuelle Chriqui), who's pregnant with his child, and laid-back driver Turtle (Jerry Ferrara) enjoys the luxurious life he's earned from the tequila brand he developed with Mark Cuban and tries romancing MMA fighter Ronda Rousey. These bros have yet to change and never will.

The stylishly shot and edited title sequence, the cast and crew's names standing out on buildings across the glossy La-La-Land milieu and cued up to Jane's Addiction's now-culturally recognizable "Superhero," suggests a better time than one is actually in for. Within the eight seasons, the characters were more palatable and had more time to grow, so why this time is everyone such a self-involved, charmless asshole? Not that much time has passed. There are enough subplots and celebrity cameos galore—including Bob Saget, Jessica Alba, Armie Hammer, Andrew Dice Clay, Warren Buffett, David Spade, Liam Neeson, and there's much more where that came from—to fill five binge-watched episodes, but the writing lacks bite or even insight, the storylines are insipid and dramatically flat, and the entire thing just feels unnecessary. The "A" story here is a complete and utter misfire. It doesn't help matters that it centers on Vince's directorial debut, "Hyde," which in one clip looks abysmal, like an overpriced, overdirected Bod Man Body Spray commercial with Vince playing an EDM DJ with glowing eyes in a futuristic city. When Ari actually sits down to watch a screener of it, one does not anticipate his actual reaction to be him gushing over it, using words like "amazing," "masterpiece" or an "Oscar contender." Um, what? It's not only impossible to buy, but mistakenly says something about how out-of-touch the entertainment industry might be. Even the payoff with Texan co-financier Larsen and skeevy son Travis seems trivial.

As "Entourage" leader Vince Chase, Adrian Grenier is still more credible as a playboy who will never settle down with one hot model than a superstar with genuine acting talent (which Ari detected in an old Mentos commercial). Even so, Vince gets lost in his own story. Being the alleged moral center in the show, Kevin Connolly's E is now the worst and the most objectionable here. Even though he and Sloan are broken up but having a baby together, E sleeps with two women within 24 hours, only to be blindsided by both of them (and hooray for them). It was nice seeing Kevin Dillon come into his own as Johnny "Drama," the role of an older struggling actor that mirrors Dillon living in the shadow of his brother Matt, but his piggish, buffoonish shtick now feels abrasive and more groan-inducing than ever. Jerry Ferrara, as the amiable, now-svelte Turtle, is a warmer individual who would be spared if one could punch all of these male characters in their faces. His pursuit of Ronda Rousey (who's no less stiff playing herself) is cute enough, but it just takes up time without going anywhere that matters. Finally, Jeremy Piven is the source of what makes "Entourage," the movie, more watchable than not. He owns the role of Ari Gold, and his cutting barbs and angry tantrums, as well as one of his couch sessions with wife Melissa (Perrey Reeves) and their therapist (Nora Dunn), earn the most chuckles. As for the endearing Rex Lee as Ari's former punching-bag assistant Lloyd, he gets stuck as an afterthought, spending his time trying to get Ari to give him away at his wedding to his soon-to-be-husband (Greg Louganis). For a film about the best of entitled friends, it has no room for women, unless they are bikini-clad sex dolls on yachts, carrying a child, or being one-half at marriage counseling. The stunningly beautiful and charismatic Emmanuelle Chriqui deserves better than being a baby factory, Sloan's pregnancy ultimately bringing the gang together for the climax, and the nuances in her relationship with E are thinned out. Also, the always-terrific Debi Mazar is made a face in the crowd, none of her lines memorable enough to register as sharp-tongued press agent Shauna Roberts.

All of the so-called surprises will be kept under lock-and-key, but the biggest surprise of all is how far writer-director Doug Ellin has jumped the shark. What can be positively noted is that everyone on screen actually looks pleased to be here, which is always nice, and the fans will probably dig the return of their now-defunct show on a bigger screen. With that said, if 2008's "Sex and the City" and 2014's "Veronica Mars" worked better as their own stand-alone films, "Entourage" seems only exclusively for fans. Never as funny as it thinks it is and not very enlightening as an insider-Hollywood piece, "Entourage" is occasionally bailed out by watching the cast, especially Piven, but it's hard to care when we're in the company of annoyingly static people and their stale problems. Better at being pure fan service than an actual film, it will probably satisfy the faithful, and you know who you are. The rest of us aren't invited.