Mind Control: "Inside Out" funny and brightly colored but also wise and profound 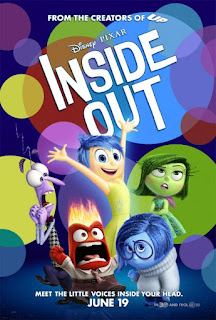 Ever since Disney and Pixar's first feature-length animated release in 1995 with "Toy Story," the studio has always specialized in provoking emotions and themes of growing up. They also do not specialize in making animated films for kids but in making animated films that work on multiple, more sophisticated levels. What appeared as a fluffy, antic-heavy throwaway diversion in its early advertising campaign, "Inside Out" is Pixar at the height of their powers. It's fast, brightly colored and rambunctious for kids, sure, but look closer and it's also wise, clever, stirring and profound for adults. Writer-director Peter Docter (2001's "Monsters, Inc.," 2009's "Up"), co-director Ronaldo Del Carmen, and co-writers Meg LeFauve & Josh Cooley bring a grown-up perspective to their animated world of personified emotions inside a preteen girl's mind. It's ambitiously conceived and terrifically executed.

When Riley (voiced by Kaitlyn Dias) was born, her first emotion was Joy (Amy Poehler), who made her mission that the girl is always full of happiness. From there, Riley's emotions grow more complex, adding Sadness (Phyllis Smith) and eventually Fear (Bill Hader), Anger (Lewis Black) and Disgust (Mindy Kaling). With all five emotions occupying the headquarters of Riley's brain, it becomes a mighty crowded panel for Joy to control. There are floating "islands" that represent Riley's family, friendship, honesty, love for ice hockey, and her goofball side. At 11 years old, Riley and her parents (Diane Lane, Kyle MacLachlan) must move from Minnesota to San Francisco and she experiences the struggles that come with change. When Riley's core memories, stored in yellow-coded orbs, keep getting touched by Sadness and then get sucked out of headquarters, so do Joy and Sadness. Meanwhile, Riley's islands begin to shut down, while Fear, Anger and Disgust try to normalize Riley. If Joy and Sadness don't return to headquarters, Riley may never be happy again.

Conceptually, "Inside Out" is heady, complex stuff, but it's still a lively, vibrantly animated comedy. The chemistry between all five of Riley's emotions is never not fun to watch. In another instance, we get to see the emotions inside Mom and Dad's headquarters. Respectively, they include a table of bespectacled, type-A women who wish they had met a Brazilian man and a table of mustachioed, sports-loving men whose minds wander. There are light, inventive moments when Joy and Sadness go on their journey, coming across a couple of memory inventory workers who find that Riley's four-year piano lessons have started to fade and keep sending the memory of an annoying chewing gum jingle to her mind (one of the film's choice running jokes). The happy-sad twosome then encounters Riley's old imaginary friend Bing Bong (Richard Kind), who leads them down a dubious shortcut through the restricted area of Abstract Thought, which hilariously turns the three into different artistic shapes and styles. When Riley enters REM sleep, Joy and Sadness also venture into "Dream Productions," visualized as an actual movie studio, only to come up against a creepy birthday clown and Grandmother's scary vacuum, witty little details that never cease.

Headed by Amy Poehler as the ever-positive Joy, the stellar voice cast does excellent work, never calling attention to itself to distract from the characters. The deadpan Phyllis Smith is absolutely inspired as Sadness, a blue downer who always feels dejected and vulnerable that it's almost adorable. In the wrong hands, both roles of Joy and Sadness could have been rendered annoying, but Poehler and Smith very much balance one another out with their warmth and energy. Also, filling out the personalities of Fear, Anger, and Disgust, Bill Hader, Lewis Black, and Mindy Kaling are all frequently funny at inhabiting such personified emotions. Another standout is Richard Kind, who heartbreakingly voices the role of Riley's old imaginary friend Bing Bong, a half-elephant, half-dolphin creation who cries candies.

Like most of Pixar's output, "Inside Out" provokes both feelings of joy and sadness. (Preceding the feature, Pixar short "Lava" about the meeting of two volcanoes is an appetizer for how simple and simply sweet an animated film can be in still registering emotions.) As is always the case, the animation is a candy-colored sight to behold, even in the photo-realistic details of Riley and her parents' Bay Area apartment. The film's biggest achievement, however, is in its imaginative use of the human mind and the message that feelings can and must co-exist together. With puberty still on the way for Riley, "Inside Out" could lead to a franchise down the road—"Toy Story 2" and "Toy Story 3" are examples of how well that could go and and "Cars 2" would be an example of Pixar's lowest point—but the studio definitely has an original here. It will not only charm the pants off of adults and kids alike, but it will make everyone feel.