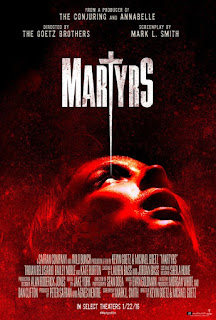 To box in 2008’s “Martyrs” as a slice of “torture porn” or an endurance test would be too reductive, as it is a brave, disturbing, unrelentingly gripping French-Canadian horror film about human trauma, suffering and … existentialism. It’s the benchmark in the annals of extreme, transgressive horror cinema, but it wouldn’t be long before it went through the American remake grinder (with producer Jason Blum’s stamp of approval). Now, when any film that was already effective the first time around must be regurgitated, one should have a scintilla of open-mindedness in case the new version offers something on its own merits or a fresh, individual voice. Eight years later, this “Martyrs” stakes less of an impact and, alas, cannot justify a reason to exist. What the filmmakers come up with here is no less punishing but feels less earned, being stripped of devastating emotional power.

A decade after escaping from the warehouse where she was imprisoned and abused, a still-scarred Lucie (Troian Bellisario) tracks down the man and woman responsible for torturing her, killing them and their children with a shotgun. Lucie calls and informs her one and only friend Anna (Bailey Noble), who formed an inseparable friendship with Lucie in an orphanage, that she has found her captors. Arriving to the suburban bloodbath, Anna is horrified to see what her seemingly unhinged childhood friend has done and helps her dispose of the bodies. She’s not too convinced that Lucie killed the right people, until Anna comes across a hidden underground facility and a cult obsessed with martyrdom.

Pascal Laugier’s “Martyrs” was unpleasant and unflinchingly brutal, sure, but it was a captivating, unforgettably horrific, even thought-provoking experience. For this subtitle-free U.S. iteration, directors Kevin Goetz & Michael Goetz (2013's "Scenic Route") and screenwriter Mark L. Smith—who gets a pass because he also wrote spectacular revenge-cum-survival epic “The Revenant”—do at least make a few alterations in the film’s second half, like the addition of a character and the fate of someone. However, said alterations aren’t respectable improvements, just examples of cutting corners and missing the point. The transplanted setting to a modest farmhouse in Northern California instead of an industrial-chic home is one of the savvier choices, considering it’s an idyllic cover for something far more sinister. To read the rest of the review, go to Diabolique Magazine.