All the Single Ladies: "How to Be Single" gets by on good will of bright cast and shame-free message 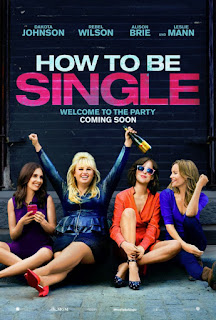 Of the two film adaptations of a Liz Tuccillo novel—the first being 2009’s smarter, more perceptive “He’s Just Not That Into You”—“How to Be Single” is never as insightful as it could be about the dating world in the 21st century. It’s also uneven, structurally and tonally, and doesn’t add anything that wasn’t already gleaned from six seasons of “Sex and the City,” but for a female-fronted studio comedy, it shows no shame in the progressive notion that not all women need to be in a committed relationship to be happy. What it does have next to some occasionally sparking dialogue, a wise and productive final message, and several big laughs is a bright, gregarious cast, generating so much good will that deficiencies in the script can be brushed off. Without them, it probably wouldn’t work as well, but more often than not and in the end, “How to Be Single” winds up a pleasant surprise.

Having never been unattached, sweet, innocent Alice (Dakota Johnson) decides to take a break after four years with her Wesleyan University boyfriend Josh (Nicholas Braun) once making the big move to New York City. Once landing a job as a paralegal at a law firm, she learns the ropes of singledom from her uninhibited co-worker Robin (Rebel Wilson), who parties hard and never wants to settle down. Meanwhile, Alice’s older sister Meg (Leslie Mann) is a career-driven obstetrician who likes her independence too much to find a man or have a baby, until she suddenly gets baby fever and meets Ken (Jake Lacy), a cute, funny eligible bachelor. Also in New York City—and closer than you think but never actually connecting with the other characters’ threads—type-A Lucy (Alison Brie) has her own dating algorithms and uses the bar below her apartment for free Wi-Fi and a meeting place for her many blind dates. The bar owner, Tom (Anders Holm), is a womanizer with his own theories. As all of these single ladies (and gentlemen) try their best to navigate sex, love, babies, and marriage, perhaps being single is the best option for all of them.

Director Christian Ditter (2015’s “Love, Rosie”) and writers Dana Fox (2009’s “Couples Retreat”), Abby Kohn and Marc Silverstein (2009’s “He’s Just Not That Into You”) have a lot to juggle, but for the most part, they create a crowd-pleaser that’s bawdy without being a crass gag-fest and still forms a group of characters that are pretty enjoyable company. In her second lead role after being the shining takeaway in “Fifty Shades of Grey,” Dakota Johnson is decidedly the real deal. As Alice, she is just lovely with an adorably sly comic timing and self-deprecation. Her impression of Rebel Wilson’s Robin is a hoot, too. With any luck, Johnson will soon find a project that’s as good as her; whenever she is on screen, you pay attention. An acquired taste for some viewers—an opinion that is completely lost on me—Rebel Wilson is certainly typecast as the confident, free-wheeling life of the party with the most sexual agency, but she's never not entertaining as an all-in comic player and rarely hogs the others’ spotlight, either. Here, her Robin is such a vaguely drawn character that asking questions about some final revelations concerning her way of life shouldn’t be paid much mind. Leslie Mann’s Meg is a little frustrating in the nonsensical decision to not tell Ken, with whom she’s already romantically involved at this point, that she is already pregnant after in vitro. Then again, Mann radiates a believable and tender sisterly bond with Johnson, and she shares a touching moment with a baby she delivers, warming her up to the idea of having one of her own. She also earns hearty laughs; a scene where Meg not so subtly tries to stifle a yawn and makes a stroke-having face in the middle of meeting Ken at Alice’s office Christmas party is just one example of Mann’s distinct comic timing put to use here.

Kind of like the Drew Barrymore character in “He’s Just Not That Into You,” Alison Brie’s Lucy is never smoothly integrated into the story and rendered a bit of an afterthought. Who is she? Less than a real person, Lucy is one of those annoying stereotypes that of a desperate, marriage-hungry drip. She lives to carry around bridal magazines, design dating algorithms, be signed up on ten different dating sites, and volunteer for children’s storytime at a bookstore, where she meets George (Jason Mantzoukas), but is never actually seen working a job. Lucy never officially meets Alice, Robin, or Meg but somehow ends up at Alice’s rooftop birthday party; sure, it’s a wildly populated party and friends bring friends of friends, but come on. Aside from talking her way out of a lie in front of a bride-to-be acquaintance and her bachelorette-party gal pals or having a meltdown in front of a room of kids, Brie is too funny, appealing and spry of a presence to be this misused. The men in the cast lend solid support, including Anders Holm (2015’s “The Intern”), charming and convincing as womanizing bar owner Tom; the delightfully ubiquitous Jake Lacy, always likable as Meg’s romantic interest Ken; and a sweet and surprisingly understated Damon Wayans, Jr. comes almost out of another movie as successful developer David, a widower and single father who shows an interest in Alice.

In exchange for excising some of the more extraneous characters that meander the interwoven narrative, “How to Be Single” could have let some of the core relationships breathe a little more in a sharper rewrite. However, where the writing slips, the core actresses and ensemble pick up the slack. Director Ditter gets right the feeling of being in the big city, particularly the fluid illusion he creates when Alice moves into her own apartment and transforms it into what looks like home. Clearly after this reviewer's own affections, he also shoots New York City as a romantic winter land and makes dreamy use of the Christmas tree at Rockefeller Center. The eclectic, still-approvable mix of songs on the soundtrack seem to have been chosen out of a hat—Heart’s “Magic Man,” Charli XCX’s “SuperLove,” Baauer’s “Harlem Shake” and Fifth Harmony’s “Worth It”—but Frankie Valli’s “Can’t Take My Eyes Off You” stands out the most for its moving use in a scene between a supporting character and his child. A subversive romantic-comedy for the ages? Get real, but as a fun girls’-night-out diversion, “How to Be Single” goes down lighter than an Irish Car Bomb, and it’s refreshing to see a movie about women that doesn’t hate them.