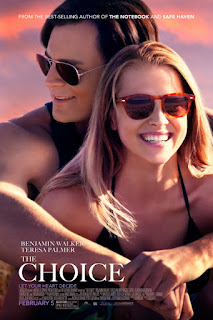 As the annual—the eleventh and counting—adaptation of a Nicholas Sparks best-seller, “The Choice” is what it is, so perhaps it does exactly what it’s supposed to do. Sparks has cornered the market on swoony romances that tick all the same hallmark boxes, and by now, it’s a pre-packaged formula that’s been repackaged. A charming, sleepy coastal town. Romantic canoeing or rowing on the water. Handwritten love letters. A tragic twist of fate. Quadruple check. While the films based on the author’s stories have been made with varying degrees of success, Sparks knows how to manipulate his readers' emotions and fans of his stories taken to the screen will know what they are in for as well. There just isn’t much apple-and-orange difference between any of them from a narrative perspective, only quality and whether or not it triggers the proper emotional response. Doing anything to elicit an “aww” moment, “The Choice” even shamelessly throws in a box of adorable newborn puppies.

Travis Parker (Benjamin Walker) is a cocky but good-hearted country boy who co-owns the local veterinary clinic in Wilmington, North Carolina with his widower father, Shep (Tom Wilkinson). He’s been on-again, off-again and then on-again with his ex-girlfriend Monica (Alexandra Daddario) but can never seem to commit. Then Travis meets his new next-door neighbor, Gabby (Teresa Palmer), a beautiful, intelligent medical student who’s focused studying for her boards. One night when she has finally had enough of Travis blasting his music, Gabby stomps over to complain but later warms up to him, especially once his dog, Moby, impregnates her dog, Molly. Next thing Gabby knows, her beefy, wealthy doctor boyfriend Ryan (Tom Welling) has to go away to Atlanta for a few weeks, leaving her plenty of time to make Travis dinner and fall in love.

Photographed with the postcard-prettiness that comes with shooting on-location with beautiful people seemingly swept right off the J.Crew showroom, “The Choice” is too comfy and painless to get mad about but still an ultimately bland affair that only boosts bare-minimum interest. Director Ross Katz (2015’s “Adult Beginners”) and writer Bryan Sipe play to expectations from the word go, sucking out any remaining suspense from a needless flash-forward framework that bookends the story. Before this ends up being little more than a Sparksian mix tape—which really isn’t much of a mix—as the dominoes start getting knocked and the necessities of the script begin to rear their head, the film is pleasantly low-key being in the company of two pretty, likable people like Travis and Gabby. Despite their love-at-first-hate meet cute being a foregone conclusion, the characters at least have cute flirtations, a nice birthday dinner in memory of Travis’ deceased mother with sister Steph (Maggie Grace) and their father, and a fleeting but interesting discussion about faith. Once Travis and Gabby consummate after their dinner date, it’s in a sex scene both melodramatic and heated as they vigorously clear the dishes off the kitchen counter and the dinner table. With neither one of them acknowledging that Gabby is already spoken for, it would seem she had a brain aneurysm to forget Ryan will be returning to town, putting a rain check on dealing with the consequences that will come with her choices.

If there’s any reason that “The Choice” works on any tolerable level, it’s because of Teresa Palmer (“Warm Bodies”) and Benjamin Walker (“Abraham Lincoln: Vampire Hunter”). They’re not exactly A-list yet, but she has always been a winning presence and he has a genuine Southern charm, and the two of them share a nice enough chemistry. As Gabby, Palmer gets to be the more fallible one by cheating on her boyfriend with her neighbor. Walker gets to turn arrogant to endearing on a dime, while also sometimes having to take his shirt off because it’s North Carolina and it’s hot, or something. The lovebird leads are given genial support by Maggie Grace, who has to work against an obvious wig as Travis’ sweet sister Steph; Alexandra Daddario, luckily not asked to turn her Monica into a backstabbing shrew; and Tom Wilkinson, here to be wonderful and bring the most poignancy as Travis and Steph’s father who might also get another chance to meet someone his age.

The “choice” in question won’t be spoiled here, but let’s just say it’s a serious choice after a life-altering event throws a wrench into Travis and Gabby’s everlasting bliss. It's also less of the ridiculous, hard-to-swallow variety, so no one is revealed to be a ghost or a surprise heart donor. If it’s not a terminal illness, it’s an accident of some sort. Perhaps it sounds as if “The Choice” is worse and more deserving of derision than it really is; it's surprising Marlon Wayans hasn’t yet skewered the low-hanging fruit of Nicholas Sparks adaptations. It’s neither good nor bad, just by-the-numbers bait that will satisfy its undiscriminating target audience. At the end of the day, you have to make the choice for yourself. Will you put on your blinders and just surrender to the heartstring-tugging in spite of yourself, or will you stay strong with your arms crossed and your tear ducts dry?