The Real Joker: Reynolds, a hard R rating and a blade-sharp script make "Deadpool" a blast 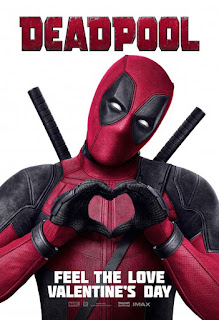 For hardcore Marvel fans, there was giddy anticipation for a “Deadpool” movie since the early stages of development but equal trepidation that it wouldn’t be R-rated enough. For the uninitiated (myself included), there was the worry that a “Deadpool” movie would be too cute, too mean-spirited and too juvenile, based on early teaser trailers of the anti-hero who would probably tell Spider-Man to go shove his responsibility. Besides, jokey sadism can be a hard balance to walk. Well, it is pleasing to say first-time feature director Tim Miller and “Zombieland” screenwriting team Rhett Reese and Paul Wernick hit the bull’s-eye with the finished product proper. Irreverent and exceedingly entertaining, this is a refreshing change of pace that has more fun subverting the weary, by-the-numbers direction of the superhero formula and commenting on itself rather than fitting itself into the Marvel Cinematic Universe. Crank up the personality of "Guardians of the Galaxy" and “Ant-Man” to 100, add a hundred-plus obscenities and trigger-happy killings, and you have this blast of a superhero movie for adults.

The sardonic, fourth-wall-breaking Deadpool fits the wisenheimer persona of Ryan Reynolds like a glove fetish spandex suit. Before earning his anti-hero moniker, he’s Wade Wilson, a flippant military-assassin-turned-mercenary-for-hire in New York City. When Wade meets beautiful escort Vanessa (Morena Baccarin), it’s all over; they’re compatible in the bedroom and in an actual relationship. It’s not until the couple moves in together a year later that Wade gets diagnosed with terminal cancer. He soon gets a chance to live, or so he’s told, when recruited by a secret agency who offers him an experimental cure. Once Wade leaves Vanessa in the middle of the night, he finds himself in a torture chamber, being injected with a serum by Francis Freeman (Ed Skrein) and the super-strong Angel Dust (Gina Carano) to trigger a mutation in him. Wade ends up facially disfigured but far from dead, making Francis first on his long shit list.

Rated R for a reason and definitely not for those who still play with action figures, “Deadpool” is unapologetic in everything it wants to do, whether it’s being profane and smart-assy or super-violent and very bloody. That’s just how this snarky, katana-swiping character rolls, so bravo to 20th Century Fox for learning from their mistakes (ahem, 2015’s “Fantastic Four”) and letting the filmmakers make the film they wanted to make and never betraying artistic integrity in the name of commercialism and accessibility. Based on the Marvel comic-book character created by writers Fabian Nicieza and Rob Liefeld, the film opens in medias res, introducing Wade Wilson already in the red suit as Deadpool. It is decidedly a gamble, trusting that the viewer will eventually care about a self-proclaimed bad guy who takes care of worse guys in over-the-top fashion. It does help that the first stylized action set-piece, a highway collision, is slickly staged, fleet-paced, genuinely exciting, and funny as hell. Then, when the film goes into flashback mode to show how Wade Wilson came to be Deadpool, it’s an “origin story” made compelling again. As the plot gets underway, it might actually remind one somewhat of Sam Raimi’s “Darkman,” a 1990 revenge/superhero/horror film that found Liam Neeson’s title antihero disfigured and going into hiding from his girlfriend and the men who left him for dead.

Ever since his too-brief appearance as the character in 2009’s “X-Men Origins: Wolverine,” Ryan Reynolds was seemingly put on this planet to play Deadpool. He not only embodies the tongue-in-cheek attitude of the “Merc with a Mouth” but manages ample empathy in order for the viewer to root for a foul-mouthed killing machine. When sharing a scene with Reynolds, the eye-catching Morena Baccarin (TV's "Gotham") gets to be his equal as Wade’s tough-chick girlfriend Vanessa, and their chemistry could light a torch. Later on when she’s kidnapped by Francis/Ajax, Vanessa is still no damsel-in-distress, as she’s more than competent enough to take care of herself when need be. Deadpool also gets a fun fivesome of foils in T.J. Miller, as Wade’s repartee-ready bartender buddy Weasel; Karan Soni, as nerdy cabbie Dopinder; Brianna Hildebrand, as moody mutant trainee Negasonic Teenage Warhead, and Stefan Kapicic (or his voice at least), as the literally steely but compassionate mutant Colossus; and Leslie Uggams, a wonderful standout as Deadpool’s blind roommate Blind Al. Last but still not least, in the “British Villain” role, Ed Skrein (2015’s “The Transporter Refueled”) is fierce and detestable, as he should be.

Helmed with a rapid-fire glee and paced like a bat out of hell by Tim Miller, the film promises the wisecracks and pop culture riffs come fast and furiously. Placed over a freeze-framed tableau of blood-squirting, limbs-splitting mayhem while cued to Juice Newton’s ‘80s pop hit “Angel of the Morning,” the ultra-meta opening credits are so inspired and laugh-out-loud funny it would be a crime to spoil any of it. Let’s just say no one in the cast and crew is credited by the names on their birth certificates. Screenwriters Rhett Reese and Paul Wernick put forth their maximum efforts with a playful, razor-sharp script that never loses their crime-fighting protagonist’s sense of humor or his ability to do what is right. The jokes of the verbal, self-referential and visual varieties almost always land, whether it’s a goof on the studio affordability for only two X-Men from the Mutant Academy, the name-checking of Patrick Stewart and James McAvoy, or an all-in-good-fun jab at Liam Neeson and his interminable “Taken” series. Deadpool also breaks the fourth wall a lot, but it’s a device used cleverly and sparingly that it never becomes obnoxious. There is the slow-motion walk with Deadpool and his two companions, but even director Miller finds a way to make that stylistic trope fresh. He’s also supplied the film with terrific song choices to match Deadpool’s loose and unpredictable personality, from Salt-N-Pepa’s “Shoop” to Wham!’s “Careless Whisper.” And, of course, there is a post-credits stinger, but it’s the best one yet, simultaneously making fun of us for waiting until the end and paying homage to a certain ‘80s classic. “Deadpool” is unlike anything else born out of the Marvel Universe, which needed this kind of kick in the pants.