People Suck: "I don't feel at home in this world anymore." a poignant, blackly comic indie 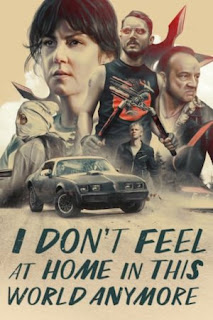 Soul-searching and nihilism cross paths in “I don’t feel at home in this world anymore.,” the very auspicious directorial debut of actor Macon Blair, who’s already proven himself a nuanced performer in front of the camera between 2014’s “Blue Ruin” and 2016’s “Green Room” (both written and directed by best friend Jeremy Saulnier). In telling his story of a woman who’s grown increasingly fed up with people around her, the film dabbles in a few different genres, from an observational single character piece to a relationship dramedy to a violent crime-thriller with farcical undertones. Here is a strange, great little indie that welcomes an absurdist streak laced with poignant pangs of truth through a simultaneously outlandish yet believable chain of events.

Ruth (Melanie Lynskey) is reaching her tipping point. A nursing assistant on the meek side, she finds herself losing her capacity to care for people who are rude and awful: a patient takes her last breaths right before uttering racist epithets; a fellow bar fly spoils the ending of a book Ruth is reading; and someone completely cuts her off in a grocery store checkout line. When she comes home, her place has been robbed, but the only missing valuables are Ruth’s grandmother’s china, her laptop, and her antidepressants. With the police putting off the robbery—since she left her back door unlocked, they don’t consider it unlawful entry—Ruth takes matters into her own hands. First, she makes a plaster of Paris cast out of the intruder’s footprint in her backyard and then finally has luck tracing the exact location of her stolen laptop with the lost-and-found app on her phone. Even if she doesn’t have a search warrant, Ruth goes off to the address but not before asking for backup from her oddball neighbor, Tony (Elijah Wood). Sooner or later, Ruth and her new buddy, armed with nunchuks and ninja stars, get more than they bargained for without knowing that the real thieves, Marshall (David Yow), Dez (Jane Levy) and Christian (Devon Graye), are on their tail.

The wryly amusing opening montage of public annoyances and disaffection rings incredibly true and might even hold up a mirror to the worst tendencies in all of us. Immediately, one can relate to Ruth and her up-to-here exasperation, spectacularly played by national treasure Melanie Lynskey, who’s once again given the chance in a lead role following 2012’s “Hello I Must Be Going.” A character actress of modest subtlety, emotional nuance, and comedic timing, Lynskey is sublime, stingingly sad and adorably amusing in equal measure. It is a reactive role that Lynskey makes feel proactive yet ill-equipped. Elijah Wood is offbeat and oddly sweet as Tony, who’s more than a colorful, nunchuk-swinging caricature; he likes lifting to heavy metal music, walking his dog, and going to church. Devon Graye, Jane Levy, and David Yow make up a suitably weaselly bunch, and each of them are interesting in their own evil ways. A hilarious Christine Woods even makes quite the impression in all of two scenes as Meredith, a bored, day-drinking housewife who happily invites Ruth and Tony to come into her home when they pretend to be cops none too well.

“I don’t feel at home in this world anymore.” (a perfect title taken from a 1962 Jim Reeves song, “This World is Not My Home”) could feel tonally uncertain or tangential at times, but everything still feels of a piece with Ruth’s messy, restorative journey. As written and directed by Macon Blair, the film never loses its way with Ruth and Tony as two characters we care about. When the film does shift gears into darker territory, explosions of ultra-violence are skillfully staged and loaded with suspense. The climax is a knockout, satisfyingly grisly near a swamp in the forest as it is strikingly shot by cinematographer Larkin Seiple (2016's "Swiss Army Man") in Portland, Oregon. If the characters didn’t feel as grounded and specific to one world as they do here and filmmaker Macon Blair didn’t have such a command of tone, the outcome would be different. As is, “I don’t feel at home in this world anymore.” is a special, genre-fluid gem that’s as much about humanity as it is about vigilantism. Ruth might not have any faith left in the world at the beginning, but by the end, she certainly finds hope where she can get it.