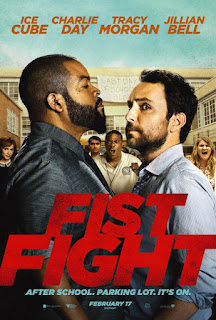 The very definition of a one-joke comedy, “Fist Fight” is about as hilarious as the thought of two grown-ass teachers picking a fight after the bell rings. That premise makes it sound more like a “Funny or Die” sketch video stretched to feature-length than a film that was made with heart, soul, and talent, leaving this wearisome mediocrity to completely hinge on one’s tolerance for the combined comedic stylings of Charlie Day and Ice Cube. If you aren’t irritated by Charlie Day, you will probably like “Fist Fight.” If you find Ice Cube’s constant glowering humorous enough, you will probably like “Fist Fight.” For better or for worse, it is exactly what you think it will be.

On the last day of school, it's pure anarchy at Georgia’s Roosevelt High School, as the seniors superglue everything to the principal's desk, send meth-dosed horses running freely through the halls, and play other pranks on their teachers. It's also the day that the public school administration is making budget cuts and laying faculty off. Mild-mannered English teacher Andy Campbell (Charlie Day) hopes his job is still safe, seeing as he has a pregnant wife (JoAnna Garcia Swisher) and daughter (Alexa Nisenson) at home. When Campbell witnesses the aggressive, borderline-psychotic attitude of hot-tempered history teacher Mr. Strickland (Ice Cube) when his class won’t pay attention, both teachers are called into the office of Principal Tyler (Dean Norris). As a result, Strickland is fired and challenges Campbell to a fight in the parking lot after school. How far will Campbell strain to get out of this teacher showdown?

Director Richie Keen (who has directed episodes of FX’s “It’s Always Sunny in Philadelphia”) and first-time screenwriters Van Robichaux & Evan Susser are clearly out to make a mean-spirited, brazenly stupid farce and set their premise in the universe of a broad cartoon. In this world, teachers swear in front of their students, Strickland angrily takes an axe to a student’s desk, and students aren’t much better than Damien Thorn on the last day of school. As profanity and flagrant vulgarity tend to cover for genuine setups and punchlines of jokes here, "Fist Fight" intermittently feels more like detention than an enjoyably crude comedy. It's not about prudishness, but when the two-dozen-plus use of the F-bomb begins to sound forced and uninspired, it's a sign of laziness. This even extends to a scene set at a school talent show where Campbell's 10-year-old daughter chooses to sing Big Sean’s explicit “I Don’t Fuck With You” over “Seasons of Love” from “Rent.” Also, it seems like the filmmakers were bent on cramming in as many phallic jokes as they could, especially in the first half, as they keep revisiting two students mowing the football field into the shape of penis ejaculating on a set of breasts. A better running bit, also part of the Senior Prank Day, is a mariachi band following the principal around.

The script lets Charlie Day and Ice Cube do their own respective “thing," and these two play off each other well as comic foils. Day has a high-pitched, over-caffeinated comedic shtick that should be abrasive but worked in the first “Horrible Bosses.” As the mildly spineless Andy Campbell, he hits the mark when the character gets wildly exasperated. Ice Cube works fine within his prickly, one-note role as Strickland, who’s intentionally an enigma and never softened, but his only standout moments are an attempted mediation at a Model UN club table and his priceless reaction to a new-fangled coffee maker in the teacher's lounge. Otherwise, he has played this fearsome, stone-faced type before and even quotes his N.W.A. song with, “Fuck tha police," as if recognition equals cleverness.

Everything surrounding the big fight is of the hit-and-miss variety when involving the Greek chorus of extraneous characters. Christina Hendricks plays French teacher Ms. Monet, who carries a switchblade on her person and wishes harm on Campbell for misunderstanding a situation with him and a student in the men’s restroom, but her character is not fully realized to really amuse. Tracy Morgan is the football coach who’s trying not to screw his players’ mothers, and he gets a few choice lines, as does Kumail Nanjiani as a not-very-intimidating security guard. And, if any film needs a boost from a go-for-broke scene-stealer, it is usually Jillian Bell, here as guidance counselor Holly Grossman, who takes meth before school and inappropriately talks about having sex with a student. Her bits often hit, despite the questionable taste of the material, but like a microcosm of the rest of “Fist Fight,” jokes get beaten into the ground repeatedly. Ultimately, increasing annoyance just outweighs the chuckles that do exist, so by the obligatory outtakes that desperately try to make us think we had a better time than we did, it’s hard not to scowl as hard as Ice Cube. Viewers might be better off catching an episode of TV Land’s school-set show “Teachers,” which happens to be edgier, funnier, more acerbic, and it's on cable.