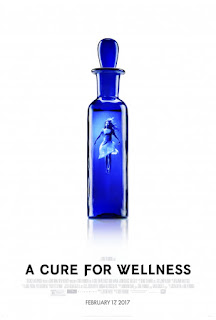 A studio like 20th Century Fox has taken quite the chance on Gore Verbinski’s psychological spa-of-horrors opus “A Cure for Wellness,” and good on them. It’s not a movie based on a novel, a classic film, or, Heaven forbid, an amusement park ride, but in its own richly atmospheric, perverse, and deliciously sick way, it’s a fairy tale smashed to pieces, a wicked indictment of corporate yuppiedom, and the giddily wacky result if Paolo Sorrentino’s “Youth” collided with Martin Scorsese’s “Shutter Island” and the Hammer horror pictures of yore. Defiant and enticingly strange, “A Cure for Wellness” is inventively conceived and stunningly executed as a sensuous but inescapable gothic nightmare with insanity in its entrails, and that might prove to alienate and be too esoteric for a general audience. For the more adventurous, it’s bracingly eerie, daring, and crazed, no, gloriously bananas with a side of nutty. Nobody will accuse it of being boring or mass-produced, that's for sure.

On the day of arriving at his Wall Street office to receive a promotion, on-the-rise financial executive Lockhart (Dane DeHaan) is instead saddled with a task. The firm’s partners sit him down in the boardroom, explaining that none of them want to lose out on a pending merger. If Lockhart wants to keep his position, they need him to bring back the CEO, Pembroke (Harry Groener), who has allegedly been vacationing at a wellness spa in the Swiss Alps. When he arrives at the castle-like Volmer Institute, once owned by a baron who discovered healing properties in the mountaintop’s water supply, Lockhart can’t get Pembroke to leave. There’s something off about the nursing staff, including Dr. Heinrich Volmer (Jason Isaacs). All of the patients look content, getting plenty of exercise with badminton and hydrotherapy and relaxation with their steam baths, and they are seemingly well-hydrated, drinking lots and lots of water. After Lockhart decides he’s had enough, his driver takes the car off the winding road, forcing the Wall Streeter to become a patient, too, with a broken leg. As Lockhart leaves his room and starts to investigate the institute, he also comes to meet the only young patient, Hannah (Mia Goth), who claims to be a “special case” and that she can reunite with her father once she gets better. Hannah then tells him that no one ever leaves. The sanitarium is more of a prison, and Lockhart’s stay is about to be permanent.

Mounted with a forbidding sea of portent, a keen sense of intoxicating pacing, and mesmerizing visual panache by Gore Verbinski, “A Cure for Wellness” doesn’t hide the fact that something nefarious is afoot. With that said, however, the meticulously woven narrative resembles a puzzle box with a menacing cloak of mystique that consistently hovers over the proceedings. Writer-director Verbinski and co-writer Justin Haythe (who both collaborated on 2013’s “The Lone Ranger”) submerge the viewer into this sinister bubble of a world right along with Lockhart, being led blindly down a rabbit hole of paranoia. Still reminding of a young Leonardo DiCaprio (even though they only share an eleven-year age difference) with just as much talent, the supremely watchable Dane DeHaan brings all the intensity and gravitas he has to the role of the slick and cold Lockhart, who perpetually lives with bags under his eyes and probably picked the wrong time to quit smoking. As this initially spiky protagonist slips more and more into madness that one isn't exactly sure of his fate, the viewer can’t help but stick it out to see if he makes it out; that Lockhart is written with a past involving his ailing mother and having been a witness to his father's suicide helps even more. As Hannah, Mia Goth (2014’s “Nymphomaniac: Volume II”) has an innocent but ethereal and one-of-a-kind quality. Whether one thinks Hannah is a dangerous experiment or an imprisoned princess of sorts in need of rescuing, she still keeps one guessing, and her liberating dance in a pub at the bottom of the hill is memorable.

The film’s look is gothic yet manicured with a sterile serenity, and the tone is precise yet somehow controlled even when it gives way to wildly overwrought horror. Gorgeously icy and aesthetically ravishing with sights so startling and grotesque, it is an immaculate specimen, a film to drink in and make one’s mouth water. Benjamin Wallfisch’s haunting lullaby-like score accompanies the exquisitely baroque art direction and production design, and every lush, stylishly composed image by cinematographer Bojan Bazelli. Even if they only last a few seconds each, the simple techniques of a reflected shot from the eye of a taxidermied deer head or the camera being bound to the side of a moving train before going through a tunnel are dazzlers. The screenplay may not always hold up to close logical scrutiny—post-viewing, you may find yourself starting a lot of questions with, “Wait, what about the…” or “How could he…?”—but it’s a rarefied, enthralling treat when a film like this rarely goes where one expects. Such writing weaknesses are rendered minor and not really weaknesses at all when Verbinski’s arrestingly grand canvas is so right and so drenched in mood.

Taking a break from the technically laudable but bloated “Pirates of the Caribbean” films, Gore Verbinski is back to his visionary ways, concocting his most confident and uninhibited live-action effort in a while. “A Cure for Wellness” is nearly two and a half hours long, and there was surely a cure for making a few trims, but it’s a rapturous journey worth the run to get to the batshit-crazy finale. In a way, its excesses are not really flaws but perfectly organic to the kind of cinematic beast this is, and without them, it might be a different film. Not exactly a four-quadrant demographic kind of movie, it won’t be to everyone’s taste. For those who won’t mind squirming at the sight of a slithering eel-filled bathtub and wincing during a sequence with a brutally unorthodox dentistry practice, Verbinski’s latest presents a staggering, audacious vision worth seeing for oneself. More mainstream genre fare should be this brazenly weird.