Game Restart: "Jigsaw" not necessary but a morbidly fun homecoming 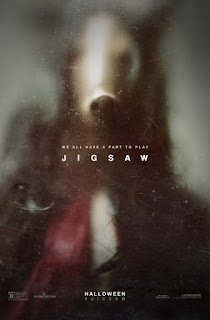 In 2004, Lionsgate and Twisted Pictures knew they had a nastily crafty little horror film in “Saw” that could make bank as a franchise, one whose raison d'être was the array of twisted and gruesome but admittedly inventive Rube Goldberg-like death traps characters would endure to prove how much they wanted to survive. For six consecutive years, another sequel was released around Halloween, and after 2010’s “Saw 3D: The Final Chapter,” it officially seemed like “game over” for this franchise. Now, in 2017, the time has come, not only for Halloween but an eighth installment, now titled “Jigsaw.” For this go-around, fresh blood has been brought in with twin filmmaker brothers Michael Spierig and Peter Spierig (2015’s “Predestination”), and that was an auspicious move, particularly for those who have a nostalgia for this Grand Guignol series.

At the start, Detectives Halloran (Callum Keith Rennie) and Hunt (Clé Bennett), along with a SWAT team, pursue a criminal onto a rooftop where he triggers a mechanism before being shot dead. This sets in motion a game in an undisclosed location, where five strangers—Anna (Laura Vandervoort), Mitch (Mandela Van Peebles), Ryan (Paul Braunstein), Carly (Brittany Allen), and another—wake up in a cell-like room with buckets on their heads and chains attached to their necks. If they don’t confess their sins and offer up a little blood, they will all be dragged closer and closer into a saw. Once some of them survive their first test, the doors open to the inside of a barn where more games await. Somehow, each corpse of the person who fails their test turns up elsewhere for the detectives to find. As they bring in the first body to the morgue, medical examiners Logan Nelson (Matt Passmore) and Eleanor Bonneville (Hannah Emily Anderson) discover that a piece of flesh has been carved out of their bodies in the shape of a jigsaw puzzle, which happens to be the calling card of the long-dead John Kramer (Tobin Bell), better known as Jigsaw. Is this a copycat of Kramer? Did Kramer ever actually die? Or, is someone carrying on his legacy again?

As helmed by the Spierig brothers, “Jigsaw” feels more like a survival thriller set in a haunted house of traps than a slab of torture porn that lingers on the suffering. After so much tail-chasing narrative convolution and sloppily thrown-together chronology-twisting from the previous films that felt retroactively constructed to keep this franchise going, “Jigsaw” starts over. Even as it cuts between the police investigation, a gorier but not-that-gratuitous “CSI” episode, and the games at hand, it is the most cleanly plotted the series has seen in a while. This back-and-forth structure doesn’t hurt the momentum this time so much as give the viewer some relief. Keeping with the franchise, the tricycle-riding clown puppet and sow mask return for appearances, and there is a rug-pulling, bait-and-switch twist in terms of whodunit that comes with a flashback-filled exposition dump, but screenwriters Pete Goldfinger and Josh Stolberg (2010's "Piranha 3D") take a chance in the finale that feels more inspired than derivative.

"Jigsaw" does well in keeping the viewer guessing, setting up plenty of red herrings in the outside world. Detective Halloran is grizzled and shady; medical examiner Eleanor is a closeted Jigsaw fan who keeps a studio of torture sculptures she designed herself; and her morgue partner, Logan, is a tortured war veteran who has lost his wife and lives as a single parent to his daughter. Even though Tobin Bell’s John Kramer died at the end of “Saw III” (an autopsy was proof in “IV”), and yet seemed alive from appearing in flashbacks throughout the previous entries, could the filmmakers have found a roundabout way to resurrect him? The “test subjects” have names, as they usually do, but like in all of these movies, all of the characters are thin with backstories more than personalities. Still, there is plenty to be gripped by and tense about.

While it almost seems odd to discuss the technical merits of a “Saw” movie, this film has none of the garish, jittery, often-obnoxious cutting of all of the previous films or the grimy warehouse interiors. Sure, the plot proper is shot in a barn, but even with editor Kevin Greutert (who cut five of the “Saw” movies), the aesthetics are slicker and more impressive with a brighter color palette and more coherent visual sense. There’s almost a restraint here, and that sense of restraint might betray hardcore fans of this franchise who bought a ticket to see gory demises. The featured carnage, though, does involve an acid-filled syringe, a leg-tightening wire, a funnel slicer, and in the film’s most effectively wince-inducing highlight, a trap in a grain-flooding silo that ups the ante when sharp objects begin getting thrown in, targeting its two victims. In the end, “Jigsaw” ranks at the top of the heap—it’s far better than “IV,” “V,” “VI,” and “The Final Chapter”—and while it’s hardly necessary, this is a morbidly fun homecoming for Jigsaw.