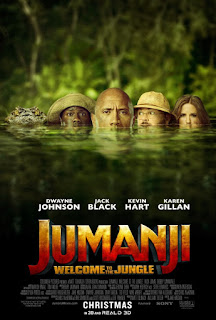 “Jumanji” was a childhood favorite in 1995, casting Robin Williams as the grown-up player of a board game that made him disappear as a teenager and brought back the dangers of the jungle with him into the real world. It was an effects-laden fantasy adventure, based on a 1981 novel by Chris Van Allsburg, that delivered exactly what it set out to do. 22 years later, “Jumanji: Welcome to the Jungle” functions more as a sequel of sorts than a reboot, where the board game Jumanji magically transforms into a video game that drops its players into the game world. No one needs to cry foul that the 1995 film was sequelized because this update turns out to be a pleasant surprise that mines more laughter than could possibly have been expected. Directed by Jake Kasdan (2014’s “Sex Tape”) and co-scribed by Chris McKenna & Erik Sommers (2017’s “Spider-Man: Homecoming”) and Scott Rosenberg & Jeff Pinkner (TV's "Zoo"), “Jumanji: Welcome to the Jungle” is a written-by-committee studio comedy capitalizing on a ‘90s brand, but how entertaining the comic situations are is predicated on the ace casting and the game performances.

Following a prologue set in 1996 where a father (Tim Matheson) finds the board game in the sand on a beach and gives it to his son, this version of “Jumanji” then sets up a situation right out of “The Breakfast Club.” Four disparate high school students—dorky, neurotic gamer Spencer (Alex Wolff); football player Fridge (Ser’Darius Blain), who used to be friends with Spencer and now has him do his school assignments; brainy, reclusive girl Martha (Morgan Turner); and vain, phone-obsessed pretty girl Bethany (Madison Iseman)—get served detention together and are ordered by the principal to clean up the school’s basement storage room. While the others begin their punishment, Spencer digs up an old gaming console with the “Jumanji” cartridge and controllers, and once they decide to play the game and pick their individual avatars, they all get sucked into the game. Landing in the jungle, Spencer realizes he’s bald and musclebound as archaeologist Dr. Smolder Bravestone (Dwayne Johnson); Fridge is a few sizes smaller as zoologist and weapons valet Franklin "Mouse" Finbar (Kevin Hart); Martha is uncomfortable wearing a skimpy shirt and short shorts as the Lara Croft-like Ruby Roundhouse (Karen Gillan); and in the shocks of all shocks, Bethany is cartographer Professor Shelly Oberon (Jack Black), not a “curvy genius” but an overweight, middle-aged man whose real name is Sheldon. As they find out, Spencer, Fridge, Martha and Bethany each have three lives apiece (which they keep track of with tattoos on their arms), so if they die once, they come dropping out of the sky with two more left. Realizing they have to actually play the game to survive, the foursome is tasked with returning a green jewel to the eye of a jaguar statue to save the jungle of Jumanji from cursed explorer Van Pelt (Bobby Cannavale). The fate of Jumanji is in their hands, as are their own fates.

Whereas the first “Jumanji” relied more on animal stampedes and encounters with spiders, this one has a little of that but puts more of an emphasis on the playful humor of a body-switching comedy as the four teens learn to grow more comfortable in their avatar bodies. The core cast does the heavy lifting and goes a long way, as if they took actual time to study the mannerisms of their younger counterparts. Dwayne Johnson gets to play on his persona in that he admirably never takes himself too seriously, and as Dr. Smolder Bravestone by way of Spencer, he effectively sells the uncertainty of a teenage boy who has never kissed a girl but now has a “smoldering intensity” and a hulking body with huge biceps and pectoralis majors. Kevin Hart mostly gets to be Kevin Hart, but this might be his most memorable screen performance, as his manic personality becomes a great fit for a body-swap concept, particularly when it comes to Mouse's strengths and weaknesses.

Karen Gillan gets to not only show her physical comedic skills, like when Bethany gives pointers to the demure Martha to distract a couple of guards with some flirtatious moves and hair-flipping, but also proves Ruby Roundhouse’s “dance fighting” strength, infectiously played to Big Mountain’s “Baby, I Love Your Way.” Jack Black is the comically inspired standout as Bethany in Sheldon’s body. While it would have been easy, acting as an effeminate a la Rob Schneider in “The Hot Chick,” he finds little details in the way he carries himself and makes enough sly choices in the name of comedy that the viewer never forgets there’s really an entitled teenage girl in there. It’s also just a plain hoot to hear Black complain, “I, like, can’t even with this place,” like a selfie-obsessed millennial girl would, and the gag in which Bethany gets to try out her newfound penis is a lot funnier than it sounds.

“Jumanji: Welcome to the Jungle” won’t be confused for being high-minded cinema, but as escapist entertainment released around Christmastime, it’s an undemanding, briskly paced romp. For gamers, there are also clever details, like how the characters learn more about their avatars by triggering boxes that list their strengths and weaknesses, and how non-player characters keep spouting the same exposition over and over without answering anyone’s questions. The viewer might start to feel the film pushing two hours, as the evil Van Pelt still has to confront our heroes, but the stakes are high enough to remain invested in whether or not the four teens return to the real world. Each character has his and her own arc, and while each of them are pretty simple, the actors make sure they feel earned. Even with the inclusion of a fifth character (the avatar being played by Nick Jonas), there is an unexpected emotional tug that works. Without overselling what is just good silly fun, “Jumanji: Welcome to the Jungle” could arguably be a study in how to make a quality video game movie.