Screaming to the '80s: "The Strangers: Prey at Night" lean, atmospheric and relentlessly tense 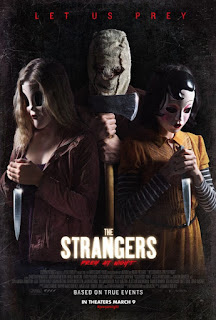 Fear may be subjective, but murderous trespassers stripping a person's home of its safety should frighten the daylights out of anyone with a pulse. Tapping into the fear of a home invasion, writer-director Bryan Bertino's “The Strangers” deserves more praise than what it received in 2008 for being a no-frills, elegantly simple, immensely creepy and nerve-jangling horror suspenser. Considering “The Strangers: Prey at Night”—more of a companion piece than a direct sequel—is coming out a decade after its predecessor, it’s a relief that the finished piece is so much more effective than it has a right to be. With couple Kristen McKay (Liv Tyler) and James Hoyt (Scott Speedman) meeting a tragically grim demise because they were home, the only connective tissue this time are the three masked strangers, only credited as “Dollface,” “Pin-Up Girl,” and “Man in the Mask,” going on to terrorize a new batch of defenseless people who happen to be at the wrong place at the wrong time. Anything but a lazy redux, "The Strangers: Prey at Night" is a crackerjack exercise in atmosphere, rising tension, and sustained terror with command of character, location, and ample retro filmmaking panache.

Before sending angsty teenage daughter Kinsey (Bailee Madison) off to boarding school, parents Cindy (Christina Hendricks) and Mike (Martin Henderson) drag along their eldest, golden boy Luke (Lewis Pullman), for the weekend to Cindy’s aunt and uncle's trailer community on Gatlin Lake. When they arrive late at night, they seem to be the only ones there. Cindy and Mike want to spend quality time with their kids, but Kinsey runs off to get some air and Luke goes after her. Meanwhile, Mom and Dad answer a knock on their trailer to a young woman (Emma Bellomy), standing in the shadows, asking, “Is Tamara home?” They chalk it up to her probably being lost, but once Kinsey and Luke find a couple of dead bodies in another trailer, the unsuspecting family must survive the night as the young woman remerges in a mask, along with two other masked strangers (Damian Maffei, Lea Enslin), to menace the familial unit with knives and axes.

Mounting and mounting with forthright force, “The Strangers: Prey at Night” is a visceral workout with no actual release until the credits roll. The sense of foreboding and portent is hair-raising and atmospheric from the opening frame, focusing on a dark, foggy, lonesome road after Kim Wilde’s synth-pop hit “Kids in America” abruptly ends and then starts up again as a truck with the titular trio comes around the bend. Even if one has not seen “The Strangers,” director Johannes Roberts (2017’s “47 Meters Down”) foreshadows what’s in store when the strangers make their first knock at the door of an old couple’s trailer. From there, writers Bryan Bertino and Ben Ketai (2016’s “The Forest”) economically develop lives in progress for the main family of four instead of cutting right to the literal chase.

The characters are drawn as an ordinary family and not just empty knife fodder. While it’s always going to be less frustrating when characters in horror movies behave like intelligent, attack mode-ready superhumans and can turn the tables on their terrorizers, Kinsey and her family all react as realistically as one would and with believable fallibility when thrown into a horrific situation they weren’t ready for, and it’s worthy of applause when some of them find it in themselves to fight back. The performers are all given enough time to flesh out their roles and evoke sympathy even before they find their fates on the line. Christina Hendricks and Martin Henderson are likable and emotionally true in every way, respectively, as Cindy, a mother who’s at the end of her rope trying to help her daughter but wants the best for her, and Mike, a good cop-type parent who knows how to get on his kids’ good sides. The fact that they would sacrifice their own lives for their children is palpable on screen. Lewis Pullman (son of Bill) is also quite good as Luke, who loves his sister, even if she hasn’t been making anyone in her family proud, and must later protect her as best as he knows how.

Chief among the cast, though, is Bailee Madison (2011’s “Don’t Be Afraid of the Dark”). In her second R-rated horror film, she gives it everything she has, physically and emotionally, as the shell-shocked Kinsey. Emotionally drained and paralyzed with fear, yet eventually giving in to the former of the fight-or-flight response, the young actress sells every action and emotion. Letting down her tough exterior to be vulnerable and understanding that her teenage rebellion no longer matters now, Madison makes Kinsey’s arc clear and complete from a headstrong teenager to a single-minded fighter and a hopeful survivor.

Widening the hunting ground and hiding spots beyond a ranch home in the middle of nowhere, the film is inspired in its use of open space within a desolate mobile-home community. One striking set-piece in the trailer park’s swimming pool, surrounded by neon-lighted palm trees, while Bonnie Tyler’s “Total Eclipse of the Heart” blares, is a particularly virtuoso marriage of image and sound, as Luke takes on one of the ax-wielding assailants on the pool deck and underwater. Cinematographer Ryan Samul (2014’s “Cold in July”) holds a shot for maximum dread, whether it's on the smiley face spray-painted on a mailbox or the swing of a swing set, but also pleasingly employs technical flourishes, like zooms and the split-diopter effect, that help differentiate it from the jittery style and often subtle framing in Bryan Bertino's original film. Whereas “The Strangers” used country records on a turntable to disquieting effect, “The Strangers: Prey at Night” makes it evident that these strangers have a penchant (and excellent taste) for ‘80s pop music, playing everything from the aforementioned “Kids in America” to Kim Wilde’s “Cambodia” and Air Supply’s “Making Love Out of Nothing at All.” Complementing Adrian Johnston’s John Carpenter-inspired score, these upbeat music choices make for a playful counterpoint to the carnage on display.

Achieving its goal to rattle and unnerve, “The Strangers: Prey at Night” is lean and breathlessly intense, calling back the spareness and ambiguity of its predecessor, while embracing conventions from slasher movies of yore. The scariest element of both “Strangers” films is that these menacing masked psychopaths have no real motive; they pick people at random and force them to be victims as if it’s a game. When Liv Tyler’s character asked why they were doing this to her and her boyfriend, the best answer she received was, “Because you were home.” This time, when Kinsey asks the same question, one of them chillingly replies, “Why not?” There are knowing nods to “The Texas Chain Saw Massacre,” “Christine,” and “Scream,” all of which point out director Johannes Roberts’ love and respect for the horror genre without coming off as mere pastiche. Moving like a shark with encroaching doom, this is an expert example of how to keep an audience on edge almost relentlessly and give them a reason to care about the people put in harm’s way.