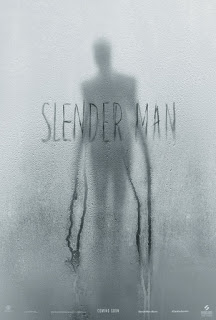 The genesis of Slender Man, a thin, tall and faceless Pied Piper of sorts who abducts children, began as a “creepypasta” meme in 2009 on Something Awful’s website forum and has since became a dangerous viral sensation. A feature film revolving around Slender Man would seem exploitative after several real-life incidents resulted in teenage believers of the fictional figure being influenced to commit violent crimes, but “Slender Man” never effectively hits a raw nerve to even be offensive. Whether or not it’s another horror film victimized by MPAA negotiations and higher-up interference to obtain a teen-friendly rating—how else to explain why it feels so tame and incomplete?—the film being distributed by Sony Pictures and Screen Gems is a mess any way you slice it. Squandering any promise it had as a cinematic campfire tale, “Slender Man” is instead a dreary, gutless, undercooked horror effort that’s slim on tension and shocks, its PG-13-rated training wheels not doing it any favors.

When high school friends Hallie (Julia Goldani Telles), Wren (Joey King), Katie (Annalise Basso), and Chloe (Jaz Sinclair) learn that their male classmates are going to summon the child-snatching Slender Man, they get together for a sleepover to do the same by watching an online video full of ominous imagery and chiming bells. A week later, Katie is the one most affected, and being the daughter of an alcoholic father, she gets her wish of being anywhere but home when she goes missing during a field trip in their small Massachusetts town. With nowhere else to turn, Hallie, Wren, and Chloe do some digging and discover Katie, prior to her disappearance, went to the woods to summon Slender Man for herself, and the only way to find their missing friend is to offer something up to the boogeyman. The three end up going to the woods with an object they each care about and sit blindfolded, but when one of them removes her blindfold and looks into Slender Man’s eyes, the remaining few begin to have their realities warped. It’s only a matter of time before they all fall under the curse of the suit-wearing entity and go missing just like Katie.

Written by David Birke (2016’s “Elle”) and directed by Sylvain White (whose only horror background stems from 2006’s direct-to-video knockoff “I’ll Always Know What You Did Last Summer”), “Slender Man” fails to capitalize on the eerie mythos of its nightmarish title figure. The film actually doesn’t start off too bad, initially showing glimmers of the moody, restrained picture it might have been at one point. When Katie is the first to disappear, the emotional reality of the remaining three friends feels more authentic than most films of this ilk, as they actually mourn the mysterious loss of their friend and have trouble going on with their normal everyday lives. From thereon, the film becomes a repetitive cycle of tedious storytelling, as each girl has her mind toyed with and comes face to face with Slender Man. Wasting the talents of physicality of Javier Botem, who has previously brought so many spindly monsters to life with practical make-up, Slender Man is a weakly defined, rather bland boogeyman, who is compared to a virus, and at his savviest, he uses FaceTime to creep out two of his victims.

The choppy second half smacks of compromise and feels noticeably mangled by studio-mandated cuts, abandoning characters who haven’t yet been taken by Slender Man. When Wren and Hallie go to Chloe’s house after she stops showing up to school and won’t answer their calls, they find Chloe staring outside her bedroom window like a zombie, and that’s the last anyone ever sees of her. A scene involving a science-class dissection comes and goes, not only failing to deliver a money shot with a scalpel that the film’s advertisements promised but actually framing the scene in a way that eliminates one of the key characters altogether. It’s just yet another scene clearly missing from the final cut. Most frustrating of all, there isn’t a legitimately unsettling moment to be found, just a series of fisheye-lensed, strange-for-the-sake-of-strange imagery; dream-within-dream sequences; and a lot of murky cinematography and dim lighting that don't help with any of the attempts at jump scares. Any “sighting” video of Slender Man is more hair-raising than anything in the film.

Tasked with carrying much of the film as main protagonist Hallie, a track-and-field star who is never seen practicing, Julia Goldani Telles (Showtime’s “The Affair”) is enough of a fresh-faced talent to give her character some shred of concern for the viewer. That’s more than what can be said for Annalise Basso (2017’s “Ouija: Origin of Evil”) and Jaz Sinclair (2016’s “When the Bough Breaks”), who just become fodder for Slender Man. It is Joey King (2017’s “Wish Upon”), the most well-known of the young actresses, who gives her all to this material as Wren, believably looking scared out of her wits during a blackout in the library stacks. Then again, none of the nondescript characters matter, each given very slender characterization. Before the tacked-on coda with a narration by a supporting character (Taylor Richardson as Hallie’s younger sister Lizzie), the last image involving a tree is the creepiest and most indelible, but not reason enough to slog through the spineless previous 90 minutes. Somehow incapable of inducing a single shiver and thoroughly unsatisfying all around, “Slender Man” makes one want to watch “Ringu,” “The Ring,” or “A Nightmare on Elm Street,” reference points that the film never reaches. If the filmmakers hoped to make Slender Man an enduring horror icon out of a fleeting cultural phenomenon with this film, they failed miserably.