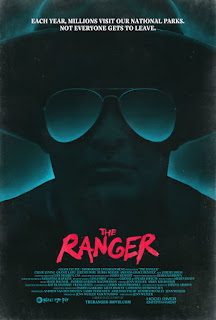 "The Ranger"—pitting punk rockers against a psychotic park ranger in lieu of neo-Nazi skinheads à la 2016’s “Green Room”—has a cool concept that it comes as a surprise no one has beat it to the punch already. Writer-director Jenn Wexler (making her feature debut) and co-writer Giaco Furino cook up such a simple, enticing plot hook for an ‘80s-inspired slasher pic in the great outdoors, but it is in its linking of a tough yet vulnerable young woman and a killer park ranger as sort-of kindred spirits that lends a little meat to an otherwise bare-bones 77 minutes of pick-‘em-off tropes. What the film often lacks in suspense, “The Ranger” finds enough freshness and an ultimate catharsis to go with its inherent conventions.

After fleeing a city punk club busted by the cops, pink-haired Chelsea (Chloë Levine) is cornered on the street and then saved by hot-headed boyfriend Garth (Granit Lahu), who stabs a police officer. Hopping in a getaway van belonging to runaway Amber (Amanda Grace Benitez), the two go on the lam with their friends, couple Jerk (Jeremy Pope) and Abe (Bubba Weiler). Garth hatches a plan for them to lay low, squatting in Chelsea’s late uncle’s cabin in the woods until everything blows over, but first, these rowdy kids stop at a convenience store in town, where their littering and disrespectful back-talking rubs a park ranger (Jeremy Holm) the wrong way. Once making it to the cabin, they tag trees, build a bonfire, and play their loud punk music, much to Chelsea’s chagrin as her past catches up with her. When a shot is fired, ending the party and injuring one of them, the park’s dementedly strict ranger begins taking out the punks for violating the laws of his mountain.

Setting a tone of uncertainty, “The Ranger” opens with a gunshot echoing over the edge of a cliff with a young Chelsea (Jeté Laurence), who will be forever changed. For the next thirty minutes, the film is a loosely paced hang, tagging along with these unruly, drug-addled punk-rock characters as they go on the run and mistake a cabin in the woods as a safe haven. Save for Chelsea, the rest of the punk characters are thinly developed and mostly unlikable, though it’s no fault of the performers, who play the obnoxious, authority-hating kids as written.

Chloë Levine (2016’s “The Transfiguration”) is most sympathetic and brings extra shading to edgy “final girl” Chelsea, who has repressed the traumatic memory of the last time she visited her uncle (Larry Fessenden) at his cabin; since the tragic death of her uncle, her life has continued to be filled with toxic men, including Garth, Chelsea’s controlling asshole of a boyfriend. It is nice to see a same-sex couple normalized without anyone commenting on it and then getting equal-opportunity to become slasher fodder, too, but if Jerk and Abe had been distinguished beyond their physical appearances to make us care about them, their demises would sting more and be more affecting. The ranger in question is not a random, masked killer but an authority figure from Chelsea’s past, and Jeremy Holm (TV’s “Mr. Robot”) essays a heightened, threatening version of Smokey Bear with unforced creepiness in the ownership he feels he has over Chelsea. Until a deliriously strange scene in the ranger’s basement where a survivor is placed in a cage, Holm’s performance is gleefully off-kilter yet in control at all times.

As a nasty genre piece, “The Ranger” does pack a visceral kick once it gets going, with the ranger’s separate use of a bear trap and an axe viciously bloody and appropriately wince-inducing. The time period isn’t clear, but without cell phones, leaps in plausibility are solved in that these kids can’t easily call for help once their lives are placed in danger. When writers Jess Wexler and Giaco Furino gradually show their hand, the film grows a bit anticlimactic, not milking as much tension out of some of the showdowns as it could have (a brief cat-and-mouse game in an empty convenience store comes to mind). Before finishing strong with a fiercely satisfying final confrontation in a watchtower, the film firmly sticks with Chelsea, whose personal conflict and arc are the main thrust of the narrative. Ostensibly a scrappy indie throwback to the slashers of yore, “The Ranger” holds more impact as a survival drama about a young woman facing her buried trauma in her male-dominated life and taking her freedom back once and for all.