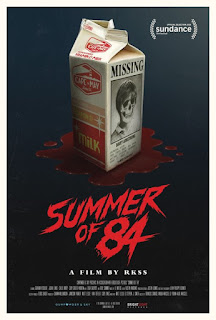 "Stand by Me." "The 'Burbs." "Disturbia." Netflix sensation "Stranger Things." Comparisons come easy with “Summer of ’84,” a Spielbergian pastiche of a boy-who-cried-wolf coming-of-ager, a Hardy Boys mystery, and a horror film. With the oft-recycled iconography of kids riding around on their bikes, using walkie talkies, and solving a mystery over the course of one memorable summer, the film hits a nostalgic sweet spot without trying too hard. Collectively known as Road Kill Super Stars (RKSS for short), directors François Simard, Anouk Whissell, and Yoann-Karl Whissell, who showed their stuff in 2015’s giddily over-the-top VHS-schlock homage “Turbo Kid,” opt for a lower key and a more dangerous vision, working from a script by writers Matt Leslie & Stephen J. Smith. If “Summer of ’84” feels generally derivative, it has familiar charms and affection for its influences, as well as a pall of darkness and melancholy.

“It all might seem normal and routine, but the truth is: the suburbs are where the craziest shit happens,” claims 15-year-old conspiracy theorist Davey Armstrong (Graham Verchere) in the early days of his 1984 summer vacation in Ipswich, Oregon. When he's not on his neighborhood newspaper route, Davey spends his summer days with his trio of close friends—Tommy “Eats” Eaton (Judah Lewis), Dale “Woody” Woodworth (Caleb Emery), and Curtis Farraday (Cory Gruter-Andrew)—hanging out in their treehouse to look at dirty magazines and debate between Ewoks and Gremlins, frequenting the local bowling alley, and playing a nighttime game of hide-and-seek. A dark cloud soon hovers over the town of Ipswich as a serial killer the news calls the “Cape May Slayer” begins murdering teenage boys. When Davey considers Mr. Wayne Mackey (Rich Sommer), the nice, single police officer across the street who buys a lot of dirt for his garden, as a suspect, he convinces his pals to observe Mackey’s daily routine, break into his home, and find some concrete evidence to prove his theory is correct.

Without beating one over the head, “Summer of ’84” uses its specific timeframe as a feeling of more innocent times juxtaposed with a threat right across the street. The film takes its time establishing Davey, his home life with his parents, and his close-knit circle of friends before the mystery of the serial killer gets underway with stakeouts and investigations. As the main entry point into the story, Graham Verchere (TV’s “Fargo”) makes Davey an appealing boy hero; notably, when Davey is caught snooping around by Mr. Mackey and must put on a normal face, Verchere does a more believable job than most actors in recent memory. While they might feel molded out of archetypes, the remaining three kids are all likable, and they look and sound like real kids. Caleb Emery is a sympathetic standout as the sensitive, chubby Woody, and Judah Lewis and Cory Gruter-Andrew make the most of the half-formed Eats and Curtis. A charismatic Tiera Skovbye is also welcome as dream girl Nikki Kaszuba, the pretty next-door babysitter whom Davey has pined for and peeps on, but she actually gives him the time of day. Rounding out the cast is Rich Sommer (TV’s “Mad Men”), who admirably underplays the suspect part of Mr. Wayne Mackey and keeps one guessing as to whether he really is the “Cape May Slayer” or not.

Clearly aiming for a template of movies the filmmakers were raised on, “Summer of ’84” easily feels like it could have been made the very year in which it is set (Le Matos’ killer synth-heavy score and the use of Bananarama’s “Cruel Summer” help seal the deal). Like many before it, the film knows when to offer some levity, courtesy of the adolescent boys’ amusing interplay, to release the tension. Daring to play with expectations, the nervy final fifteen minutes throws in a sucker punch that might put off some viewers, but it only heightens the life-and-death quotient and the false sense of security that much more. Needless to say, as a throwback to films of yesteryear, “Summer of ’84” does not feel the need to reinvent the wheel, but it solidly captures the time, not only the era but a young boy’s first brush with mortality and doom-laden paranoia when nobody believes a kid.