"30 Minutes" too uneven and tasteless 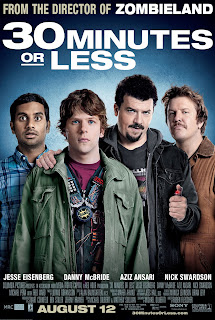 They can deny it all they want. Ruben Fleischer ("Zombieland") and first-time screenwriter Michael Diliberti claim to only be "vaguely aware" that their effort bears an uncomfortable resemblance to the real-life 2003 tragedy of Erie, Pennsylvania pizza man Brian Wells forced to rob a bank with a bomb strapped to his neck. Whether it actually be based on that grim event or not, "30 Minutes or Less" isn't funny enough anyway. It is funny how "Bad Teacher" and "Horrible Bosses" weren't mean enough but still gave off a gleeful foul-mouthiness. Sure, it's the most mean-spirited of the Raunchy R-rated Comedies this summer, but to call it offensive would make it sound effective. As a Beavis and Butthead bruise-black comedy, "30 Minutes or Less" is just strained and uneven.

Jesse Eisenberg, the go-to actor for playing nebbish, whip-smart young men, plays Nick, a Grand Rapids, MI twentysomething slacker whose aimless life consists of smoking pot and delivering pizzas under 30 minutes (or you get your tomato pie for free!). One of his deliveries takes him to a construction site, where he's confronted by two ape-masked thugs who chloroform him and strap a bomb to his chest. The apes are Dwayne (Danny McBride), an idiotic slacker who needs $10,000 to pay a hit man to off his Marine old man (Fred Ward), and his best pal Travis (Nick Swardson), a moronic slacker who creates the bomb vest. They tell Nick he has nine hours to pull of a bank robbery before he's toast, so he turns to his roommate Chet (Aziz Ansari), a school teacher, for help.

What begins with some sharp dialogue and frantic pacing, "30 Minutes or Less" takes a dip into tiresome mediocrity. Characters don't have to be actively likable people, but it helps to make them even the least bit sympathetic. Here, nearly everyone is a jerk in one way or another, unlikable and foolish, and none of them come out achieving their goal (i.e. Dwayne and Travis desire of opening a tanning salon as a front for a brothel). Not so interested in bathroom humor as it is in queasy violence and wildly outrageous verbal exchanges of the "did-he-really-say-that?" variety, "30 Minutes or Less" has a half hour's worth of scattered laughs but a bad aftertaste lingers afterwards. And there are two bromances going on here: a tolerable one between Eisenberg and Ansari, and the other (with McBride and Swardson) foul and distasteful.

Eisenberg surpassed expectations of making the inherently unlikable Mark Zuckerberg a conscionable, compelling protagonist in 2010's "The Social Network" (there's even a Facebook nod), but here, that's not the case. The role of Nick was irredeemable even with Eisenberg. As the token "Slumdog" buddy, Ansari has great timing for manic, wide-eyed panic. What do you know, McBride gets to play another immature jackass, but it's just one more trip to the well of his gratingly one-note shtick. Neither he nor Swardson can prove their worth as fearlessly goofy comic performers with material this vile. The lovely Dilshad Vadsaria is violated by the script, playing Chet's twin sister who slept with Nick. The more inspired casting choice of the useless bunch (without actually being inspired) is the Latino assassin Chango, played by an irritatingly over-the-top Michael Pena.

If you've always imagined a comedy with rape jokes, homophobic and racial slurs, the words "fuck" and "pussy" used over a hundred times (sometimes in the same sentence), and "that's what she said" jokes, get a load of "30 Minutes or Less" in only 83 minutes.