Oh, Mother: "Mothers and Daughters" well-intentioned but tedious and flat 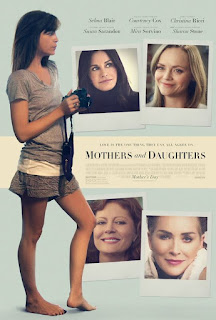 Intertwining multiple stories about motherhood is apparently an impossible formula to crack lately. It didn’t come too easily for veteran Garry Marshall with last week’s terrible clunker “Mother’s Day,” featuring Jennifer Aniston, and it doesn’t work for first-time feature director Paul Duddridge’s “Mothers and Daughters” (originally titled “Mother’s Day”), co-starring Aniston’s “Friends” castmate Courtney Cox. Like that starry holiday fiasco, this indie has plenty of proven talent in front of the camera, so lack of talent isn’t the problem here. It’s just that screenwriter Paige Cameron strings together so many mother-daughter clichés, perhaps expecting the on-screen talent to somehow elevate everything on the page, and director Duddridge (along with co-director Nigel Levy) is unable to visualize any of it in an interesting way without the use of text messaging, FaceTime, or just an old-fashioned phone call ad nauseam. Because one or two stories simply weren’t enough, it is a fool’s errand to pick out the most compelling vignette.

Set in Manhattan—primarily the Pig + Cow Building—“Mothers and Daughters” vaguely connects five stories as single photographer Rigby Gray (Selma Blair) recollects her mother. Before she goes on tour to photograph hunky musician Nelson Quinn (Luke Mitchell), Rigby must decide if she wants to go through with an unexpected pregnancy or not. For bra designer Georgina Scott (Mira Sorvino), she has the sudden urge to get in touch with the daughter she gave up for adoption. She’s about to be featured in a fashion magazine run by cold, high-powered Nina (Sharon Stone), who’s butting heads with daughter Layla (Alexandra Daniels) for throwing away her Princeton education to follow her real aspirations. Also, lawyer Becca (Christina Ricci) realizes her sister, Beth (Courtney Cox), is really her mother after the death of her grandmother whom she thought was her mother her entire life. Finally, Gayle (Eva Amurri Martino) is in debt with husband Kevin (Paul Wesley) as he tries launching a bakery business. Having estranged herself from her parents by running away and getting married, she tries renewing her relationship with her mother, Millie (Susan Sarandon), after two years over Skype.

A female-centric slice-of-life that wishes to be an eye-opener on what it means to be a mother, “Mothers and Daughters” offers precious little insight by criss-crossing the problems of each mother and daughter and then rarely venturing beyond the shallow end. 2009’s “Mother and Child” did this sort of thing much, much better. Covering adoption, family secrets, and possible abortion, the film is at least able to approach these heavier subjects with some honesty, but in most cases, depth is out of the script’s reach and there’s an easy resolution for all of them. To possibly stretch the film out to a full 90 minutes, there is even an unnecessary scene shared between Rigby’s camera-lens candy Nelson and his estranged mother (Elizabeth Daily). It’s through FaceTime, go figure, and the scene that precedes it has Nelson nearly raping a drunk girl at a bar. Only his mother could love this scumbag. Then there’s Paul Duddridge’s thoroughly bland direction. There’s little attempt to vary the shots and blocking beyond monotonous one-on-one conversations, via phone or computer, that it becomes hard to remain engaged in anything the characters are saying. Perhaps it was a set choice for the here and now when our communication is rarely in the flesh anymore, but this is supposed to be about relationships, not “Unfriended 2.”

“Mothers and Daughters” really does resemble a Lifetime movie that managed to get lucky with assembling an impressive roster of actresses and then wastes just about every one of them. Selma Blair is offbeat enough of an actress for her Rigby to be the throughline, but the way her “will-she-or-won’t-she-get-an-abortion?” subplot is handled slowly loses its nerve in exchange for romantic convention with Rigby's obstetrician having a sudden interest in her. At the mercy of such patchy, dramatically flat writing, no one has much of a chance to be more than unremarkable. Of course, the only mother-daughter relationship that genuinely rings true is the one portrayed by real-life mother-daughter pair Susan Sarandon and Eva Amurri Martino. Their time together is spent entirely on a computer screen, economically creating a history during a brief Skype session. Sarandon must have had a free afternoon, but she doesn’t phone in anything, finding some nice subtlety in a teary-eyed seven-minute scene.

Everyone involved probably thought they were making a worthwhile women’s picture to turn around the gender inequality in the film industry. It cannot be denied that “Mothers and Daughters” means well, as it even makes a dedication to all mothers before the credits roll. That’s all well and good, however, there is no reason it should be such a tedious, simplistic slog that relies more on contrived plot mechanics and stating the obvious than saying anything with nuance or at least a fresh point-of-view. One of these days, someone is going to celebrate the career of motherhood again and, hopefully, it will result in a better film.