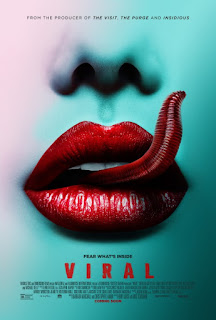 “Catfish” directors Henry Joost and Ariel Schulman have a second feature out this year, following the Emma Roberts-Dave Franco cyber-thriller “Nerve,” and this time, they’re not saying anything prescient or plausibly scary about technology. No, “Viral” is yet another quarantine thriller, this time no adults allowed. Screenwriters Christopher Landon (2015’s “Scouts Guide to the Zombie Apocalypse”) and Barbara Marshall (TV’s “Terra Nova”) lay the simple plot and character groundwork adequately—we get just enough from the characters to care whether they see life to the end credits or not—and the film has a few effectively squirmy moments, even if the parasitic threats here are visually familiar of FX's "The Strain." It is technically well-made, but once the plotting flattens out and the fates of the characters can only be met a couple of ways, “Viral” doesn’t add anything to the zombie-virus movie canon that we haven’t seen before.

Nice, studious Emma Drakeford (Sofia Black-D’Elia) and spiky older sis Stacey (Analeigh Tipton) have recently moved to a California town with their father, Michael (Michael Kelley), who’s separated from the girls’ mother and now teaches at their new high school. Instead of experiencing the challenges of fitting in, these teens will have to face something more globally threatening. There is an outbreak of the Worm Flu somewhere in the United States, and to prevent it from spreading, the military quarantines the Drakeford family’s desert community. When Emma and Stacey get separated from their father, they don’t listen to him and stay home but instead attend a house party that turns out to be a giant mistake. Stacey gets spewed in the face with an infected teen’s blood, leaving Emma and neighborly crush Evan (Travis Tope) to fight to stay healthy themselves and hopefully save Stacey.

Amidst a lot of holing up in a house and the toss-in of predictable jump scares, “Viral” periodically delivers the eerily gross goods. What happens to the town’s Patient Zero, Emma’s friend Gracie (Linzie Gray), is startling and a hide-and-seek moment between the sisters and one of the infected supplies tension, as does a wormy encounter with Evan’s stepfather (Stoney Westmoreland). Emma and Stacey don’t waste time in putting themselves in harm’s way by foolishly attending a bacchanal down the street, but Sofia Black-D’Elia (2015’s “Project Almanac”) and Analeigh Tipton (2013’s “Warm Bodies”) do click as polar-opposite sisters without overplaying their differences. Their undying love is also palpably felt when fateful decisions must be made. Despite a global infection, the film agreeably remains smaller in scale and works more on a human level that way. “Viral” doesn’t quite slither under one’s skin enough times to make a recommendation, but those in for a decent genre time-killer could probably do much worse.