Dead for Real: "Fear, Inc." a clever meta lark before it gets greedy 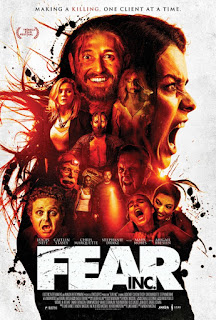 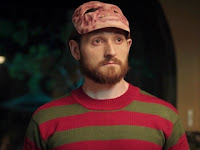 “Fear, Inc.” could have been next-level stuff for its genre. A name-checking horror buff’s rewrite of “The Game” and “April Fool’s Day" with extra shout-outs to “The Shining,” “A Nightmare on Elm Street,” “Friday the 13th,” “Scream,” and “Saw,” director Vincent Masciale and writer Luke Barnett’s feature expansion of their 2014 short of the same name comes so close to fully working that you can almost taste it. The nods and affection for everything horror are fun to spot, but this is a meta horror-comedy that is never as funny or as scary as it wants to be.

A junkie of horror movies and narcotics, recently unemployed ne’er-do-well Joe Foster (Lucas Neff) somehow has a beautiful, affluent Australian girlfriend, Lindsey (Caitlin Stasey), whom he lives with in a luxurious home in the Hollywood Hills. On their date to a haunted house—Joe’s idea, not Lindsey’s—he is unimpressed and wants to be scared. A stranger (Patrick Renna, grown-up ’90s child star of “The Sandlot” and “The Big Green”) overhears and drops the couple a company card for Fear, Inc., a service that offers custom scares to its paying clients who want an intensely real night of terror. When childhood friend Ben (Chris Marquette) and wife Ashleigh (Stephanie Drake) come into town for Halloween, Joe ends up calling the number on the card for tickets. The voice on the other end makes it clear that they are sold out, but then the masked killers come out and Joe is in for a rush. Is Fear, Inc just a harmless interactive gimmick, or will Joe get way more than he signed up for?

Opening with a twentysomething professional (Abigail Breslin) getting chased through a parking garage as she struggles to cancel her custom-thrill service on the phone, “Fear, Inc.” gets some mileage out of the premise of a “custom-scare company” and the central “is-it-or-isn’t-it?” tension. The viewer cannot help but be in a panic right along with the characters, who feel as if they are thrown into an actual horror movie, while Joe at the same time keeps pointing out certain genre tropes and referencing certain movies. Director Masciale and writer Barnett do manage to get the balance between goofy slacker humor and prankish fear mostly right on occasion, and when they do, one gets a glimpse of the superior film this could have been. And, though Joe is an affable fool who can’t get enough of Fear, Inc.’s tricks and even makes it easy for the masked killers by leaving the back door of his house slightly ajar, Lucas Neff (TV’s “Raising Hope”), Caitlin Stasey (2014’s “All Cheerleaders Die”), Chris Marquette (2003’s “Freddy vs. Jason”), and Stephanie Drake (TV’s “Mad Men”) are all likable company.

“Fear, Inc.” is a clever lark with plenty of promise in its conception but too much of a first-draft feel in the execution. Amidst the horror flick ribbing, there is a dangerous undercurrent, but it soon deflates the greedier the film gets with one “just kidding” reveal too many. A few pesky questions also arise for those paying attention. As we later find out, the Abigail Breslin character in the first scene was Ben’s boss, but Ben is visiting Los Angeles from Maryland, so does the crew behind Fear, Inc. cover both coasts? Also, one of the contrived twists involving a self-defense strangulation doesn’t make any sense when looking back at what comes next. A film that can be self-referential and double as a solid representative of the genre it so clearly adores is always an exciting proposition. Audiences were spoiled with genre-busters like 1996's “Scream,” 2011's “Tucker & Dale vs. Evil,” 2012's “The Cabin in the Woods,” and 2015's "The Final Girls," but “Fear, Inc.” doesn’t stick the landing. Director Vincent Masciale and writer Luke Barnett try out so many different endings that the wickedly bleak note they conclude with feels more like a cruel joke.