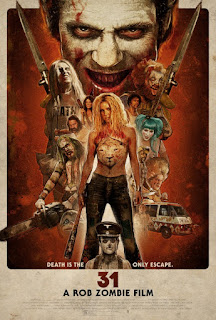 Having shown some maturation with 2013’s creepy, more artistically disciplined “The Lords of Salem,” auteur Rob Zombie harkens back to 2003's “House of 1000 Corpses” and 2005's "The Devil's Rejects." His latest effort blessedly doesn't feel as assaultive and thrown-together as the former, a shrill, unpleasant mess, nor is it on the same scripting level as the latter, the filmmaker's magnum opus. Rest assured, his crowd-funded and low-budgeted “31” is grimy, nasty and down-and-dirty but as pure and blunt as a grindhouse B-movie should be. Zombie leaves all hope and polish for dead, never playing it safe and caking his film in ugly grime yet again. The idea behind this one comes from Zombie reading a statistic that Halloween is the top day of the year where people go missing, so as a result, “31” is like “The Most Dangerous Game” with murderous clowns.

On Halloween 1976, a van of carnival workers headed to their next venue in the dusty Southwest is ambushed and kidnapped. When they come to, they become the victimized attractions for Father Murder (Malcolm McDowell), Sister Dragon (Judy Geeson), and Sister Serpent (Jane Carr), three wealthy Satanists in powdered wigs who wage bets on who can survive 12 hours in a labyrinthine factory. The name of the game is “31,” and once one sadistic clown is unleashed upon the remaining group at a time, all Charly (Sheri Moon Zombie), Venus (Meg Foster), Roscoe (Jeff Daniel Phillips), Panda (Lawrence Hilton-Jacobs), and Levon (Kevin Jackson) can do is pick their defensive weapon and not get cut into ribbons. It's kill or be killed, but the odds are not in their favor.

As uncomplicated plot loglines go, “31” is pretty much death-for-death’s-sake carnage with one goal for the protagonists: stay alive. The carnie “contestants” are thinly drawn but more appealingly colorful than most archetypal “Rob Zombie Movie” characters who usually just spout off oh-so-adorably crass things, however, we really only care by default whether they live or die. Luckily, Meg Foster’s earthy matriarch type Venus and a fierce Sheri Moon Zombie (the director’s wife, muse and lucky charm) as Charly get to be the main badasses.

The antagonists, though, are a more interesting lot. Where else are you going to find a Spanish-speaking midget Nazi named Sick-Head? E.G. Daily (best known for playing Dottie back in 1985’s “Pee-wee’s Big Adventure” and her endless voice credits, including Tommy Pickles from Nickelodeon’s “Rugrats”) gets to make 55 look like just a number and puts her own demented sexpot spin on Sex-Head, a dollfaced, lollipop-licking killer. Then, with his whole face smeared in white make-up and his shit-eating grin stained by his own blood, Richard Brake is the unsettling face of “31.” Established from the black-and-white pre-credit monologue where he blathers like a juicy Quentin Tarantino psychopath character before killing a priest, Brake’s work as talkative evil incarnate Doom-Head is scarily committed and disturbingly fascinating. Dressed as French aristocrats, Malcolm McDowell, Judy Geeson and Jane Carr are having a twisted ball as the game’s puppet masters but feel disconnected from the rest of the film, especially since they somehow have the ability to be omniscient spectators.

A visual mixed bag with enough striking, atmospheric imagery (for one, Rob Zombie knows how to light the hell out of a graffitied bathroom), “31” does not look like it could have been made by anyone else. As a horror filmmaker, he is skilled at injecting no-holds-barred danger and urgency in a cramped industrial space, not sparing anyone if he can help it and almost doing for Steven Tyler’s “Dream On” what he did with Lynyrd Skynyrd’s “Free Bird” and its powerful usage in “The Devil’s Rejects.” Like in all of his films, except maybe “The Lords of Salem,” there is a trashy stridency that can be off-putting here, even if that's the point. The impact of some of the kills is also occasionally bungled by wildly spasmodic handheld camerawork and rapid-fire editing—two simultaneous fights with chainsaw-wielding clown brothers Schizo-Head (David Ury) and Psycho-Head (Lew Temple) barely hang by a coherent thread—but director Zombie has a recognizable artistic style and he’s sticking to it. Alternately numbing and rattling, “31” is a balls-to-the-wall, carnivalesque killing spree that doesn’t merely settle for in-your-face and goes for bludgeon-to-the-head. In other words, it’s probably exactly what Zombie fans will crave.