Love Thy Master: Sincere "A Dog's Purpose" does what it needs to do 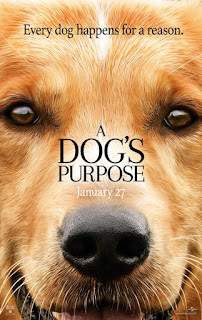 “A Dog’s Purpose” could have been called “Aww: The Movie.” That isn’t necessarily a knock on the quality of the film, but this boy’s-best-friend story delivers the sort of schmaltz where you either succumb to its emotional manipulation and allow your heart to melt, or you don’t. Based on the best-selling 2010 novel by W. Bruce Cameron, this film adaptation chronicles the decades-spanning life of a loyal dog, being reincarnated as a different canine breed each time with a different owner. As directed by Lasse Hallström (2014’s “The Hundred-Foot Journey”), who’s been down this kibble-paved road before with 2009’s wonderful (and severely overlooked) Richard Gere starrer “Hachi: A Dog’s Tale,” "A Dog's Purpose" is two-dimensional and a little treacly but just as sincere and exceedingly sweet with an unabashed heart as an Amblin production of the comfort-food variety can be. It’s a pretty morbid invitation when you stop to think about the premise virtually being the conclusion of "Marley & Me" over and over, however, points should be granted for effectively playing into the sentiments of audiences who actually seek a good, sappy cry. There's no shame in that.

Reborn a red retriever, one pup (voiced by Josh Gad, “Homeward Bound: The Incredible Journey”-style) experiences an evolution of multiple lifetimes, all of them leading to learn his purpose. Nearly dying from heat exhaustion in the truck of a pair of dog snatchers, he is saved by a boy, Ethan Montgomery (Bryce Gheisar), and his mother (Juliet Rylance), and named Bailey. The retriever is the boy’s best friend even into his high school years when Ethan (taken over by KJ Apa), a promising football player hoping to get a full scholarship to University of Michigan with lovely girlfriend Hannah (Britt Robertson). Eventually, Bailey is put down and then reincarnated as a female German Shepherd named Ellie, working as a search-and-rescue dog for lonely Chicago police officer Carlos (John Ortiz). After a fatal day on the job, Ellie is reborn in the 1980s as a corgi, back to being a "he" named Tino, and cared for by college student Maya (Kirby Howell-Baptiste), and then later again as a St. Bernard by a woman (Nicole LaPlaca) and her abusive husband (Michael Patric) for a short time. After that, will Bailey circle back around to his first master (now played by Dennis Quaid) and learn his purpose for living?

Adapted by author W. Bruce Cameron and screenwriters Cathryn Michon, Audrey Wells, Maya Forbes & Wally Wolodarsky, “A Dog’s Purpose” is straightforward in its telling, but not every emotional landing sticks. Not unlike Steven Spielberg’s “War Horse,” the other owners in Bailey’s life are revolving doors, and none of their bonds with Bailey resonate as deeply as the one with Ethan, whose “My Dog Skip”-ish 1960s-set story gets the most attention anyway. Director Lasse Hallström’s filmmaking is safe and mostly obvious, sometimes lacking the subtlety for a story like this to be even more wrenching and thoughtful, and the transitional flourishes—the entire screen glows with twinkly lights to signify the reincarnation process—are hokey. The performances are all fine, bland at worst and serviceably earnest at best. The affable Bryce Gheisar and KJ Apa acquit themselves well as the elementary and high school-aged counterparts of Ethan, while a solid Dennis Quaid picks up the role as the eldest one. As the young and older versions of Hannah, Britt Robertson and Peggy Lipton (TV’s “Mod Squad”) are both lovely, convincing that the former would age into the latter. Above all, however, the dog casting directors and trainers need to be commended, and since the viewer is able to get into the head of Bailey, who better to hear than the endearing Josh Gad?

Setting aside the film's imperfections, director Lasse Hallström finds a tonal balance that works overall without laying on the appropriate emotions with a gavel to a painfully maudlin, gag-worthy degree. With this being a more family-friendly effort, "A Dog's Purpose" is for the most part inoffensive, save for the continuous inevitability of death and some domestic melodrama. This is a dog movie after all, so, of course, it can’t be without a few wacky “Beethoven”-like antics during an important dinner that could ensure Ethan’s hard-drinking father, Jim (Luke Kirby), a promotion. There is no canine leg-humping at least. “A Dog’s Purpose” isn’t immune to clichés, but it has warmth and displays a sunny disposition amidst the predictable cycle of death and rebirth. It should work on anyone who has ever owned, loved and lost a dog, calling on the waterworks, while the stone-hearted can look the other way.