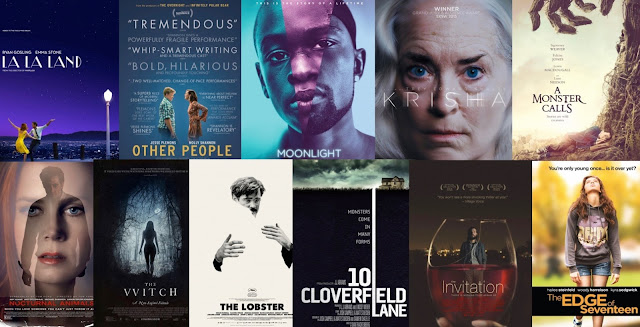 2016 had its ups and downs, like any year, but it was an impressively good year for movies. It was so good that it was tough to find homes for all of the very worthwhile films, and this is the first time since my top 10 in 2011 that two films have tied. Here are the 10 (okay, 11?) best films of 2016. These are the films that I can see myself revisiting again and again and left a lingering impact. That's no small feat, but these films did it.

10) The Edge of Seventeen -  Teenage angst is hardly a beacon of originality in the annals of high school cinema, but most paramount is in how it is executed. Beyond just a disarming vehicle to watch Hailee Steinfeld shine in a lead role, the film breaks ground by pinpointing exactly how it feels to be a teenager, from first-time director Kelly Fremon Craig’s script that observes and crackles with wit, edge and wisdom. Far from being just another trite, generic teen movie, “The Edge of Seventeen” deserves to be seen by anyone who has ever been a teenager, whether that ship has sailed twelve years or forty years ago. Honest, affecting and whip-smart.

9) The Invitation/10 Cloverfield Lane (tie) - There had to be a tie for this spot because both “The Invitation” and “10 Cloverfield Lane” are two great slow-burn thrillers with the genuine power to thrill. The first is so ominously suggestive and tensely coiled that, by the time we realize where this dinner party of estranged friends is going, it hits hard in the gut. Director Karyn Kusama makes a tour de force of a comeback behind the camera, expertly tightening the screws and twisting our expectations. Then there’s the feature debut of Dan Trachtenberg with “10 Cloverfield Lane,” a spiritual successor to “Cloverfield” that works like gangbusters in its own right. Executed with such unquestionable know-how in working its audience to a fever pitch, this chamber thriller is riveting and tautly wound.

8) The Lobster - The estimably weirdest film of 2016, “The Lobster” is also one of the most sublimely audacious with a tone so precise that it can’t help but be one of a kind. Greek director and co-writer Yorgos Lanthimos (“Dogtooth”) builds a near-dystopian future where one must find a romantic partner in 45 days or risk being turned into an animal of their choice; an understated Colin Farrell plays a paunchy loner who chooses a crustacean. Startling, darkly witty and unsuspectingly moving in its mix of shock, absurdist sense of humor and melancholy, “The Lobster” is like nothing you’ve ever seen before. For the most adventurous, it cannot and will not be compartmentalized.

7) The Witch - Robert Eggers’ “The Witch” is the fourth remarkable debut from a first-time filmmaker on this list, and it’s so masterfully crafted that it is even being endorsed by the Satanic Temple. Set in 1630, New England before the Salem Witch Trials, this folktale is unsettling and transfixing as one watches uncompromising evil encroach upon a pastoral family of faith and the suspicion of the innocent escalating. A slow-burn mood piece rich in portent, dread and ambience, “The Witch” requires patience, but it is the most accomplished horror film of the year.

6) Nocturnal Animals - It was seven years since fashion designer turned filmmaker Tom Ford’s last film (his impressive 2009 debut, “A Single Man”), but “Nocturnal Animals” is one hell of a knockout. Gritty fiction seamlessly bleeds into a slick reality as a chic, affluent L.A. art gallerist (Amy Adams) receives a manuscript from her ex-husband (Jake Gyllenhaal) and reads it, realizing the dark and violent yarn is a bleak response to their failed marriage. As the desconstruction of an artist’s veiled influence through the prism of a disturbing, nihilistic revenge-fueled noir thriller, this is a cunningly told example of literary storytelling mastery that coalesces and then blindsides with its cumulative power and sears in the back of the brain.

5) A Monster Calls - Unique and profound, cathartic and transcendent, “A Monster Calls” deftly marries another story about grief and loss with a fantastical angle from the vision of adolescence. Author Patrick Ness adapts his own novel and director J.A. Bayona beautifully translates to the screen this young adult fairy tale, approaching mature themes such as the fragility of life, the knowledge of a loved one’s mortality, and the necessity of anger after loss. Tough-minded and unsentimental but warm without becoming treacly, “A Monster Calls” packs a wallop and earns every emotion. Whether or not it is commercially viable for families will be up for debate, but this is a special film that should be vital viewing for everyone, young and old. This one is for the ages.

4) Krisha - The black sheep of a family tries being a better human being in the ferocious, powerful “Krisha,” a remarkable feature debut from 28-year-old writer-director-editor-producer Trey Edward Shults. Without a whiff of self-indulgence, it’s a family affair with Shults’ aunt Krisha Fairchild as the titular Krisha, a sixtysomething-year-old woman making an effort at Thanksgiving to visit her family. She harbors so many demons that Krisha may not be able to keep it all together much longer. An intimate, unflinching character study and familial slice-of-life, “Krisha” is a gut-punch of jittery, devastating power that actually reinvents dysfunctional family, addiction and redemption dramas into a singular work of art.

3) Moonlight - Watching the sublimely empathetic “Moonlight” is like living in someone else’s skin for two absorbing hours, and that a film can fully achieve what it strives to do is a triumph. Adapted from Tarell Alvin McCraney’s play “Moonlight Black Boys Look Blue,” writer-director Barry Jenkins tracks the evolution of a gay black boy who’s just trying to survive in Florida and longs for human connection. Three different actors portray the same introverted boy who goes by a different name in different stages of his life, and Alex Hibbert (as “Little”), Ashton Sanders (as “Chiron”), and Trevante Rhodes (as “Black”) are all achingly exceptional. Integral supporting performances by Mahershala Ali, Naomie Harris, and André Holland also leave deep impressions. Immersive, compassionate, tender and quietly powerful, “Moonlight” has a reverberating impact that follows one home.

2) Other People - Just calling “Other People” an illness drama would be underselling its worth. It’s too personal and smartly observed to ever fall into mawkish sentimentality, which it easily could have, and it never feels the need to hit big dramatic and comedic moments; it just feels true to life. An auspicious writing-directing debut from former “SNL” writer Chris Kelly, this autobiographical slice-of-life is deftly modulated, insightful, honest, sensitive, bittersweet and even sometimes very, very funny. Aided by two outstanding performances from Jesse Plemons and Molly Shannon as a gay TV writer and his mother who’s dying of cancer, this must-see makes one feel long and deeply.

1) La La Land - “Whiplash” writer-director Damien Chazelle’s rhapsodic valentine to classic Hollywood and its city of lovers and dreamers was the most joyous experience of 2016. It was so much more than just a lighthearted homage to the golden age of the Technicolor movie musical and more bittersweet than a rose-colored fairy tale. Emma Stone and Ryan Gosling spark electric chemistry with their third on-screen pairing, this time the most adorable and meaningful as two struggling artists who meet cute in Los Angeles. Gloriously exuberant, swoon-worthy, unconditionally romantic and exhilarating, “La La Land” is sheer nirvana for movie lovers.