All in the Family: "Hereditary" knocks you on your ass and festers under your skin 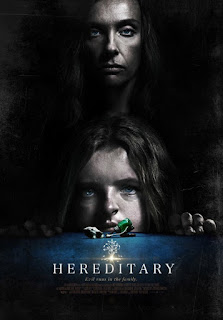 Of all genres, the horror genre unfairly gets a bad rap most of the time, but it is actually the most cathartic. When done right, a horror film can not only frighten and rattle but confront existential anxieties and the uncomfortable darkness of the human condition. Horror fans, themselves, can also be tough customers, although being more discriminating and patient to wait for a great film can be rewarding. With that said, Ari Aster’s electrifying feature debut “Hereditary” is honest-to-God, face-melting, gut-level horror, the cinematic equivalent of a nervous breakdown into madness fueled by loss and grief. Never underestimate a first-time writer-director like Aster, whose attention to detail is meticulous and loaded with suggestion, his pacing so masterfully assured, and his narrative profoundly disturbing, risk-taking and thematically rich. One immediately knows that he or she is in the hands of a veritable filmmaking craftsman with the know-how to transcend any genre to the level of intoxicating art, and as for “Hereditary,” which has already been branded this generation’s “The Exorcist”: brace yourselves.

After the death of her 78-year-old mother that should cause tragic mourning, miniature artist Annie Graham (Toni Collette) struggles over the complicated emotions of her loss. As she says in her eulogy, Annie’s mother was a strange, secretive woman with whom she was estranged for years before her dementia and mental illness worsened. Annie at least has support from her shrink husband, Steve (Gabriel Byrne), but their children, pot-smoking 16-year-old son Peter (Alex Wolff) and withdrawn, not-quite-right 13-year-old Charlie (Milly Shapiro), each had disparate relationships with their grandmother; Peter can’t seem to muster much emotion following the funeral and Charlie, who was Grandma's favorite, is a strange bird altogether, sleeping in her treehouse some nights and severing a bird head for her collection. To add more stress to her plate, Annie fastidiously creates miniature tableaus in her home workshop and has a gallery exhibit deadline to meet. When she decides to sneak off to a bereavement support group to share her psychological scars, Annie confides in a woman named Joan (Ann Dowd), who has lost two members of her family. It’s not until tragedy strikes the Graham family again that Annie’s life really starts to unravel, and then there’s the discovery that maybe she didn’t know her mother at all.

A deeply raw and unflinchingly harrowing domestic drama at its core, “Hereditary” has one invested in the plight of the vulnerable Graham family well before they disintegrate into a hopeless, irreversible hell beyond their control. Startling and courageous, this is an elegantly helmed slow burn with a tangible sense of foreboding and bursts of unsparing, heart-stopping horror that come in unexpected places and indelibly horrific imagery that instantly burns into one’s retinas. For anyone who thinks they know where the film is going, all bets are off, but everything is part of Aster’s insidious, soundly constructed master plan. When the film begins curdling into a take-no-prisoners nightmare and reaches an unforgettably distressing boil, it’s like watching a fiery vehicle with faulty brakes careen down a hill toward a cliff. All of the breadcrumbs—a necklace here, words etched into the wallpaper there—lead to an astounding crescendo that leaves all hope for dead and allows audience members to share the characters’ intensely quaking anxiety and discombobulation over the evil that’s been brewing all along.

Ari Aster directs the hell out of his first film, ominously opening on an outside treehouse and slowly panning to a dollhouse diorama that mirrors the Graham family’s own house and tracking closer to son Peter’s bedroom that suddenly springs to life when his father walks in, and it’s a neat, bewitching technical trick that sets the creepily off-center tone. The bravura lensing by cinematographer Pawel Pogorzelski’s (2017’s “Tragedy Girls”) is visually potent with a commanding mise-en-scène in each and every thoughtfully composed frame, and editors Lucian Johnston and Jennifer Lame cut effectively, often leaving the unimaginable to the imagination, while also flipping from nighttime to daytime (and vice versa) like a light switch that further enhances the mounting dread. This is to say nothing of the pulsing, shuddersome sound design and the unsettling, discordant score by former Arcade Fire saxophonist Colin Stetson.

Toni Collette is a riveting, shattering powerhouse, bravely exposing a full range of emotions and layers as Annie, a wife and mother trying but failing to keep it together as the bastion of strength. In one of several piercing scenes, Annie lashes out at her own son at the dinner table with volatility, unleashing pent-up resentment and fury, and to Joan, she poignantly reveals her past sleepwalking episodes, particularly one involving paint thinner and a match. Gabriel Byrne is solidly understated as concerned but skeptical husband and father Steve, holding strong for his family in need even as a dark force closes in on all of them. Alex Wolff (2017’s “Jumanji: Welcome to the Jungle”) is excellent as Peter, being put through the grueling wringer as much as Collette's Annie and fearlessly, believably revealing so much vulnerability. He sells every character facet—teenage slackerdom and disaffectedness, puppy love, guilt, anger, fear and confusion—as well as a petrifying freakout during class. It would be unthinkable to not say the name, Milly Shapiro. Destined to break out after her debut film, 15-year-old Shapiro (who originated the title role of “Matilda” on Broadway and won a Tony Honor) is a remarkable find and more distinct than any child actor working today; Charlie's bedtime conversation with her mother, asking the morbid question, “Who’s going to take care of me…when you die?” is one of the many chilling harbingers of doom. Ann Dowd also makes a lingering impact as Joan, a seemingly trustworthy woman who gives Annie solace.

Going into “Hereditary” and knowing as little as possible beforehand is the only way to go. Above merely dishing out effective jolts—although, what “The Conjuring” did with the hide-and-clap game, this one does do the same with a tongue cluck—Ari Aster is operating on a deeper level, his film digging into unbreakable familial bonds and poisoned lineage and then culminating in unstoppable, Greek tragedy-level consequence and truly wicked implications of what's to come after the story ends. He puts his characters first and grounds the possibly supernatural proceedings with the devastation of a helplessly fate-sealed family, stripped of their free will and manipulated by a higher force not unlike Annie manipulating every piece of her dioramas. Even when the circumstances are heightened to extremes and could feel overwrought on screen, the film never seems less than controlled and tonally of a piece, beginning with an on-screen obituary and ending with what feels like a knife to the viewer's heart. Like a vivid, merciless nightmare that won’t be easy to shake or forget, “Hereditary” knocks you on your ass, festers under your skin, and leaves one haunted long after the end credits. Good luck not staggering out of the theater because this is a diabolically bold and unnerving piece of horror cinema that’s bound to endure.