Christmas Horror Stories: "All the Creatures Were Stirring" a rare but uneven low-budget Christmas horror anthology 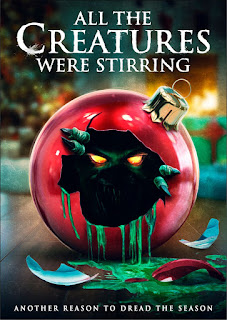 Available on DVD, On Demand and Digital Video, the film will also be premiering on Shudder on December 13th.

Husband-and-wife filmmakers Rebecca and David Ian McKendry make their shared writing-directing debut with “All the Creatures Were Stirring,” a rare low-budget anthology film of horror tales set on Christmas Eve and featuring a smorgasbord of actors recognized in the horror community, as well as the fresh-faced Constance Wu (2018’s “Crazy Rich Asians”). Enticing in conception but not always successful across the board in execution, the film is rough around the edges, even more so than anthologies can often be. There is an inherently mixed-bag quality to the omnibus structure, as not every storyline can possibly be tantamount to a bull’s-eye, and in the case of “All the Creatures Were Stirring,” only two out of the five are solid.

“All the Creatures Were Stirring” is framed through an awkward first date between Jenna (Ashley Clements) and Max (Graham Skipper), who meet up to attend a play called “All the Creatures Were Stirring” at a Los Angeles community theater. As the director (Maria Olsen) comes out on-stage with a title card for five short tales and the actors put on their amateurish performance in an avant-garde way with few props, each story plays out. First up is “The Stockings Were Hung,” in which a low-key Christmas office party with a gift exchange goes horribly wrong when a Jigsaw-like mastermind rigs the presents with different surprises. It works up suspense, but ends before it really has a chance to get going. “Dash Away All” involves suburbanite Eric (Matt Long), already late to get home to his wife and parents for his birthday/Christmas dinner after doing some shopping, locking himself out of his car with his cell phone inside. In the parking lot, he comes across a van, occupied by Sasha (Catherine Parker) and Frankie (Makeda Declet), and asks to use their burner phone to call for assistance. Little does he know that these good Samaritans need him, too. This thread stands out the most for being deceptively fiendish and unpredictable.

“All Through the House” centers on Christmas scrooge Chet (Jonathan Kite) on December 24th, defacing his neighbor’s lawn decorations and denying a donation for his neighbor’s child before sitting at home alone. Before he knows it, Chet is visited by three ghosts to teach him a lesson about the spirit of Christmas. It’s an off-kilter Dickensian tale—our coke-snorting scrooge doesn’t realize he snorts tinsel—but never as amusing as it thinks it is being. “Arose Such a Clatter” might be the weakest in which private investigator Guy (Mark Kelly) accidentally hits Blitzen, the reindeer, on the road and then finds himself being stalked by a vengeful Rudolph. This one could have been a lot of fun, and though there are knowing noir and giallo touches in terms of color filters, editing, shooting style, and production design, the story itself feels like forgettable filler.

“In a Twinkling” stands as the most refined and confident segment from a production standpoint in which Steve (Morgan Peter Brown) prepares for a full moon, getting ready to chain himself for the night right before his group of friends (led by Constance Wu) knock on his door to party. As lycanthropy shifts into ‘50s-style extraterrestrial mode and black-and-white with splashes of color (not to mention a shot from 1964’s awesomely bad “Santa Claus Conquers the Martians”), this “Twilight Zone” story is amusingly weird, and it’s fun to see the adorably funny Constance Wu. Finally, the last story, “And To All A Good Night,” circles back around to the wraparound segment, and while it has a creepy, David Lynchian vibe, it underwhelms like everything else.

While it might not be the McKendrys’ aim to elicit any major frights, one doesn’t take away much of anything from this spotty collection of darkly tinged holiday stories. Under these low-budgeted prospects, “All the Creatures Were Stirring” seems to have been a labor of love by its makers, but the project is ultimately hurt by its lack of resources. Even though it’s set in Los Angeles, the film displays little specificity when the majority of the stories are shot in dull interiors. In spite of budgetary restraints, it can’t get a pass for feeling like a disappointing missed opportunity.