The Love Bot: Fun, sweet "Bumblebee" is what the previous five "Transformers" movies should have been 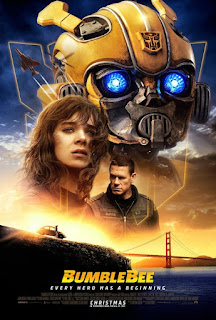 A prequel-reboot of the Hasbro toy line, “Bumblebee” is what 2007’s “Transformers” and its subsequent four sequels should have been all along: a coming-of-ager that follows in the tradition of those "boy and his dog" pictures, only this time a girl and her robot. “Adorable” wouldn’t be the operative word to describe any of Michael Bay’s numbingly noisy, soulless, pandering movies, which gave big-budget studio moviemaking a bad name, but director Travis Knight (2016’s “Kubo and the Two Strings”) and screenwriter Christina Hodson (2017’s “Unforgettable”) do the series right, turning it around with a lighter touch and a big, marshmallowy heart worn on the hood. If you always wanted to feel something—anything—in a “Transformers” movie with the bonus of a pleasing ‘80s soundtrack, now is your chance.

On planet Cyberton, the Decepticons have waged a civil war with the Autobots, forcing Optimus Prime (voice of Peter Cullen) to send B-127 (Dylan O’Brien, in the first scene) to Earth and establish a base for his fellow rebels. Crash-landing near San Francisco in 1987, B-127 is sighted and evades capture by the military, led by Agent Jack Burns (John Cena), but once ambushed by an incoming Decepticon, he has his memory and voice wiped clean before taking cover as a yellow Volkswagen Beetle and going into hibernation mode. Enter 17-year-old Charlie Watson (Hailee Steinfeld), still reeling after the fatal heart attack of her mechanic father and not seeing eye to eye with her mother (Pamela Adlon), stepfather (Stephen Schneider), and younger brother (Jason Drucker). All Charlie wants is her own car, and when uncovering the yellow Beetle in the scrap yard of her father’s auto body shop on her 18th birthday, Charlie dusts it off and takes it home. To her surprise, Charlie finds her car to actually be a self-configuring robot, whom she renames "Bumblebee" and discovers to have more humanity than the military that wants to neutralize him. Charlie and Bumblebee form an unlikely friendship that only gets stronger once two Decepticons, Shatter (Angela Bassett) and Dropkick (Justin Theroux), land on Earth and use the military to take out their Autobot target.

Like 1982’s “E.T. the Extra-Terrestrial” and 1999’s “The Iron Giant” with a touch of 1968's "The Love Bug," “Bumblebee” trusts in the gentle, touching friendship between a mortal young person and an alien lifeform, and in doing so, the story remains stripped-down and focused as it should be without coming off rudimentary. Having a fresh pair of eyes and talent like director Travis Knight, who has background in stop-motion animation at studio Laika, makes a world of difference in why “Bumblebee” shockingly works as well as it does. By making the viewer actually care about and relate to the humans and, yes, even the metallic but quite expressive and endearing Bumblebee, the film then makes way for humor that is playful and actually amusing; rousing action set-pieces that are skillfully and coherently staged; brisk pacing that still takes a breath for a quiet, well-earned emotional moment; and seamlessly integrated effects that are given a chance to be admired without choppy editing. And, not only contributing to the service of nostalgia, the soundtrack is well-chosen, featuring Tears For Fears’ “Everybody Wants to Rule the World,” Steve Winwood’s “Higher Love,” and The Smiths’ “Girlfriend in a Coma,” and germane to how Bumblebee comes to speak again as he channel surfs on the car radio. That the film makes sure Bumblebee gets introduced to “The Breakfast Club” and then ends on that ‘80s mainstay’s iconic Simple Minds musical cue is just the cherry on top.

Grounding the story with her naturalism, Hailee Steinfeld (2017's "Pitch Perfect 3") is engaging and charismatic—and when isn’t she?—as Charlie Watson, who’s a bit of a social misfit but passionate about music and loses herself in fixing up cars. That the script actually gives Charlie something to do, even when the Decepticons show up to destroy Bumblebee, is refreshing; her diving talent might even come in handy at some point. It might sound like a low bar, but hands down, Steinfeld gives the strongest performance opposite a Transformer. The rest of the cast makes the most of the material, particularly Jorge Lendeborg Jr. (2018’s “Love Simon”), enormously likable as Charlie’s slightly geeky neighbor and amusement park co-worker Memo, who gets shut down every time he tries to introduce himself; John Cena (2018's "Blockers"), providing his comic timing as Agent Jack Burns, who’s initially antagonistic but not without a few shades of gray; and Pamela Adlon (FX's "Better Things"), who brings authenticity to an otherwise stock role as Charlie’s mother. Not just by default but on its actual merits, “Bumblebee” has a leg up on any live-action movie with “Transformers” in the title, to the point that there’s really no comparison. It may still involve sentient, self-configuring robots, but there’s a sense of fun and more undeniable warmth and sweetness than any of the previous movies combined. Who knew it was possible?