Wheel of Fortune: "The Upside" pat and predictable but mostly transcended by Cranston and Hart 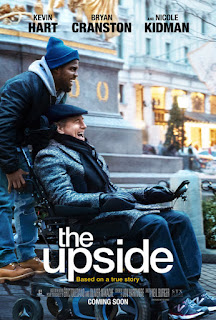 The 2012 French film “The Intouchables,” itself based on the true story of the unlikely friendship between white, wealthy quadriplegic Philippe Pozzo di Borgo and Algerian caregiver Abdel Sellou, was such an enormous success in its native country that one could bet a star-studded English-language remake would be on the horizon in no time. Now titled “The Upside” and co-starring Bryan Cranston and Kevin Hart, the story remains pretty much the same, and the result is a shameless crowd-pleaser that cynics will find mawkish. It is pure formula, which is to say that it’s pretty pat, clichéd, and wholly predictable, and yet still squeaks by on the good will of its actors who transcend the material.

Out on parole after doing time for petty crimes, Dell Scott (Kevin Hart) is a streetwise ex-con with a family that doesn’t want him and no job prospects. When he attends a job interview at the penthouse of one Phillip Lacasse (Bryan Cranston), Dell assumes it’s for a janitorial position, but growing impatient as he waits, he barges in on the interview process with Phillip and his loyal assistant, Yvonne (Nicole Kidman), demanding a potential employer’s signature just to appease his parole officer and show that he’s trying to find work. A widower and a quadriplegic from a hang gliding accident, Phillip wants someone who won't take extraordinary measures if he stops breathing. Enter Dell, who has an edge and an attitude and might be the least qualified to be Phillip's live-in "life auxiliary," but Phillip thinks he will be the perfect fit, much to the chagrin of Yvonne. Besides having to lift Phillip into his chair each morning and drive him around, the gig is good money for Dell, as he clears a couple grand per week and catches up with paying child support to ex Latrice (Aja Naomi King) and son Anthony (Jahi Di’Allo Winston), but it also gives both men a chance to become pals and change each other.

As director Neil Burger (2014’s “Divergent”) and writer Jon Hartmere generally adhere to the source material beat for beat with minor tweaks, like transplanting the story to Manhattan (though shot in Philadelphia), “The Upside” comes down to a familiar trajectory with very few to no surprises. It's the same arc in any feel-good movie about a relationship forming between two people made opposites by race and socioeconomic status, and this time, one of them is disabled. As reductive as it may sound, Phillip opens his ears to Aretha Franklin and learns to loosen up with a joint every now and then, followed by having the munchies and ordering 14 hot dogs (!), and Dell grows to appreciate the finer things in life like art and opera arias. Bryan Cranston and Kevin Hart are irresistible foils, dishing out amusing moments that will earn light chuckles, although a joke involving Hart’s Dell being skittish about changing Phillip’s catheter (or even uttering the word “penis”) gets laid on pretty thick and Dell fumbling inside Phillip’s high-tech shower is stale. Otherwise, Cranston colors the grieving Phillip with more depth than the script ultimately sheds for him, as well as a comic slyness to make Phillip's bond with Dell believable, and the role of Dell gives Hart a solid opportunity to inch closer to handling more dramatic duties, while still playing well within his comedic wheelhouse.

A broader-strokes echo of its French predecessor, “The Upside” aims to push emotional buttons, and while it’s not always effective, it is certainly hard to dislike. Since this is Cranston and Hart’s show, Nicole Kidman is fine but untested as Phillip’s no-nonsense assistant Yvonne, and Julianna Margulies has one scene as the woman with whom Phillip has been having an epistolary relationship until finally meeting, courtesy of Dell’s power of persuasion. The upside is that “The Upside” is better than most January fare, coasting along on the likable performances of its actors.