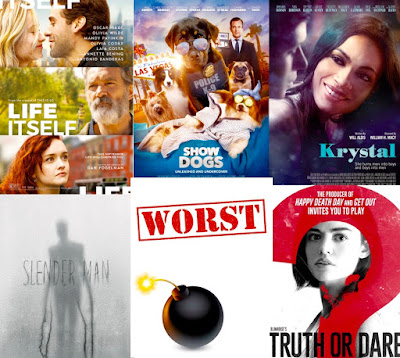 This year, there were either fewer bad movies or I just dodged a slew of bullets. Nobody sets out to make a bad movie, but these were the five worst in my eyes.

Dishonorable Mentions (in alphabetical order): Acrimony; The 15:17 to Paris; The Open House; Peppermint; The Possession of Hannah Grace; Tag; Winchester

5) Blumhouse’s Truth or Dare - By now, the reliable (and profitable) Blumhouse Productions has proudly earned the right to put their name before the on-screen title for the first time, but regrettably, “Blumhouse’s Truth or Dare” is their first major misfire that looks more like a generic Asylum Entertainment release and actually makes one long to watch Blumhouse's own “Ouija” instead. Watching characters forced to play a game and then die in bloodless ways, one gets the nagging feeling that this film was edited down to a toothless PG-13 rating to appease a teen demo. While last year’s surprise “Happy Death Day” didn’t need an R-rating to be fresh and fun, the bottom-feeding “Blumhouse's Truth or Dare” actually aims to be scary, but there isn’t a solitary scare to its name and, most frustrating of all, it’s thoroughly sanitized. Truth? “Blumhouse’s Truth or Dare” is a waste of time that will whet a horror buff’s appetite for something more devilish and satisfying that never comes. Next, can we get "Blumhouse's Apples to Apples?"

4) Slender Man - The genesis of Slender Man, a thin, tall and faceless Pied Piper of sorts who abducts children, began as a “creepypasta” meme in 2009 on Something Awful’s website forum and has since became a dangerous viral sensation. A feature film revolving around Slender Man would seem exploitative after several real-life incidents resulted in teenage believers of the fictional figure being influenced to commit violent crimes, but “Slender Man” never effectively hits a raw nerve to even be offensive. Whether or not it’s another horror film victimized by MPAA negotiations and higher-up interference to obtain a teen-friendly rating—how else to explain why it feels so tame and incomplete?—the film being distributed by Sony Pictures and Screen Gems is a mess any way you slice it. Squandering any promise it had as a cinematic campfire tale, “Slender Man” is instead a dreary, gutless, undercooked horror effort that’s slim on tension and shocks, its PG-13-rated training wheels not doing it any favors. If the filmmakers hoped to make Slender Man an enduring horror icon out of a fleeting cultural phenomenon with this film, they failed miserably.

3) Krystal - What is one supposed to make of “Krystal,” yet another baffling directorial effort from William H. Macy after 2017’s “The Layover”? Poorly conceived and unsure of what it wants to do or be, “Krystal” is a failed feel-good charmer full of Southern drawls and gonzo Devil imagery. Nothing works and nothing rings true. Climactic emotions arrive unearned. Nick Robinson plays 18-year-old Taylor, a self-proclaimed “old soul” suffering from PAT, who puts on a biker persona when he meets and falls head over heels with Krystal (Rosario Dawson), an ex-stripper/hooker/addict with a heart of gold, at an AA meeting. Everyone in the fine ensemble seems to be acting in entirely different movies: rapper Tip “T.I.” Harris is in a stalker thriller, and William Fichter, as the worst doctor ever, belongs in a sitcom, or maybe he’s right at home and nothing else fits. Rosario Dawson does give a true performance as the titular Krystal in an otherwise phony story, where nobody acts like a real person. Unfortunately, like everything else, Krystal eventually succumbs to the machinations of the script.

2) Show Dogs - Harmless and genial in nature as it may look, “Show Dogs” is actually a creatively lazy, notably unfunny dog, as it’s never, not once, laugh-out-loud funny and not particularly clever. Mercilessly but surprisingly, the flash-in-the-pan “Who Let the Dogs Out” is never played, but “Turner & Hooch” is referenced and there is a meta line about talking dog movies not being made anymore, and yet, here we are. Doody calls for a plot, even in a goofy, over-the-top action comedy like this, but just think “Miss Congeniality” with talking dogs in which a Rottweiler member of the K-9 unit (voice of Chris “Ludacris” Bridges) and a human FBI agent (Will Arnett) must team up to go undercover at a prestigious dog show in Las Vegas and save a smuggled panda. Setting a new low for family entertainment, “Show Dogs” is just lame, pandering, bizarre kids-will-like-anything dreck. And if young children love anything more than talking animals, it’s a kidnapping and smuggling plot where the climax involves a bad guy firing shots and an adorable CG panda getting thisclose to a charter plane propeller. Even if options for an early-summer movie the entire family can enjoy are sparse right now, everyone deserves better than the grim “Show Dogs.”

1) Life Itself - Why did “Life Itself” have to steal the name of the beautiful 2014 documentary and memoir of film critic Roger Ebert? Known for creating TV’s “This Is Us,” writer-director Dan Fogelman strains to be deeply profound and resonant with a whirlwind of tragedy through three chapters of happenstance, like an interconnected mosaic not unlike “Crash” and “Babel.” Instead, this painfully contrived and patly realized drama purports that Life is an unreliable narrator, as tragedy befalls every character. Fogelman seems to be his own unreliable narrator, as his film seems to know very little about life and thinks it’s clever and meaningful when there’s far less than meets the eye. The cast is an embarrassment of riches, including Oscar Isaac, Olivia Wilde, Annette Bening, Mandy Patinkin, Olivia Cooke, Antonio Banderas, and Laia Costa, but all of them play tragic pawns rather than characters, and individual moments of authenticity just blow in the wind of this mawkish self-importance. Profundity might have existed in its intent, but watching the sprawling and conceptually ambitious “Life Itself” is like experiencing an emotionally sadistic prank. If “Final Destination” aimed and failed for deeper meaning and employed less creative deaths, it would look like this clunky, trite, overwritten charade.