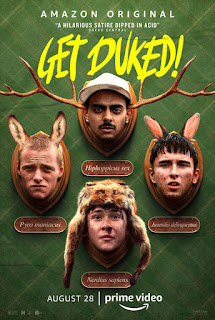 Formerly known as “Boyz in the Wood” during its festival run at the South by Southwest Film Festival, “Get Duked!” is a highly amusing, enthusiastically directed genre mash-up that came out of nowhere. Hip-hop tracks, hallucinogenic rabbit droppings, and “the greater good”-spouting antagonists from 2007’s “Hot Fuzz” converge for a dementedly original package with a distinctly Scottish flavor. The directorial debut of writer-director Ninian Doff (who’s directed music videos for The Chemical Brothers, Miike Snow and more), “Get Duked!” marks its territory as one of the year’s little surprises full of swagger and an overall free-wheeling sensibility.

Not exactly part of “the promising youth of tomorrow,” Dean (Rian Gordon), Duncan (Lewis Gribben), and DJ Beatroot (Viraj Juneja) are a trio of Glasgow reprobates volunteered by their headmaster to embark on a character-building camping program called the Duke of Edinburgh’s Award. Led by their new substitute outdoor education teacher, Mr. Carlyle (Jonathan Aris), into the Scottish Highlands, these three are intended to prove their skills involving teamwork, foraging, and orienteering. In the backseat of their van happens to be a fourth boy named Ian (Samuel Bottomley), who’s actually excited for the trip and more inclined to follow the rules. Once Mr. Carlyle sends the boys off, they veer off path, only to be hunted by a pair of masked, weapon-wielding aristocrats, The Duke (Eddie Izzard) and The Duchess (Georgie Glen), for a most dangerous game.

Opening with a Boy Scouts of America-like promotional VHS tape for the Duke of Edinburgh's Award, “Get Duked!” manages to keep subverting expectations again and again, much like the best of Edgar Wright in his Three Flavours Cornetto trilogy. In getting to know these four boys, the film is already irreverent, but once they get to the Highlands, things grow increasingly more fraught with danger. A push-in on a park bulletin board full of missing child posters here, a close-up of a corpse's foot sticking out of the ground there. Amidst the wildly nutty, surprisingly very bloody shenanigans of these boys running afoul, there is also a “meanwhile” subplot involving the local cops, Sergeant Morag (Kate Dickie, in a rare straight-faced yet comic performance), and PC Hamish (Kevin Guthrie), who believe they have a much bigger case than just catching a bread thief. Even if she just has one scene, Alice Lowe (2017’s “Prevenge”) is hilarious as the Superintendent, monologuing about the most grave of crimes: the theft of bread!

Rian Gordon, Lewis Gribben, Viraj Juneja, and Samuel Bottomley are all up-and-comers, and they form a profane yet distinctly defined and ultimately endearing unit. These boys could have easily been obnoxious, unlikable hooligans. Instead, Dean just wants to get high; Duncan is underestimated for his dumb demeanor; Dj Beatroot is a posh try-hard; and Ian is the wholesome one. Each perfectly cast actor has his own memorable character moment, and every seemingly throwaway gag gets a satisfying payoff. As the high-authority Duke and sword-waving Duchess, Eddie Izzard and Georgie Glen make a deliciously malevolent pair of heavies.

In terms of some zippy cutting and the fact that Ninian Doff seamlessly smashes through a few different genres—coming-of-ager, stoner comedy, thriller—"Get Duked!" really does wear its Edgar Wright influences on its sleeve, but it comes into its own rather than coasting on pastiche. As one can't stop smiling as these delinquents keep getting themselves into crazy hijinks with the locals, Doff throws in a stealth bit of social commentary to give this fun, surprisingly tense ride a little more weight and substance: the older Duke and Duchess want to eradicate the impure youth in the U.K.’s class hierarchy. Don’t let this gleefully anarchic romp fall by the wayside.